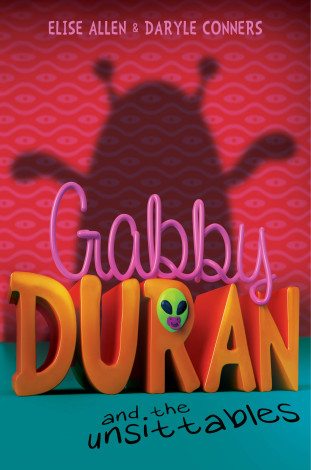 Gabby took a deep breath. There was only one response but saying it out loud still felt momentous, like everything in her life was about to change.

Edwina smiled. “Then by the power vested in me by the Association Linking Intergalactics and Earthlings as Neighbors, I hereby declare you Gabby Duran, Associate 4118-25125A: Sitter to the Unsittables.”

That’s the book blurb for Gabby Duran and the Unsittables, a new young reader book from Disney Publishing Group coming out on May 12. Disney has teamed up with GeekMom to offer a giveaway to a reader that includes not only the book, but a few other goodies, which are pictured below. Yes, that’s a glow-in-the-dark mini-frisbee and there’s also a $50 Visa gift card included. To enter, use the widget at the bottom of the post.

The excerpt above is a good indication of the book’s tone. Here’s the official publisher description:

The Association Linking Intergalatics and Earthlings (hereby known as A.L.I.E.N.) has a new member. After months of investigation, Gabby Duran, Associate 4118-25125A, has proven herself to be a babysitter extraordinaire. Her celebrity clients fly her around the country to care for their rambunctious little humans. Our spy, Associate 4118-23432B, otherwise known as Edwina, believes Gabby can be trusted with the truth: aliens are living among humans on Earth. And here at A.L.I.E.N we believe that even extraterrestrials need a babysitter now and then. No one was up to the task…until now.

After accepting the top-secret position, Edwina has paired our new associate up with her first charge, a little girl from the planet Flarknartia. The timing for associate 4118-25125A is less than ideal. It’s a school day on Planet Earth, Gabby’s audition for the solo part in the band is tonight, and this tiny alien is a bit more than meets the eye.

Can Gabby Duran, Associate 4118-25125A, First Sitter to the Unsittables, keep her otherworldly charge safe in the unpredictable halls of middle-school and keep A.L.I.E.N hidden?

What the description doesn’t show is the beautiful bordering around each page, which has a little alien face at the top, an added touch that makes the book truly feel like Gabby’s dossier.

The book is co-written by Elise Allen, an Emmy-nominated writer and New York Times best-selling author of the young adult novel Populazzi and the Jim Henson’s Enchanted Sisters chapter books, and Daryle Conners,  an award-winning writer, filmmaker, and video game designer. She writes joke and riddle books and has designed many game titles for the PC and iPhone/iPad including Harry Potter and the Sorcerer’s Stone, Scene It? Harry Potter, Hot Wheels Slot Car Racers, and Scene It? Twilight Saga.

To find out more about Gabby Duran and the cast of characters in the book, visit the official site. The book is already on pre-order at Amazon, B&N, and all other book retailers.

31 thoughts on “Giveaway: Have You Ever Sat An Alien Baby Before?”