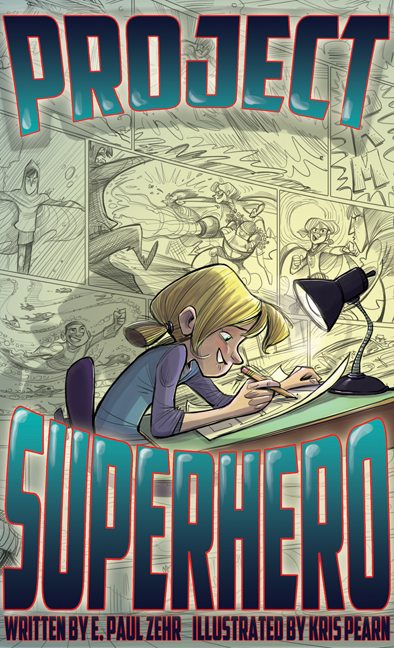 Project Superhero‘s Jessie and her friends are the kids you want your daughter to be and be friends with in the eighth grade. She has an enviable comic book collection, and she loves journalism and science. (Things like the likelihood of Black Canary’s scream being possible bothers her.) Her friend Audrey is an electronics lover who has a room full of computer parts and builds robots.

In Project Superhero, written as Jessie’s journal, their class embarks on the Superhero Slam, a year-long 8th-grade project to explore heroes and superheroes—culturally, scientifically, and sociologically—culminating in a one-on-one debate for superhero supremacy.

Jessie’s stories will sound familiar to grown-up comic book geeks. They’re your friends talking about the characters. (“Zatanna…has cool sorcery powers, but I am kind of not so much into “magical intervention” when it comes to superheroes.”) They’re talk about women in and working on comics. (“There are lots of women on that team but they are still X-MEN—what is up with that?”) And it’s a pre-teen girl talking about her friends, parents, and figuring out who she is through the lens of her love for comics.

and Inventing Iron Man: The Possibility of a Human Machine

. Project Superhero is a fiction/non-fiction hybrid extension of those themes targeted at tweens, particularly girls. Within the fictional story of the Superhero Slam, the book includes Jessie’s letters to and real replies from:

Project Superhero is all of this wrapped in a package of a lot of comic book history with a dash of science, history, and language lessons. It’s also delightfully illustrated by Kris Pearn, who co-directed Cloudy With a Chance of Meatballs 2.

Though described as for 8- to 12-year-olds and perfectly appropriate for that audience, some of the heavier topics (9/11, friends in the hospital, dealing with medical issues like depression and insulin injections) may warrant a parental pre-read before giving it to the younger end. (You know your kids the best.) I’ll be happy to hand it over to my 9-year-old comic book fan.

GeekMom received a PDF of Project Superhero for review.