You love artists and their artwork, but want to somehow make a game out of it? No worries. It’s already been done for you.

The Art Game: Artists’ Trump Cards is a bit like the old card game War. It has very simple instructions and you can play with any number of people. The cards are much thicker and higher quality than normal playing cards, and have a pleasing matte finish. Each of the 32 cards contains a painting of a famous or less-famous artist, such as Pablo Picasso, Salvador Dali, Edward Hopper, David Hockney, Cindy Sherman, or Damien Hirst. In addition, there is a brief biography, and numbers corresponding to six categories that are integral to gameplay. The categories are Influence, “Shock of the new” effect, Versatility, Top auction price (USD), Critical reception, and The “beautiful” factor. Other than the auction price, I’m not sure how the values are computed, however.

To play, deal the cards out equally, face down. Figure out who goes first. Players then hold their entire pile of cards face up, so they can only see one card. The first player chooses a category from their top card and reads it and its number out loud. The other players then read the value of the same item on their top cards. The player with the highest value wins all of the top cards and places them on the bottom of their pile. The winning player then gets to go next. If the top value is shared by more than one person, all the cards are placed in the middle and the same player chooses again. Whoever wins that round also wins the cards in the middle. The winner is the person with all the cards in the end.

If you think that it does sound a bit like War, I would agree with you.

In theory, players can learn quite a bit about each artists’ work and stats as they play, but in practice, players will likely just utilize the numbers on the cards to try to win. The game itself doesn’t teach too much about an artist’s works, but the information contained therein is a great starting off point for further study. You may learn that a Picasso painting sold for a vast sum. Research what painting it was. Or that Marcel Duchamp has a “Shock of the new” value of 99. What kind of groundbreaking work did he do?

Playing it with my family of four, we felt it was a bit too unbalanced and hard to gain control, just like War. However, the deck is smaller than a regular card deck, so the game doesn’t go on forever. We played two rounds in about a half hour.

The Art Game retails for $9.95 and is great for people who love the card game War but want it to take much less time and to be exposed to art and artists as they play.

Note: I received a copy of this game for review purposes. 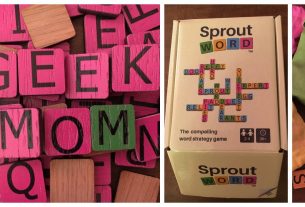