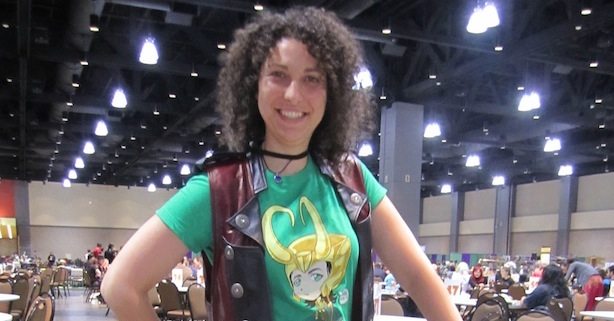 What a bunch of weirdos.

I can’t say I was in a good frame of mind when I went to ConnectiCon last weekend, but I certainly came home in one.

My family and I travel to Connecticut each year to this multi-genre convention of fandom and fun.  I was dragged there by a friend and enjoyed myself so much that I started dragging my own people with me. In the past ten years, I’ve only missed one. This year I took my two teenagers, plus one of my daughter’s friends. We stayed at the family of a friend’s house, camping in their backyard. (I utilized all the tips I suggested in a previous post to go to a con on the cheap.) At this point, the kids and I meet up with over a dozen people each year we attend—and always meet new friends, too.

So why the negative start? I had just spent a stressful week in the “real” world, and had a lot of work to catch up on. Going away for the weekend seemed like just one more item on my to-do list, and I wasn’t in the mood to cosplay, interview celebrities, or participate in discussions. When I walked into the con, I looked around and had a very negative attitude.

Then I realized that I go to these things all the time. I’m a weirdo!

For a split second I was dismayed. Did other people judge me that way? And then the atmosphere of ConnectiCon started seeping in: the relief of expressing something you love, the joy at seeing friends, the happiness at being yourself in an accepting little universe even if only for the weekend, and the fun of sharing it all with my kids. Who the hell cares if people judge me for being a geek! And I certainly will not start doing it to others. After that, the weekend was a blast. So what did my family and I do at ConnectCon? Lots!

The best part is seeing our fellow geeky friends. I had thought one of my best friends in the world (the same person who brought me that first year) couldn’t make it, but then he did! We watched the FMV Contest (Fan Made Videos) together. I try to pick the ones that really match the music with what’s going on. There was a superb one that used a Bjork song…and I didn’t write it down… and I can’t find a list on the website…

My son played Magic for most of the weekend. Although he had a great time, he felt like he had been at a party and only talked with one person. Next year, he said, he’d try to branch out in his activities more.

My daughter and her friend cosplayed on Saturday: Effie Trinket from The Hunger Games, and Chihiro Ogino from Spirited Away.

We danced, danced on Friday, but I let my daughter and her friend dance on their own Saturday (my feet hurt by the evening—old lady is me.) They said it was lots of fun. They wanted to go to Tea Time, but were unable to get in. It’s a popular panel! Yay for tea!

Several of us went to see the 18+ Art Fight. This is where two teams of cartoonists are given random words/phrases from a spinning wheel and have to draw on a huge board. The artists (and words) change every five minutes, while a host chats with the audience, and makes comments and jokes about the art being made. Although the format is well-done, the 18+ excuse only led to frat-house humor. One of my group said he had seen their regular show, and with more random words/phrases, there was more creativity and less penis jokes. After fifteen minutes of the extreme sex humor, we got bored and left…

…to find a spot to see the fireworks! ConnectiCon coincided with the River Festival in Hartford, and Saturday night had a great show (complete with a beautiful full moon.) We decided to go outside the con to see them, but quickly returned after the fireworks were over. We missed the happy vibe of geeks, even for just an hour.

I enjoyed walking around the Artist’s Alley, bought some new comics, and chatted with artists, including this young girl and her proud mom:

I met other geeky families attending:

My daughter bought me an adorable Loki t-shirt. Yay! And I played LOTS of games (I’ll make a separate post about my favorites.) We saw the panel with Janet Varney, the voice actress for Legend of Korra. She was very entertaining, and even got some calls from other actors from the series to answer fan questions.

This weirdo can’t wait till ConnectiCon 2015!

Awesome Free Resource About the Benefits of Comics for Kids

2 thoughts on “ConnectiCon: A Much Needed Break From Reality”