Summer is the best time to take your kids outside for some science fun in the sun. Not every experiment has to be fast-paced or explosive to make an impression, either. On a lazy summer day, you can take the time to watch ice melt in these simple experiments for young children.

Toddlers and preschoolers can learn about light, heat, and forming a hypothesis with these easy experiments. For the youngest scientists, start simple. Place two ice cubes on the sidewalk, one in the shade and one in the sunlight. Ask your toddler, “Which ice cube do you think will melt faster? Why?”

Any little kid who has spent time outside on a sunny day knows that the sunshine is hot, but watching it work its magic on the ice cube gives you the chance to talk about states of matter, the sun, and anything else your kid can think of to ask about. (We are fond of eating popsicles on the front steps while we gaze at the melting ice cubes.)

For an added twist on the experiment, place two ice cubes in the sun again, with one on black paper and one on white. Ask your child again what they predict will happen. My five-year-old was certain the brighter paper would melt the cube faster. As the cube on the black paper melts faster, talk about how dark colors absorb heat. You can even try different colors of paper to see which gets the fastest time.

This is an ice magic trick, and can be done indoors so you don’t have to take the materials outside. For a geeky twist on this one, we used a Wonder Woman cup, and I asked my daughter if she thought the “magic lasso” (the thread) could lift the ice by itself.

You’ve probably done this experiment before as a kid yourself. Lay the thread or string across the ice, and sprinkle salt on top of it. After a few moments, you can lift the cube up with just the string, after the ice has melted and re-frozen on the top. When your child invariably asks how that happened, you can talk about how salt lowers the freezing point of water.

You can check out Cristen’s Playing With Water Phases tips for more fun outside with ice and water, or get the sidewalk chalk and draw the solar system to scale. 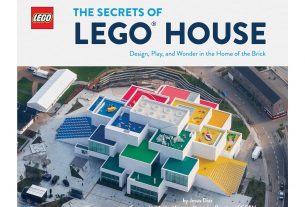 Relearn How to Play by Reading ‘The Secrets of LEGO House’