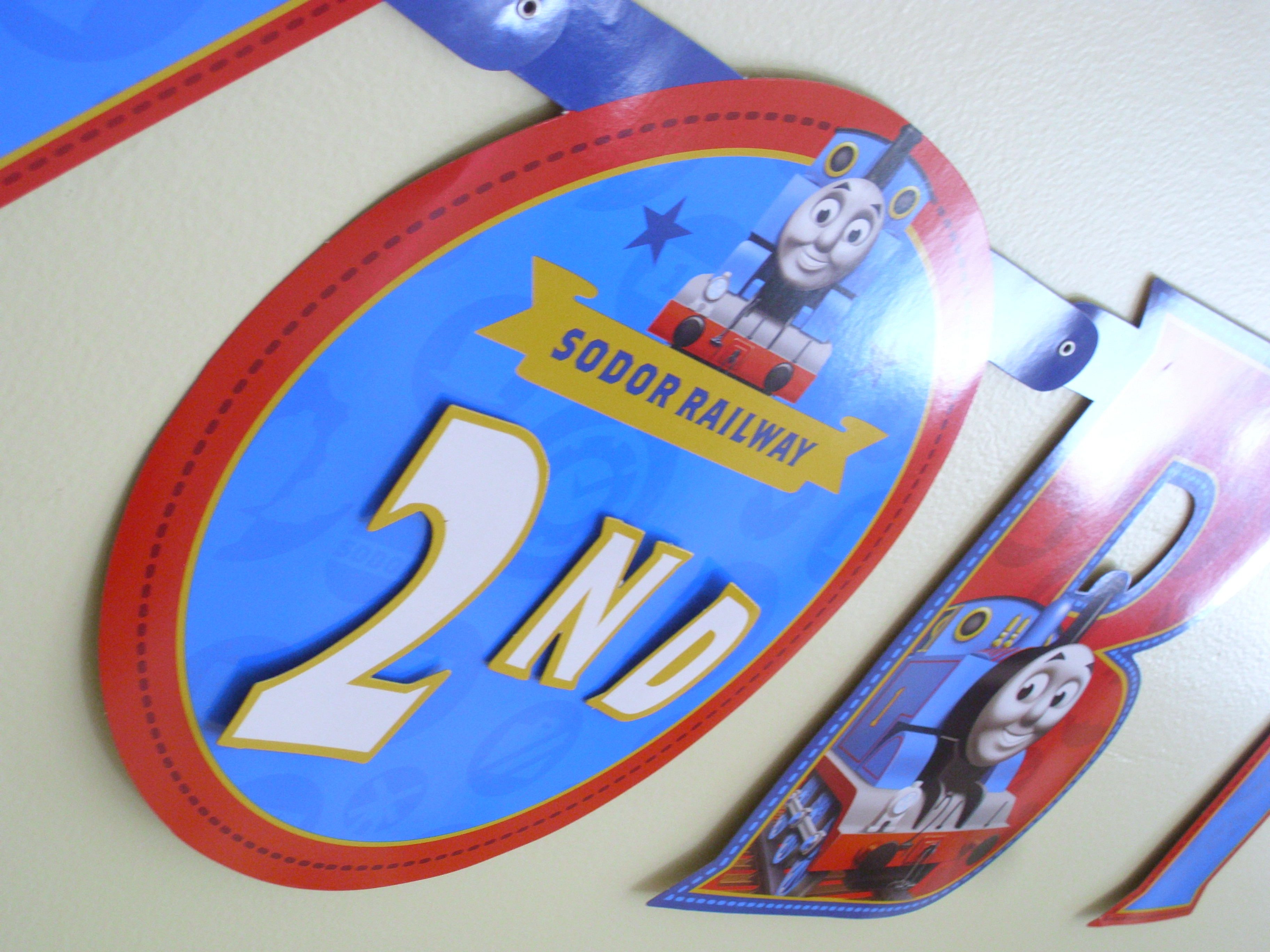 With my eldest son turning five this year, and my youngest having just turned two, we have a decent number of birthday parties under our belts. This weekend was the first time we had a thorougly licensed birthday party though, and it was a little shocking. We opted for Thomas and Friends for my youngest son’s second birthday and didn’t give it a second thought until putting together the decorations last week: Wow that’s a pricey tablecloth.

When we hit the local party shop to pull together our ideas, we got a bit of ticket shock. Somehow we managed to pull ourselves together, away from the $10 balloons, and put together a licensed birthday party that was still over-priced but not too far over budget! Here are some tips on reducing the cost, and stress, of that licensed party. 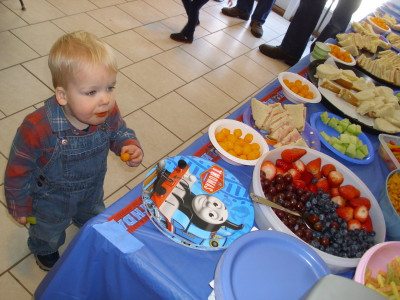 We opted to use a fifty-fifty approach to decorations. We purchased one Thomas tablecloth, and two plain blue dollar store deals. The Thomas tablecloth provided that extra pizazz for the cake and gifts, and my son was sufficiently enthralled by everything on it. We also stole an idea from a friend’s recent Princess Sofia party. Themed plates are only “necessary” for the children attending. Adults can eat from plain dollar store options. Who knew? The limited number of plates added to the decorations, but didn’t add too much to the cost. At $3 for 12, it was still extortion in my opinion, but again, was well loved by the birthday boy. The main splurge of the day was the Happy (insert date here) Birthday banner, which given a little time could probably have been handmade, but for lack of stress and beauty of banner I give it a ten out of ten. For even cheaper decorations we placed several of his toy trains on the table with the platters of food.

My favorite cheap decoration came from a Pinterest find. Yet even though it was my favorite, it seems no one took a picture of it! Using blue painter’s tape, we laid a train track from the front door to the church hall, where the party was being held. Not only did it provide guests an easy route to the party, it provided endless entertainment for the kids who chuffed along it quite happily. And my fear of having to take 100 ft of tape up at the end of the day? Apparently peeling tape up from the carpet in six inch increments is great fun for kids aged four through nine! 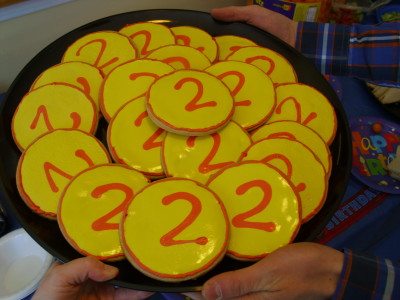 No themed food here. Good old triangle sandwiches and cheese balls for us! For the cake, rather than attempt to pipe icing in the shape of Thomas, we opted for flags and accessories purchased in bulk from Amazon, and added them to simple cupcakes. I also took a leaf out of Bakeat350’s book, literally, and made decorated sugar cookies using the flood and fill technique. Now I know Thomas is the number one engine, but after putting a number two on my son’s first birthday cake (and then fixing it) I had to go with Edward’s number and make color correct #2 cookies. We attempted to cut out the sandwiches using a Train cookie cutter, but it was rather a sad looking train, so we dispensed with that idea very quickly. Other shapes worked quite well, but weren’t in keeping with the theme. 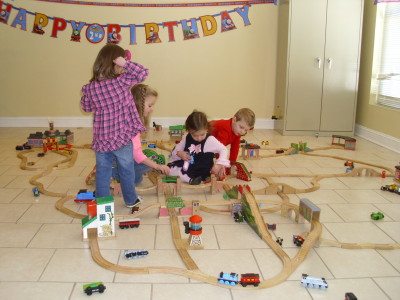 Here perhaps was our biggest win of the licensing game. We inherited quite the collection of wooden track from friends, so rather than splurge on entertainment for our rowdy crowd, my husband and I spent the night before the party setting up our very own Island of Sodor. It was easily 12 by 12 feet, and suffered minimal construction work during the day, even with kids aged between one and nine playing on it for three hours. If you don’t have access to quite this amount of track, but have a tot sufficiently interested in Thomas, it might be a good gift suggestion for the party. Then you can add to the track as guests arrive. Any other Thomas game we had was brought out of the closet and set up around the room. The kids entertained themselves for hours and had an absolutely “chuffing” good time.

A staple at any of our birthday parties is a well stocked coloring table, for this year we had a selection of crayons and coloring pencils, as well as an assortment of Thomas themed stickers and coloring pages. We purchased an enormous pad of stickers and coloring sheets from Sam’s Club and I tore the book apart for individual projects. It was an amazing deal for the quantity and quality we got, not to mention the leftovers that will be getting used up over the next few months. 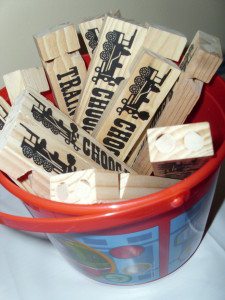 When we decided on this theme months ago, I decided not to do goody bags. Then the week of his birthday came around, and my mother’s guilt chip kicked in. Last year we gave out bags of Chips Ahoy with a sticker on them proclaiming, “We’ll eat you up we love you so!” It was a Maurice Sendak birthday. This year we went for a bucket of train whistles; thank you Amazon Prime and the two day delivery! These were fairly inexpensive on Amazon, but be warned, of the 24 we ordered only 12 actually made a whistling sound. A file and some elbow grease will fix them, but alas not in time for the party. Next year I will definitely be checking out the suggestions provided by my fellow GeekMom, Kelly Knox, for goody bag alternatives.

While a licensed birthday party can bring a substantial amount of sticker shock, it can also bring a great deal of joy. I would certainly choo-choo-choose this theme again. 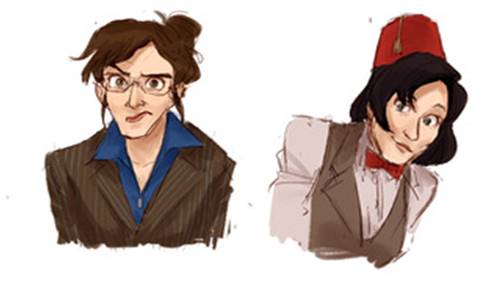 Why Doctor Who Would Never be a Woman

1 thought on “The Cost of Licensing a Birthday Party”