Happy Comic Release Day! Welcome to another installment of GeekMom Comic Book Corner, where we recap our adventures in comics for the week. This week, I learn a bit more about Spider-Man’s relationship with Gwen Stacy, Lisa journeys into Astro City, Sophie is excited about more X-Files comics coming in January, and Corrina looks at a few of DC’s offerings this week, including a battle between He-Man and Superman.

Spider-Man Blue is the story of how Peter Parker and Gwen Stacy became an item. Any fan of Spider-Man pretty much knows how this story is going to end, but if you’re not familiar with the tragedy of Peter and Gwen’s relationship, no spoilers here, Peter spells it out for you early on.

I really enjoyed how writer Jeph Loeb chose to tell this story. Set after the events of Gwen’s death, Peter narrates the story by recording it on Uncle Ben’s old recorder.  In between remembrances of Gwen, however, there’s also plenty of Spidey righting wrongs and fighting villains like the Vulture, Kraven, The Hunter, The Lizard, and Green Goblin in order to offset some of the sadness.

Both the author, Jeph Loeb, and the artist, Tim Sale, did a nice job capturing the emotion of the characters as well as the heart of everything that happens. If I had to pin my favorite part, it would have to be the last scene with Peter and Gwen. Seeing the two of them embrace for the first time was simultaneously heartwarming and heartbreaking. Before reading this story, I had no connection with Gwen and as bad as it sounds, I didn’t truly care that she died because Peter gets Mary Jane in the end. After reading this story, it breaks my heart to know that Peter could have had happiness with Gwen if only the Green Goblin hadn’t interfered.

If you’re looking for a Spider-Man story where you get a nice balance of action and heart, Spider-Man Blue is the story for you. Just remember to pick up a box of tissues for the more tragic moments.

I was hooked on this series from the very first issue with it’s retro travel design, well-paced stories, and a fresh feel to seemingly-classic heroes. Most of all, however, it was the very human look at superhuman beings and the universe they live in: Samaritan’s only escape from never-ending responsibilities is his dreams; Jack-in-the-Box’s worries about his son’s future; Steeljack’s handling of his aging body and feelings of regret.

Come to think of it, Astro City’s 1998 1/2 special, “The Nearness of You,” is the first comic that actually moved me to tears, it was that beautiful and heartbreaking.

The current run of Astro City’s is no exception, and the latest issue, Astro City #4, certainly emphasizes the “human” in superhuman. Told through the eyes of telekinetic Mattie “Sully” Sullivan, who has used her powers in the motion picture industry for years, we learn of a group of ordinary people with extraordinary skills who have opted to use their powers in occupations that don’t involve being a hero or villain: art, music, legal work, etc. When Mattie and the others get taken hostage by a supervillain wanting to tap into their abilities, Mattie is forced to temporarily step into a hero role.

I really feel drawn into this world with every issue. It is so fantastic and out-of-the-ordinary, yet so real and down-to-earth. I always finish an issue feeling I’ve actually visited a real place, took in the sites and conversed with the “locals.” That, to me, is what makes a reading experience fulfilling.

New comic book releases are usually publicised so far in advance of their release (see the publicity for January’s Serenity series) that the it’s rare for us to get a surprise.

That’s why it was such a shock for me when I visited IDW’s January products page on Previews World. Instead of seeing the one X-Files issue whose cover I had been heading over to peruse, I was instead looking at four different X-Files comics all due out in the same month: issue #8 of the ongoing The X-Files Season 10, a “Director’s Cut” of #1 (which will contain all the issue’s variant covers and the comic’s script), The X-Files Conspiracy #1, and The X-Files Conspiracy: Ghostbusters #1. IDW branded this multi-issue launch as “the event of the year!”

The plot of Conspiracy sounds like the most insane piece of fanfiction I’ve ever read, and believe me when I tell you I have read a LOT of X-Files fanfiction. The Lone Gunmen discover “internet files from the future” which will see them investigating the Ghostbusters, the Ninja Turtles, Transformers, and The Crow.

Yes, there is now an official X-Files/Transformers crossover happening—suddenly that fanfic I’ve been writing where Scully becomes a vampire sounds infinitely plausible. The numbering is a little unclear but The X-Files Conspiracy: Ghostbusters, scheduled to be released two weeks later, appears to be the second part of this story and sees the Gunmen investigating the Ghostbusters, their first lead in this crazy ongoing plot.

I have no idea what this crossover event will entail but I’m excited for it. I always loved the sillier episodes of The X-Files and have read some pretty bizarre crossover fiction over the years (X-Files/Doctor Horrible anyone?) so to have some official craziness is fine by me, providing it stays nicely away from my beloved canon.

I suppose I’m going to have to go and watch The Crow now, aren’t I?

Speaking of odd crossovers, first up for me is DC Universe versus Masters of the Universe AKA He-Man and friends versus the Justice League, plotted by Keith Giffen, scripted by Tony Bedard, and drawn by Dexter Soy.

This was my favorite comic issue this week and I’m not even a big He-Man fan. Prince Adam and crew have been banished to our Earth, where he has a reunion with his mother, and John Constantine helps them seek out the Justice League. I know! John Constantine, Batman, Superman, and He-Man all in the same issue. Surprisingly, it works, with Skeletor as the main villain who, in true villain fashion, mind controls the League and sets in motion a fight between Adam and Superman.

This felt like an old-school Multiple Earths crossover from DC days gone by. I must seek out issue #1.

Meanwhile, over in the regular DC Universe, the Crime Syndicate is still in control of Earth. JL #24 by Geoff Johns and Ivan Reis tells the origin of the evil Superman, Ultraman. It’s pretty much what you’d guess it would be, with warped versions of Kryptonian and Earth parents. The story picks up a bit when Ultraman attacks the Daily Planet and yells at Jimmy for not being evil, and Lois and Jimmy try to defend themselves. They’re saved by someone wearing a cape and flying but not who you’d guess in a nice splash panel by Reis. But, hint, the rescuer is one of Johns’ favorites.

Justice League Dark by J.M. DeMatteis and Mikel Janin checks in with John Constantine, seemingly the lone survivor of the magical version of the League. The wisecracking, cynical Constantine hasn’t ever been a favorite, but it’s an interesting story as he tries to come to grips with heroism and his place in it. The art is very nice and I appreciate the effort to keep the sexualization to a minimum. Zatanna looks gorgeous without being over-the-top. This book kicks off a magical crossover called “Blight” that will last for 18 chapters. Not sure I’m sold on that but DeMatteis, one of my favorite writers from years back, appears to be in fine form with this beginning. 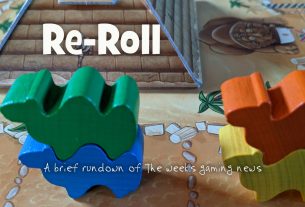 Create Your Own Mario Masterpiece With ‘Super Mario Maker’