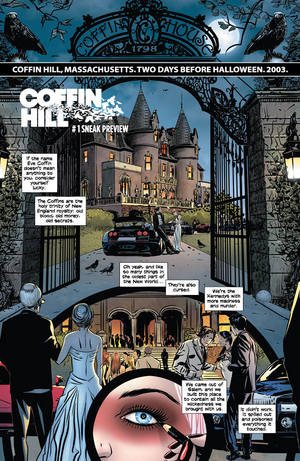 Corrina Lawson takes a look at two new mature books from Vertigo and details why Superman/Wonder Woman doesn’t quite work, Lisa Tate reviews The Shadow Now, and Kelly Knox reads the Star Wars book that reveals what happened in the time between A New Hope and The Empire Strikes Back.

After reading this first issue, I felt much like my first encounter with Rachel Rising by Terry Moore: I’m not sure exactly what’s going on but I want more.

If the name Eve Coffin doesn’t mean anything to you, consider yourself lucky. The Coffins are the holy trinity of New England royalty: old blood, old money, old secrets. Oh yeah, and like so many things in the oldest part of the New World… They’re also cursed.

Thus reads the introduction into the world of Eve Coffin. Had the comic started with this page, it might have proven a little less confusing but I’m glad it didn’t because the narrative jumps make this book a more satisfying re-read than a traditional linear narrative.

The story weaves together Eve Coffin’s time as a police officer, her teenage rebellion and foray into dark witchcraft because of her messed up family, and the mystery surrounding a supposedly captured serial killer.

The art by Miranda is perfect–spooky where it needs to be during supernatural happenings and crisp and clear during events in the real world. There’s a terrific fragmented splash page with Eve close to death that tosses out many clues to her past and present.

There are so many story questions that I can’t wait for the next issue.

“Seven months from the top of the food chain to endangered species.”

That’s the premise of this series, which begins in a very changed Manhattan as two teenagers from the remnants of humanity hunt a zebra in the now-forested top of one of New York City’s office buildings. The settlement in Manhattan may be some of the last humans alive but that doesn’t mean they’re the only intelligent beings left on Earth. People now share the world with hostile monstrous creatures that are half-legend and half-mutation. The story centers on a search party sent to find out what happened to the radio outpost in upstate New York.

The premise is very good, the art, particularly the view of changed Manhattan is eye-popping but I’m not quite attached to any of the characters yet. There is a teenage female hunter, perhaps in the vein of Katniss, though this girl is far more likely to run to trouble than run away from it. We’ll see how long she and the rest of her people survive.

The pairing that’s been teased for months, the that one artist Tony Daniel said DC wanted to market to women to attract the Twilight audience,  is finally here.

The best that I can say is it’s not wholly terrible.

The main failing isn’t from the artist or the writer. It’s the concept.

In order to have a pairing with chemistry, there needs to be some contrast. That’s true even with a platonic team-up. That’s why Wolverine and Kitty Pryde can be so much fun, why Valkyrie and Misty Knight are fascinating together in The Fearless Defenders, and why the saving grace of the meandering World’s Finest series is the friendship between Huntress and Power Girl.

That’s why Batman/Superman is so much fun, to the point where DC’s Wildstorm Universe re-created their friendship into a romance with Apollo and Midnighter.

Superman/Wonder Woman or Clark/Diana? Just blah. Soule tries (perhaps too hard) to make the pairing interesting but it reads flat. Clark shows up for a date  with Diana with a flower from his native Krypton. Then they disagree about keeping the relationship private. Though I had to wonder why Clark, if he wants the relationship private, is standing on Diana’s balcony, in civilian clothes, kissing her. One would think the DC Universe has the same British tabloids as we do….

For her part, Diana brings out a sword and waves it at Clark, which seems to startle him, and says he’s powerful but she can teach him how to fight. But his expression is more startled than “wow, that’s hot.”

The best part of the book is their danger date to investigate an ocean whirlpool. Wonder Woman takes on saving a plane in distress while Clark investigates the whirlpool. He’s good with weather, he says more than once. I guess that’s to contrast Diana, who’s better at punching things? A very well-known villain turns out to be at the heart of the whirlpool. I admit, I want to see Wonder Woman fight that villain.

But I suspect she won’t win in issue #2, especially since Superman is already down. Though, in a strange way, Wonder Woman comes across best in the issue, as she’s confident and straightforward and Clark/Superman is tentative and unsure, even in his conversation with Cat Grant.

For a far better romantic scene with Clark and someone else not Lois Lane, check out Batman Beyond Universe, which manages to take a concept I hate (Lois is dead) and make it work.

One of the comics I have been reading lately as a guilty “mom” pleasure has been the new, dark, sultry and fast-paced adventures of Lamont Cranston in Dynamite Comic’s The Shadow series.

The series was revamped last year and penned by the ultra-violent madman Garth Ennis. Although a little of Ennis sometimes goes a long way for me, The Shadow is one of his best works, and the comic has since been consistently one of my favorites through writer and artist changes, including Matt Wagner and Chris Roberson.

This month is a great time to get into the series, with the release of the six-parter The Shadow Now, by David Liss with art by Colton Worley. In this series, readers will see Cranston go through a sort of rebirth in modern-day New York after undergoing a “rejuvenation” period for decades. The setting may be new, but the stories should be as sharp as ever.

I used to check out old vinyl recordings of the original radio dramas from my school library, so reading these not only brought back happy memories, but brought a new, edgier side to a favorite characters. I keep hearing the “on again/off again rumors” of director Sam Raimi’s possible Shadow movie adaptation (a remedy for the horrible 1994 big screen effort, I hope). If he does, I hope Mr. Raimi contacts me for Cranston’s casting suggestions.

Dark Horse Comics’ ongoing Star Wars book continues to do a bang-up job of showing fans what happened to our intrepid heroes (and villains) in the time between A New Hope and The Empire Strikes Back. The series often delves into the emotions and complexities of familiar characters, and issue #10 gives us a peek at what is going on in the mind of X-wing pilot Wedge Antilles.

Wedge Antilles has harbored a grudge against the Empire since losing someone important to him, and Star Wars #10 stops for a breather to give him a chance to open up about it to Luke Skywalker. Not only does Wedge foreshadow the formation of the Rogue Squadron, writer Brian Wood also includes a small shout-out to a character from Star Wars Tales who had a huge impact on Wedge’s life. Brian Wood continues to show his love of Star Wars by sharing small details that true fans can appreciate, without alienating anyone only casually familiar with the universe.

I love the interior art by Carlos D’Anda, which leaps off the page as always, and as a fan of Hugh Fleming’s Star Wars portraits I’m thrilled to see him on the covers. While the overall story doesn’t advance in this issue, it’s obvious that we’re soon about to see a lot of action in a galaxy far, far away.

Exclusive ‘Scooby-Doo: Where Are You?’ Preview

Book Discounts For Day Against DRM