We started the Countdown to the premiere of Marvel’s Agents of S.H.I.E.L.D. on September 1st and have spent the month talking about all things S.H.I.E.L.D.-related, with the past week focused on profiles of the agents on the show, including speculation on how Coulson survived his supposed death in The Avengers.

Tomorrow, we can finally talk about the show itself, which premieres at 8 p.m. EST on ABC.

To recap, check out the posts on the origins of S.H.I.E.L.D.; recommended reads; a look at the spy agency’s creators, Jack “King” Kirby and Stan Lee,; the evolution of Nick Fury’s role in the Marvel Universe; S.H.I.E.L.D.’s enemy Hydra and its tech; tech created for S.H.I.E.L.D., including Life Model Decoys; various agents from the comics, including Maria Hill, Sharon Carter, Jimmy Woo, and Valentina Allegra De Fontaine; a look at the Howling Commandos from World War II; and the research facility that’s seemingly destroyed at the beginning of The Avengers, Project Pegasus.

And read our review of the pilot, which has only slight spoilers. 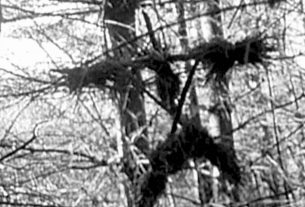 From Witches to Watering Holes: A Spooky Woods Quiz