Last year, my son was two-pushing-three years old when we took him to Drayton Manor Theme Park in the heart of England. We primarily went to experience Thomas Land, a Thomas the Tank Engine-themed section of the park geared for younger visitors. My son rode his first roller coaster there. This year, on our return trip, Thomas Land was just one of many things he wanted to do. 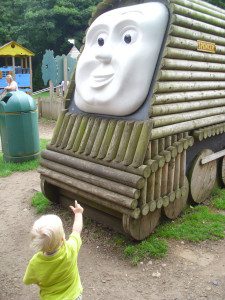 At almost four years old, he was ready to join the big kids. His parents however, wanted to linger in the early childhood years and so we headed straight for Thomas Land. Fortunately for us, we do have an 18 month old Thomas junkie, who was merely two months old last year and slept through the entire experience. My youngest felt no need to go on the rides—he’s too short anyway—but he did enjoy watching his brother and waving at everyone. He was over the moon at everything he saw, and absolutely elated by the character interaction. But it was the playground that captured his heart. His favored train is Spencer, the fastest train on Sodor, and the playground is Spencer themed. While his brother ran willy nilly from slide, to tunnel, to slide, little brother was more than content to stand and chat with Spencer. This is a great park for kids of all ages. There is a fence all the way around and only one entrance. If you have a trustworthy child it is easy enough to sit at one of the picnic tables and watch; if you don’t, there is plenty of space to follow them around, as we did!

Thomas Land also boasts an indoor play area, where a special timer limits children who might want to stay all day. The advantages of the indoor play area are many, but include big leather couches, on which many parents can be seen taking a quick nap! Without an infant to think about this year, we discovered more of the Thomas themed sections than we had last year. Farmer McColl’s farm contains all kinds of animals, a mini museum, and its own ride. The Tractor ride was great for my son’s burgeoning independence. Much like Dodgems, the children each have control of a Tractor and a train driver is on hand to help guide them around the track. It’s a long wait, as they only have four tractors running at any one time, but all the children seemed to appreciate it once it was their turn. The animals were surprising to us; the North American raccoon, and North American beaver are critters that we find in our backyard so it was odd seeing them in a zoo setting. A quick walk through the zoo proper, and a ride on the mid size train, and my youngest son was done for the day.

While my eldest dreamed of the roller coasters in another part of the park, we did manage to get in two rides at Thomas Land. We rode Rocking Bulstrode for the second year, a tug boat that goes from side to side and turns 360 degrees. There was also a new ride at Thomas Land that piqued his interest, so while Grandad pushed around a napping little brother, my husband and I took a ride with our eldest on Winston’s Whistle Stop Tour. Based on a Wickham 4B Trolley Car, Winston is Sir Topham Hatt’s track inspection vehicle, a car on the rails. It is basically a monorail that rides high and takes visitors, four at a time, on a guided tour above and around Thomas Land. It’s a slow moving ride; don’t partake if you dislike heights. With a thirty-minute wait that I thought would be the end of my son’s patience, it was actually well worth it. 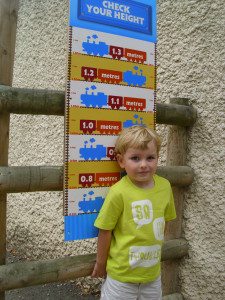 As adults we knew that the rides in Thomas Land were well-suited to my almost four-year-old, but that’s not how a kid’s brain works. He took note of several rides for “big kids” as we walked by on our way to Sodor. When he was—very quickly— done with trains, he knew exactly where he wanted to go: the water rides. The biggest water ride there, Stormforce 10, has a 180-degree rotating platform that sends riders down a nine meter drop–backwards! It also has a height requirement that didn’t match up to my son’s excitement; he had to settle for watching the ride in wonder. He was tall enough to ride on Splash Canyon, and did so several times. I found some disappointment in this long time favorite of mine. Splash-Tire rides are not the same as when I was a youngling. There are now waterfalls and water guns that ensure you get wet; back in the day it was all a matter of chance. On a cold day this was not so pleasant, but to a three-year-old in a raincoat it was amazing. Remote control cars and boats finally diverted him from the water rides. This is a British theme park so expect some rain, and unlike at Florida theme parks, you will not dry off as quickly when the storm passes! As my son pointed out, if we’re already wet from the rain, why not ride Splash Canyon again. Now who could argue with that?

I love all the technical data about park rides. The Drayton Manor website provided me with these statistics:

I could go on, but their website provides all of this technical information. In fact Drayton Manor offers an educational experience as well as an entertaining one. British schools can book educational packages that enable students to get their ride fix, but also learn a little. The park calls itself “a giant physics experiment, a diverse business case study, an impressive IT lab, and an exciting animal encounter.” My kind of park!

Disney Parks present Sneak Peek for Guardians of the Galaxy

Snow Geeks: Wired on the Mountain