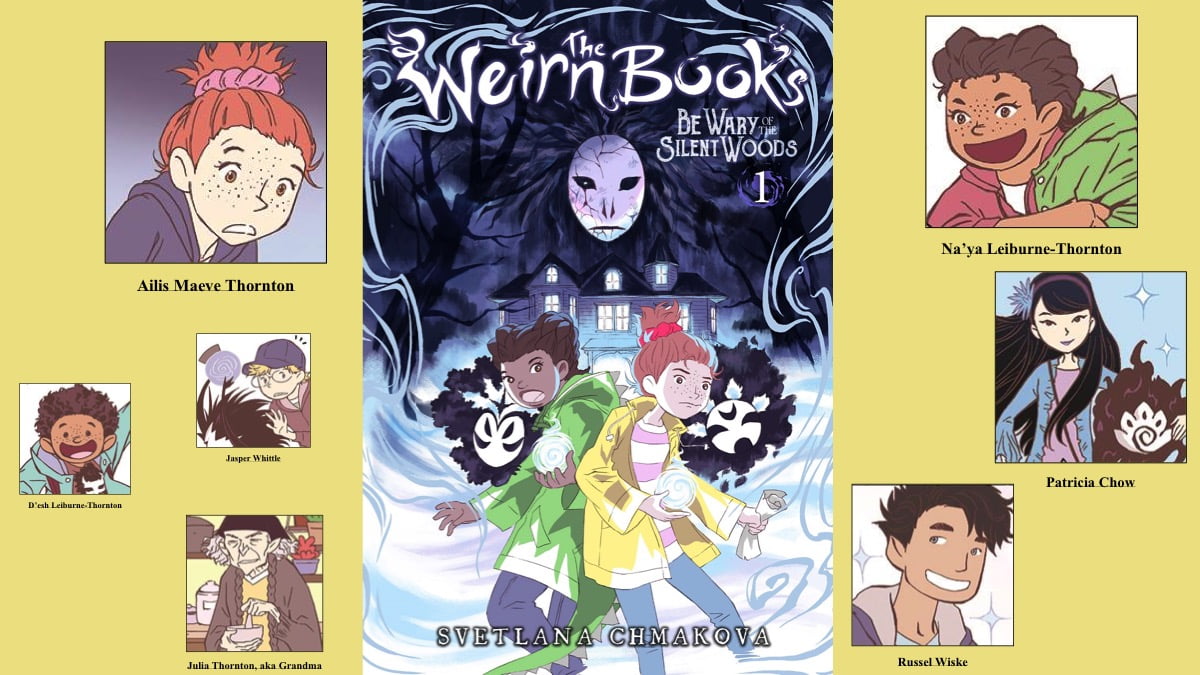 The Weirn Books #1 Be Wary of the Silent Woods

Woo-hoo! After a decade, one of my favorite graphic novelists is back inside a beloved fantasy world with The Weirn Books series. Svetlana Chmakova wrote the Nightschool series back in 2009. It remains one of my kids most highly-rated books. In our modern world, when the regular schools close up for the day, the nightschool begins, bringing children of werewolves, vampires, demons, and weirns together (along with other random magical folks) to learn math, reading, and opening portals to other dimensions for example. That first series was YA while The Weirn Books are middle-grade and packed with action and humor.

Be Wary of the Silent Woods has Ailis and Na’ya as cousins in a small town. Although the books are from the POV of things that go bump in the night, the girls’ thoughts mirror those for humans in middle school. Ailis has a crush on her next-door neighbor, who also happens to be a werewolf. Ailis and Na’ya’s main concern is how to not be labeled losers in nightschool. Ailis lives with her grandmother, a cranky but lovable old lady who runs a magic shop. As in real magic.

They are weirns, a unique type of witch that has a visible magical aura called an Astral. While the speaking characters in the book lead the story, their Astrals are characters as well, pet-like creatures that stay close (usually touching) their weirn. They are lovable but also mischievous. In contrast to the pastel coloring of the rest of the book, the Astrals are stark black and white, making them stand out in any scene, swirling around their weirn (unless they are stealing cookies.) They are one of my favorite aspects of The Weirn Books.

Ailis and Na’ya have to take Na’ya’s little brother to daycare before they get to nightschool. The trio take a short cut through the Silent Woods which happens to have a scary abandoned mansion in the middle of it. On one of their trips, the mansion has lights on and a strange creature scares them. Coincidentally, their nightschool nemesis, a beautiful girl named Patricia starts acting nice to the cousins. Later, they find an old journal in grandma’s attic that propels them on solving the mystery of the Silent Woods. The action ramps up when Na’ya little brother goes missing. Adventure ensues!

Chmakova’s art style has altered in the decade since the Nightschool series. The characters in The Weirn Books are rounded with softer features, similar to her other middle-grade series Awkward. Grandma is wonderfully drawn so you can hear her grumpy voice. The art matches the tone which is significantly less intense than the first series in this world.

The author’s talent for creating distinct and diverse characters shines through The Weirn Books: Be Wary of the Silent Woods. Although Na’ya is biracial, and Ailis has no parents in the picture, the girls share a grandmother and are best friends. Despite taking place in a small New England town, we see all kinds of people. Thank you. All the characters have complex personalities that come through with little asides, quick facial reactions, and strong dialogue. I adore the setting of The Weirn Books and was thrilled to be back in that world. How can I get my own Astral?

For more about The Weirn Books, listen to the author interview on Books On Tap.

Or watch the book trailer: