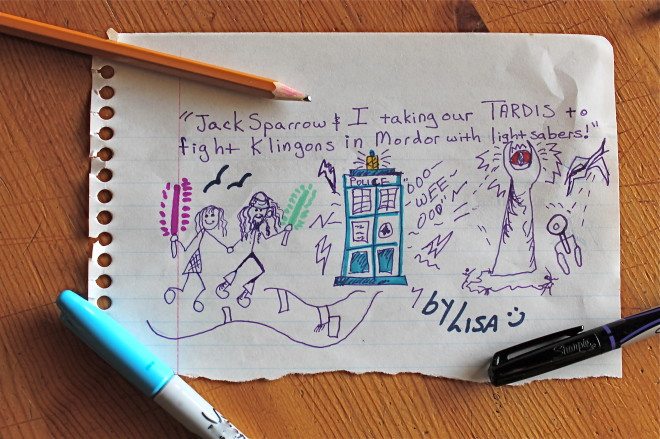 Doodling. Everyone has done it at least once.

I doodle constantly. I scribble cobwebs and steampunk tentacles on the edge of cocktail napkins. I draw floating feathers and concentric Burton curls on the borders of my notebooks when a phone interviewee gets too chatty. I’ve graced the note cards at Five Guys Burgers with a TARDIS and killer zombie bunnies, and I continually fight the urge to take a Sharpie to the toe of my Chucks.

Unlike painstakingly detailed paintings, or over-worked digital art, the doodle is drawing at its purist form; straight from the head to the tip of the fingers to the page. Plus, anyone can do it.

No matter how elaborate or simple, big or small, a doodle is a great equalizer in the world of illustration. Set something to write with and something to write on in front of anyone and, given enough time, most are going to jot something down; be it random lines, decorative ways of dressing up their own or someone else’s name, random curly borders on the edge, happy faces, or X-Wings.

According to professional graphologist (AKA handwriting analyst) Ruth Rostron’s essay on doodling, from the National Doodle Day site: doodling relieves boredom, eases stress and frustrations, and acts as a “safety valve that allows pressure to be dispelled in a playful and creative way.”

Doodling has even been put to good use in nationwide charitable events in both the United States and United Kingdom. The UK’s National Doodle Day has helped raise more than £250,000 for people with epilepsy in its 10 years of existence. Held in early spring, the event offers doodle contests for all ages as well as auctions featuring works of celebrity “artists.” Similarly, the Neurofibromatosis Network collects celebrity doodles year-round for its annual Doodle 4 NF event each May.

Not only have both of these events been successful fundraisers for their causes, they’ve showcased hidden talents of many actors, musicians, authors, and comedians, as well as the not-so-hidden abilities of both amateur and professional artists. Some of these celebrity doodlers have included Sir Ian McKellen, Matt Lucas, James Nesbitt, and Jeremy Bulloch for 2013’s National Doodle Day. John Barrowman, Nathan Fillion, Tom Kane, Melissa Rauch, Brent Spiner, Burt Ward, and Stan Lee have already contributed their doodles for 2014’s Doodle 4 NF. Some of these illustrations are rather impressive, and others, well, are a great way for others to feel secure in their own artistic ability.

As far as what we doodle, Rostron indicated these seemingly aimless images could act as “fragments of a map” to whatever is on one’s mind.

“When you are on automatic pilot and only half attending to what you are doing, you may find yourself thinking of something that has been at the back of your mind. Underlying preoccupations surface and, before you know it, take shape as doodles,” she writes. “Doodling maps the wandering of your mind as you plan a new venture, worry about money, or dream of a lover or holiday. At an unconscious level this seemingly aimless pastime may actually be helping people sort out their problems.”

Different personality types may doodle in different styles. Emotional types like rounded, fluffier shapes like clouds, hearts, happy faces or flowers. Practical people draw images with straight lines or flat surfaces. Determined people draw more “pointy” images like arrows, zigzags, planes, or mountains. No matter the subject, Roston said everything in a doodle relates in some way to the person who has drawn it.

Whether for charity, stress relief, or just an outlet for artistic silliness; doodling is not only something I do myself, but encourage my own children to do as well. I’ve had to stuff many a greasy paper restaurant place mat bearing crayon masterpieces in my purse as proof of this. I’ve looked back on some of my quickly penned images and learned quite a bit about myself. This is not always a good thing, I’ve discovered, but always insightful.

I encourage it in you as well. That is, if you aren’t already doing it, and I have a pretty good feeling many of you are.

To see some celebrity doodles or to learn more about charitable doodling events, visit nationaldoodleday.org.uk or doodle4nf.org.

2 thoughts on “A Few Jottings About Doodles”