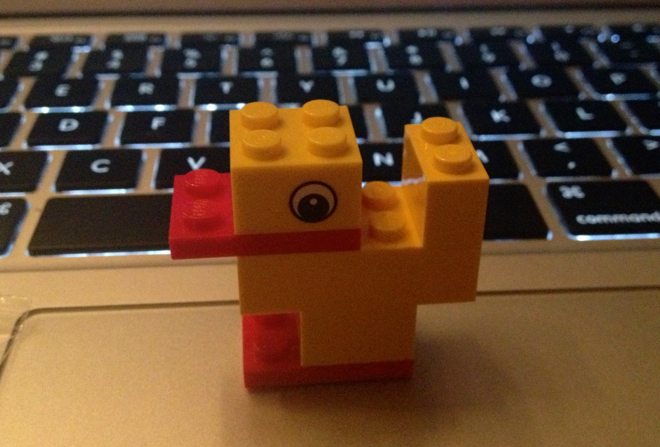 I recently attended IDC 2013: the Interaction Design and Children conference in New York City, presented by The New School and Sesame Workshop. This conference is designed to bring together researchers, educators, and designers who are investigating in meaningful and innovative ways to engage kids with technology. I work on the commercial side of the industry, so I was fascinated to get a deeper dive into what’s happening in the academic community. Here’s a sampling of some of the interesting things I encountered.

LightUp showed one of of the best uses of augmented reality I’ve seen for kids. Their snap-together circuits are reminiscent of Little Bits and Snap Circuits, but go one step further with the augmented reality app that can show the flow of electricity in a working circuit and can help troubleshoot a nonworking circuit. Their recent Kickstarter campaign well exceeded funding, so we can expect to see these moving forward.

Speaking of circuits, Blockuits is a product concept designed to introduce circuits to the toddler set. These plush building blocks stack together to model circuitry concepts, as kids make the blocks light up, vibrate, and make sound. I can imagine these being a hit in preschools.

In other news for young kids, Louise Flannery of Tufts University let us know that Scratch Jr. is in the works! This is in partnership with Trufts and the MIT Media Lab, making Scratch accesible to kids in Kindergarten through 3rd Grade. Woohoo!

David Sengeh of the MIT Media Lab captivated the auditorium with his work. With all of the amputees he saw from the war in Sierra Leone, he saw a need for a way to easily create customized prosthetics. He uses 3D printing to create the customized sockets for multi-material prothestics. He extended that maker/problem-solving sensibility to the children of Sierra Leone, with Innovate Salone, where thousands of kids submit ideas for projects that will benefit their community, and they select finalists to help realize their projects. As Sengeh said, “Don’t solve problems for kids, give them tools to solve problems themselves.”

Dave Menkin of the Center for Digital Music at the Queen Mary University of London showed remarkable music technology for kids with complex needs. These MoosikMasheens used the most simple iPad app interface to activate modified instruments, providing socializing and therapeutic benefits like self-confidence and peer socialization for kids with severe physical or cognitive impairment.

The work of Kanjun Qui of the MIT Media Lab will especially delight my fellow GeekMoms. She and her colleagues are attracting girls to STEM with e-textile workshops. Kids sew together conductive textiles using conductive thread and program their creations with a Lilypad microcontroller. Finding that the text-only interface was turning off some of the kids, they created a Modkit, inspired by Scratch, built on Arduino. Qui will be publishing her curriculum as a book, Sew Electric, which I’ll be anxiously awaiting.

Some concepts had tech razzle-dazzle but weren’t yet implemented in a way that’s going to hook kids. Bridging Books are a book and app hybrid, where when you turn the page on the physical book, it turns the page of the virtual book as well. Illustrations extend from the printed page to the virtual page. In its current prototype iteration, it suffers the same problem as many books brought to electronic devices—why? There’s no interactivity or illustration purpose shown that makes the sum better than the parts. That’s not to say the potential for innovation isn’t there; it’s just not yet realized.

My favorite IDC moment was when everyone in the room was handed a packet of 6 Lego bricks, and we were given 45 seconds to build a duck. I finished my duck handily in the 45-second window, certain that I had built it “correctly.” Of course, I soon realized that being right or wrong wasn’t the point. Everyone immediately around me built their duck differently. With only six bricks, I was amazed at the variations. It was a terrific exercise in creativity, and an interactive way to announce that IDC 2014 will be taking place in Denmark, in cooperation with The Lego Foundations. That’s going to be a good one.

You can read much more about IDC2013 on the conference website. And I encourage you to think of work like this whenever anyone is dismissive of tech for kids.