Back in 1978-1979, Douglas Adams was a Script Editor for Doctor Who. One of the scripts that he wrote, Shada, was never completed due to a labor strike and was left unfinished until now. Gareth Roberts, who has written scripts for the current Doctor Who series as well as spin-off The Sarah Jane Adventures, has taken what Adams started and finished it in this new novel.

Doctor Who: Shada focuses on the problems caused by The Doctor’s old friend, Professor Chronotis, a fellow Time Lord who has retired to Cambridge University. He plans to live a quiet, unremarkable life, but he’s made a little mistake. He has a copy of The Worshipful and Ancient Law of Gallifrey and he’s carelessly given it to a grad student who’s using it to impress girls.

This very dangerous book cannot be left just hanging out on coffee tables at the university. If it were to fall into the wrong hands, say those of Time Lord Skagra, there could be trouble. Skagra heads to Earth to find the book and pursue plans of world domination. The Doctor heads to Earth to stop him.

The whole story is a wonderful Doctor Who adventure that takes place in 1979 with the company of Romana and good old K-9. It would have been filmed with Tom Baker, the 4th incarnation of The Doctor, and it’s so well done that I kept seeing him in my head as I read. Roberts also does a great job of maintaining Douglas Adams’ voice throughout the story, with his trademark satire and humor firmly in place.

Fans of Doctor Who, particularly those who loved the Tom Baker years, will enjoy this little trip back into that world. Doctor Who: Shada is now available in hardcover for $26.95. 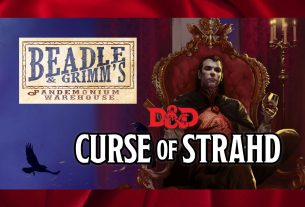 GeekDad: Return to Ravenloft With the ‘Curse of Strahd’ Legendary Edition from Beadle & Grimm’s