Relying on seductive art to draw in your audience is akin to a comedian swearing. It doesn’t take skill to get a reaction.

There have been several recent posts GeekMom and elsewhere about the sexualization of women in comics. Although that’s nothing new, female geeks are finally getting fed up- realizing that being loyal and vocal fans does not grant any respect in the industry.

The discussions on the internet got me thinking about a conversation I had last summer with an artist friend of mine. We were on our way back from ConnectiCon where he had worked with his art and enjoyed chatting with other artists. He excitedly told me about a woman next to him who showed him her “boobie pictures.” Her out-front display was cartoon cats, but she showed him her Adults Only folder with mostly women in sexy poses with big breasts. She encouraged him to display his own “boobie pictures” because they’re fun to draw and sell really well. She said both women and men like pictures of sexy, naked women.

He then waxed poetically about the female figure in fine art, explaining to me how the female form is universally recognized as most beautiful. He talked about slope, curve, and roundness, about masters in the art world, and famous paintings and sculptures. He has a degree in Fine Art and I had no reason to doubt him.

The following day I departed to teach at a teen music camp up in the Adirondacks. The conversation with my friend would not leave me, and I realized I disagreed. However, I’m a musician, what do I know about art? But as the week progressed, I couldn’t let it go.

At a break time by the beach, I informed a fellow counselor about the whole thing. I explained that I don’t find the female form to be any more beautiful than the male form, in fact, I think men are MORE beautiful than women. Why? Because I’m freakin’ attracted to them- duh! And if the masters of the art world, and the majority of art teachers are straight men, then they are going to believe that women are more beautiful because they are attracted to them. Isn’t that obvious? Why should art have all these depictions of naked women? I shouted loudly, “I want more naked men!”

My counselor friend chuckled softly, and slightly uncomfortably. Perhaps this was because we were currently next to cavorting teens of both sexes in swimwear. Did I mention this was a Catholic music camp?

Anyway, comics are just the latest incarnation of the oldest way to show a story (music is the oldest way to tell a story.) I appreciate art with an uneducated eye. This does not devalue my opinion in any way. I know this because the value of an uneducated musician’s opinion is very worthy to me when I write my own music. If someone doesn’t like it, I don’t care how many degrees they have.

Comics are obviously marketed towards men. The covers are to attract the twelve year-old, straight boy’s eye. Do men purchase because of hyper-sexed women and powerful men bursting out of the pages? I know I purchase despite the covers, hoping there’s a good story inside, and wondering why a woman fighter would ever have that much skin exposed. Is it eye-catching? Of course. So is this:

Would I purchase a novel solely on this cover? My stereotypes tell me this would be called Fields of Passion. And unless the hot guy on the cover is going to come out of the book and snuggle with me while I’m reading, I wouldn’t buy it. I like plot (call me wacky) and many books geared towards women, the ones with hot men on the cover, are sorely lacking in it. That is why I pick up stories with a scantily dressed woman on the cover calling down lightning.

If I told a heterosexual man that Fields of Passion was a gripping tale he really would enjoy, would he try it out? Would he hide the book from friends? Do women hide the “boobie pictures” spilled on our favorite comics? It is taught in library school that girls will read a book with a boy or girl on the cover. Boys are rarely drawn to books with a girl on the cover.

So men only care about stories involving women if they are seducing them?

The picture above is a sexy picture I found while perusing deviantart (some people watch YouTube videos, I browse artwork.) The Greeks believed the male form was the most perfect (and this is not because Greeks were fine with being gay; homosexual practices depended on the city-state) and women were rarely depicted in the nude until late in the age. Why don’t we acknowledge that any human body can be made beautiful by a skilled artist?

But you know, I don’t need a skin shot to catch my eye. All you need is a talented artist who can capture a moment, and I want to know more.

Do I really want more naked men in graphic novels? If the scene requires it- I’m more than happy to drink in the sight. For that matter, I don’t mind looking at a beautifully drawn naked woman. Sex is part of life, a part of stories- a very exciting part! But if it doesn’t follow the plot, then no thank you.

Are the top graphic artists so talentless that they can’t create eye-catching, beautiful art without sex attached- women and sex to be specific?

I am not an artist, but I love art. I love beauty. I love stories.

Don’t give me swear words. 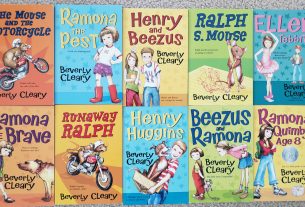 I Truly Came to Appreciate Beverly Cleary As a Parent