I’ve been a Sherlock Holmes geek since I first discovered Hound of the Baskervilles in the stacks of my junior high school library. After finishing, I eagerly devoured the whole Canon, up to and including the two-volume annotated set by W.S. Baring-Gould. I also tried to regale my junior high circle of friends with tales of Holmes and Watson. In retrospect, this was likely the first neon sign that I was a confirmed geek and not quite like my friends.

Even today, there are few things that make me geek out more than Sherlock Holmes.

At one point, I not only had the stories themselves memorized, I had the notes in the Baring-Gould volumes memorized. Are there two Mrs. Watsons? Was Watson wounded in the shoulder or the leg? Just what really happened to Holmes on his Great Hiatus? What did Holmes mean when he said his brother Mycroft sometimes ‘was the British government?’ Was Holmes really in love with Irene Adler or simply appreciative or having been bested? And just how did that dancing men code work anyway?

And it’s not just Holmes I love. It’s Watson. I adore Watson. I love that he’s so stalwart, that he puts up with Holmes not because he likes being ridiculed but because he sees the inner Holmes, the one who is concerned about justice but is just this close to giving into his demons, particularly drug abuse. Watson is the kind of friend we’d all want to have. Even Holmes, despite his snide comments, knows that.

My gold standard for a good Sherlock Holmes story has always started with a great Watson. Through the years, I’ve read a ton of Holmes continuations, homages, imitators, and adaptations of the characters of varying quality. I want so much to love Murder by Decree. It has Christopher Plummer as Holmes and James Mason as Watson. It should be perfect, especially considering the villain is Jack the Ripper. Alas, Mason’s Watson is a buffoon.

I enjoyed Sherlock Holmes movie last year starring Robert Downey Jr. and Jude Law. It had a great Watson, which I loved, but Downey–much as I adore him–wasn’t playing Holmes but some other character.

So when I heard Steven Moffat–the man behind my favorite season of Dr. Who–would be adapting Holmes for the modern day, I was extremely skeptical despite the source. Just because he can write the Doctor, it doesn’t mean he could somehow put Holmes & Watson in the modern day and make it good.

But he and creative partner Mark Gatiss succeeded in making Sherlock not just good, but great.

In the original stories, Watson is a wounded veteran of the Afghanistan wars. There’s more than a hint  that Watson craves the excitement of the chase as much as Holmes, evident in Watson’s eagerness to jump in when the game is afoot.

In Sherlock, this idea of Watson as a thrill-seeker equal to Holmes is brought to the forefront, with Watson suffering from post-traumatic stress disorder and finding life after the army rather dull and unexciting. Geeky aside: fans familiar with the Canon will realize that the writers are riffing on Watson’s wandering wound in a way that references Doyle and makes perfect sense in the story.

Sherlock is what a reclusive detective starved for intellectual stimulation might be today. He’s rude, arrogant and yet still ten steps ahead of everyone. In some ways, he reminded me of one of Holmes’ modern-day successors, Patrick Jane on The Mentalist, who also doesn’t care what anyone thinks of him. He just likes being right.  Unlike Jane, however, Sherlock lacks charm. It’s his sheer intellectual brilliance that is his one defining trait. In the original stories, Doyle hints that Holmes is viewed as an eccentric by polite society. In this version, Sherlock  (perhaps jokingly) refers to himself as a high-functioning sociopath. He’s certainly a good example of the gifted but maladjusted genius.

The writers avoid giving Sherlock the obvious flaws, avoiding any drug use or other vices clear in Doyle’s stories and instead give provide new ones, such as harassing the police via text messages (Holmes always did love telegrams) and becoming so invested in being right that he nearly lets the villain of the first adventure kill him.

But what really makes this show shine is the relationship between the two lead characters. Outwardly, they seem mismatched but inwardly, they’re perfectly complimentary. Watson understands Holmes’ intellectual curiosity, Holmes quickly discerns another restless soul in Watson. Watching the push-pull between them in a true joy. While there have been numerous suggestions and lengthy discussion about whether Holmes is gay, the show stays with the original Canon version of Holmes as an asexual but that doesn’t stop the writers from having a bit of fun with the idea as everyone begins to assume that they are a romantic couple.

Geeky aside again: Martin Freeman is going to be Bilbo Baggins in Peter Jackson’s The Hobbit. I am somehow haunted now by a mash-up of Tolkien and Doyle, with Holmes being the one who uncovers where Sauron has hidden the one ring.

The three Sherlock movies were broadcast in three successive Sundays by Masterpiece Mystery on PBS stations and the DVDs are available for pre-order at the PBS website. I highly recommend them for any mystery lover and I’m looking forward to the next set of movies, tentatively scheduled for airing in the UK next August. Hopefully, they’ll again be carried on an American station as well. Quickly.

Go on a ‘Legend of Zelda’ Scavenger Hunt at Barnes & Noble 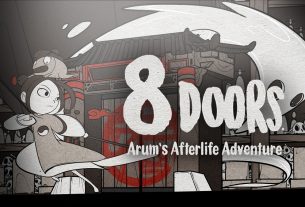