Happy Pride Month! All four of the books featured in this month’s Between the Bookends include some level of queer representation – some more obvious than others – to help kick off our month-long celebration. Throughout June, we’ll also have nearly twenty more LGBTQ books reviewed across the site so keep an eye out and we hope you find something to enjoy.

The Merciless Ones by Namina Forna

Sophie doesn’t consider herself to be much of a fantasy reader but last year she found herself thoroughly enjoying The Gilded Ones by Namina Forna. The sequel – The Merciless Ones – was published yesterday and Sophie was pleased to discover that she enjoyed it just as much.

At the end of The Gilded Ones, Deka freed the goddesses and discovered her own heritage as the Nuru – their daughter. However, at the beginning of The Merciless Ones, she is beginning to have doubts. She has reason to believe that her sacred mothers are lying to her and the other alaki, and is concerned by the way the goddesses and those around them speak about men and boys.

Working to free more of her sisters and increase the power of the goddesses, Deka begins to hear whispers about the god Idugu when the men she fights display powers she cannot explain. At first, Deka believes that someone or something is using an arcane object to mimic the powers of Idugu but soon she starts to suspect that the stories told to her by the mothers may be only a partial truth. As she works with the other alaki, the deathshrieks, and the uruni, Deka must try to unravel the truth behind a game being played by gods and figure out her place – while at the same time discovering just how powerful she can become.

The Merciless Ones is not an easy book to read. At the end of The Gilded Ones, the women of Otera were just beginning to discover their own power and now, several months later, we get to see the patriarchal society they live in clamping down on this potential revolution with all the brutality it can muster. The descriptions of violence against women and girls are relentless and vivid – Sophie had to take a break and read something else at the halfway point to give herself a break from it all. However, despite all that Sophie really enjoyed this book. She loved the twists that came from the revelations about the goddesses, and the insinuation that everything might not be as picture-perfect as implied at the end of book one. Women can deceive too and things are rarely as black and white as they first appear.

The end of The Merciless Ones is clearly set up for the next installment in The Gilded Ones series and Sophie is already looking forward to seeing where this story takes us next, especially given certain things revealed toward the end of this book.

Sophie has been enjoying the middle-grade horror series Thirteens by Kate Alice Marshall since 2020, so she was curious to pick up Our Last Echoes, a standalone YA horror/thriller by the same author.

Sophia’s earliest memory is of drowning – of being pulled from the salty water by her mother before she vanished – but according to her foster family, Sophia has never even been to the ocean and her mother died in a land-locked hospital. When a woman named Abby appears in her life bearing a photograph of a young Sophia and her mother on the tiny island of Bitter Rock, Alaska, Sophia knows where she has to go.

Bitter Rock is the home of the Landon Avian Research Center where Sophia has managed to apply for a summer internship. But the island has a strange reputation: people vanish there. The crew of a Russian ship. An entire community of back-to-the-land types attempting to found a commune. And apparently Sophia’s mother too. But Bitter Rock isn’t the only thing keeping secrets, Sophia has plenty of her own, not least what happens whenever she looks into a mirror. With the help of Abby and the research center director’s charming son Liam, Sophia hopes she can discover the truth about what happened when she was a child before she disappears too.

No matter where you think this book is going, Sophie promises you that you’re wrong! The first half is a masterpiece of scene-setting that uses interview transcripts, recorded video footage, newspaper cuttings, and other mixed media to explore Sophia’s time on the island. Every character she meets prompts new questions and leads you deeper into the rabbit hole that is Bitter Rock. Why are the birds so important? What really happened to all the people who vanished before? And just who is Sophia? It’s rare that a single sentence of a book can cause goosebumps to rise over Sophie’s skin, but Our Last Echoes pulled that off to perfection.

Sophie didn’t enjoy the second half quite as much as the first, the sense of creeping dread began to dissipate as answers began to reveal themselves, and Sophie always finds it creepier when things are hinted at and only glimpsed, rather than being revealed outright. The reveals here are wild and impossible to discuss without spoilers (and this is a book you really want to go into blind) so Sophie will just say that those with a love of classic horror will likely find much to enjoy here.

Queerbaiting is a term that those within fandom circles are mostly likely intimately acquainted with, while those on the outside have probably never heard of it. A simple definition is that queerbaiting entails the producer of a piece of media deliberately suggesting a queer relationship between characters that they have no intention of allowing to become canon. In practice, queerbaiting can be a very vague and often contentious area of fandom.

Queerbaiting and Fandom edited by Joseph Brennan aims to shed light on this subject by examining it from numerous angles. Well-known examples are looked at in detail – Supernatural‘s Destiel and Sherlock‘s Johnlock being particularly common examples – but there are also examinations of what queerbaiting can look like when it is focused on real people rather than fictional ones, and how the concept has emerged only in recent decades. This means that some fictional situations in older media – Xena Warrior Princess being a notable example – are not tarred by the queerbaiting label while similar modern examples are.

Queerbaiting and Fandom gave Sophie a lot to think about, particularly about how the meaning of a text is decided. Is the meaning of a text decided upon by the people that wrote and produced it, or by the viewers? What if those two meanings are at odds with one another? If the viewers get to interpret the meaning for themselves, can queer baiting exist or does the intent of producers still have meaning? Most of this is open to interpretation and the book was filled with valuable insights that helped her develop some of her own ideas about the subject.

Queerbaiting continues to be an ongoing area of debate in fandom circles and wherever producers and viewers interact. With LGBTQ characters becoming ever more mainstream, it’s a subject that won’t be going away any time soon and Queerbaiting and Fandom will be a valuable resource to anyone who wants to learn more about it.

Casey McQuiston’s previous two books have been some of Sophie’s absolute favorite reads of the last two years, so she was very excited to pick up I Kissed Shara Wheeler, the author’s first YA novel. Unfortunately, she didn’t enjoy this one nearly as much.

Chloe Green is a queer teen approaching the end of senior year at Willowgrove Christian Academy, providers of a “Christ-Centered Education” in Alabama. Since transferring from liberal California, Chloe has focused on academics with just one real goal: beating the principal’s perfect daughter Shara Wheeler to the title of valedictorian. But the day before prom, Shara found Chloe alone and kissed her then staged a disappearing act the very next night, minutes before being crowned prom queen – and Chloe has no idea why.

Now, Chloe is determined to find out where Shara Wheeler is and why she kissed her. She ropes in Shara’s quarterback boyfriend Smith and her next-door neighbor Rory (whom Shara also unexpectedly kissed) and soon the trio is led on a scavenger hunt across town following notes left by Shara on perfect pink stationery. Chloe wants to drag Shara back in time for finals so she can beat her fair and square, but as the hunt progresses, Chloe realizes there’s more to every player in this drama than she ever suspected.

The idea behind I Kissed Shara Wheeler was a great one, but Sophie just never got on with this book. Firstly, the setting felt too unbelievable. Willowgrove is such a fundamentalist school that it doesn’t even have an official prom (dancing is a sin) yet is apparently fine with the drama department throwing an annual gender-swapped performance of the senior play complete with the male students wearing dresses, makeup, and copious amounts of glitter. She also found the main characters largely unlikeable and was often confused by who was who from the overly large cast of supporting characters, few of whom were fleshed out enough to be memorable. Finally, Sophie felt that there was more chemistry between the dishtowels hanging in her kitchen than between the two main love interests.

Sophie was extremely disappointed by this one, but then not every book can be a hit no matter who the author is. 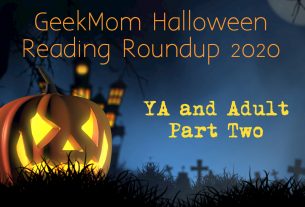