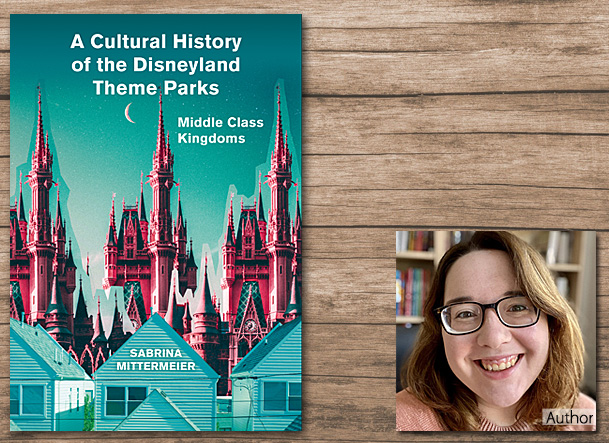 I have been a fan of Disney theme parks ever since I first set foot in one nearly twenty years ago, and a fan of theme parks in general since I was a small child. Since my first visit to the Magic Kingdom in Florida, I have delved deep into what makes the Disney theme parks so unique and decided to combine my interests in fan studies and theme parks by reading A Cultural History of the Disneyland Theme Parks by Sabrina Mittermeier which analyzes the parks from an academic perspective.

A Cultural History of the Disneyland Theme Parks examines six of Disney’s theme parks, specifically those that closely follow the original Disneyland layout, and explores how the parks are designed and built to cater to the middle classes of their respective locations. Each chapter looks at one of the parks at the time it opened and considers its relative success or failure, linking this back to its environment.

The book opens with an introduction that considers “The Cultural Relevance of Disneyland”. While some detractors might claim that Disneyland is just another one of the hundreds of theme parks around the world – and in many ways, they would be correct – Disneyland (and the Magic Kingdom style parks in particular) have gained a place in our overall culture that no other theme park has ever come close to replicating. This introduction offers an explanation of why this is, and how the Disney company was able to create this cultural relevancy, partly through what Karal Ann Marling calls the Architecture of Reassurance.

Part One explores the American Disney parks: Disneyland in Anaheim and the Magic Kingdom in Orlando, while also touching on EPCOT thanks to its unique history that intertwines it inextricably with the Magic Kingdom park. Both parks were instant successes and have remained so for over 60 years. The Magic Kingdom itself is the world’s most visited theme park and has been for many years. The book looks at how Disney used the optimism of post-war America to sell its original park to the newly wealthy and leisure time-rich middle classes, then tweaked their winning formula just enough to do it again 16 years later on the East Coast in a very different world.

Part Two moves its focus overseas, covering the four international Disneyland style parks in chronological order by opening date. The first chapter looks at Tokyo Disneyland, a unique park that repeated the success of its American cousins by tapping into the newly established Japanese middle classes and using glocalization techniques to appeal to the emerging kawaii culture. Tokyo Disneyland has remained steadily popular, drawing on the appeal of Western entertainment to Japanese audiences.

The success of Tokyo Disneyland imbued the company with an air of hubris which was quickly demolished by its financial failures at Disneyland Paris (then called Euro Disney). Here, as well as looking at the reasons behind the changes made to the park’s appearance – for example, the Paris castle was designed to be larger and more impressive than those in the American parks partly because in France, the majority of visitors are used to seeing real castles regularly – the book also explores the many reasons behind the park’s famous failure. These reasons include spiraling costs, a failure to understand and work in harmony with local working practices in France, and an overall misunderstanding of European vacation habits. Rather than trying to pinpoint the failure on a single cause, the book shows how many elements came together to spell disaster for Disney and caused them to briefly become a laughing stock, as anyone who watched The Simpsons episode “Itchy & Scratchy Land” will recall.

The final two chapters look at the Chinese parks in Hong Kong and Shanghai. The only country besides the USA to host two Disney parks, China has an unusual relationship with Disney and the parks themselves reflect this, partly as they are less able to rely on an ingrained nostalgia for their characters that has been passed down through multiple generations. The Shanghai park, in particular, is possibly one of the most interesting Disneyland parks ever built and ventures the furthest from the original template established in 1955. Shanghai once again relied upon a newly emerging middle-class audience as a recent cultural shift in China has allowed for more income and leisure time for many families, mirroring the socioeconomic environment of California in the 1950s.

Interestingly, as we approached 2020 it seemed that Disney was actively trying to price out even the lower to middle-income end of the middle classes in its American parks. Ever-increasing admission and sundries prices and a trend toward premium events and experiences (e.g. Disney After Hours and the Star Wars: Galactic Starcruiser hotel) are making visiting the parks prohibitively expensive for many more families than ever before, but with seemingly endless construction taking place and events sold out months in advance, this doesn’t yet appear to be hurting the bottom line of the parks division in any way. With all the Disney parks around the world mostly reopened to pre-covid standards after years of closures and restrictions, it will be interesting to see how the parks bounce back and whether Disney will once again need to reach out to its beloved middle-class customer base in order to recover some of the damage caused by COVID-19.