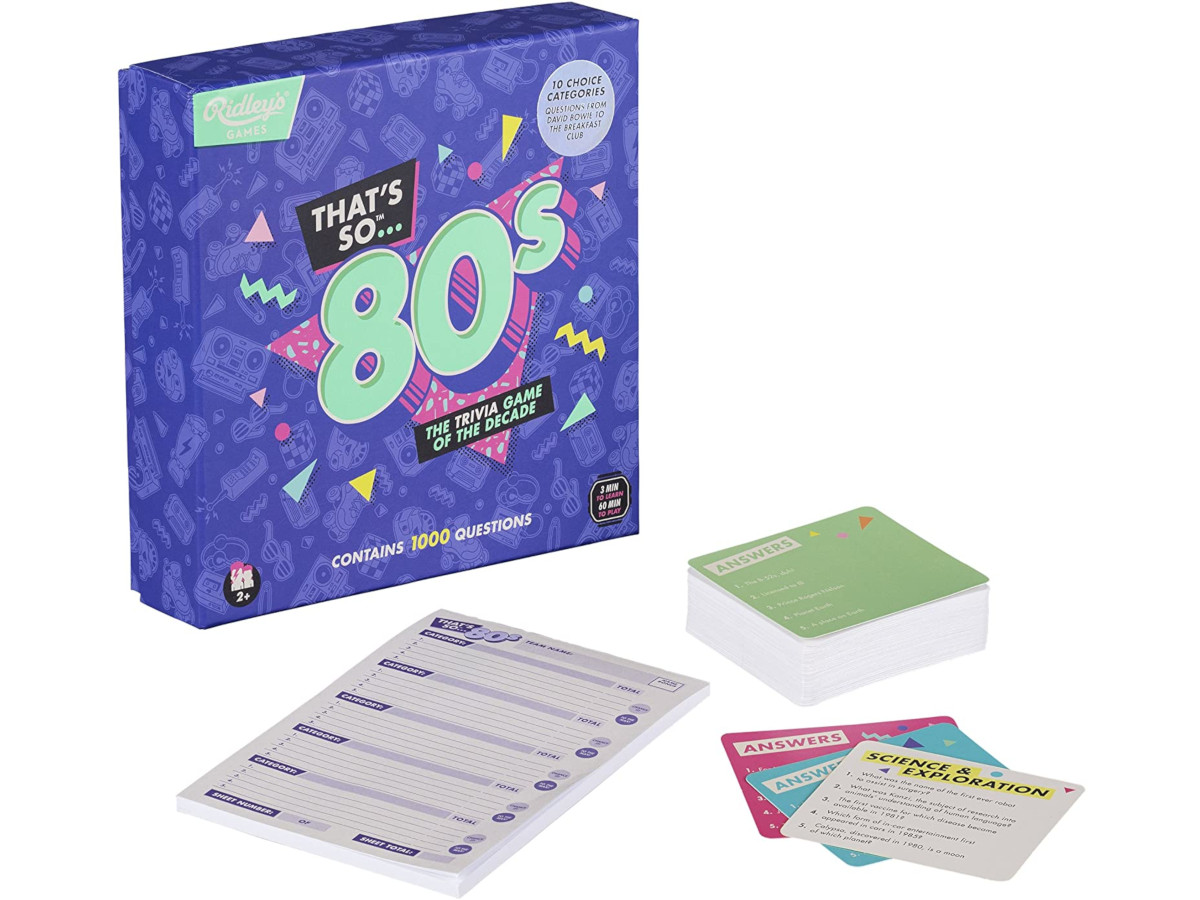 Trivia games have been pretty popular (at least in some circles) since Trivial Pursuit came out in the 1980s. Though many of their versions cover general knowledge, some are more focused, including their Baby Boomer, 1960s, and 1980s versions.

Having been born in 1973, I really enjoy ’80s trivia, since it’s the one decade that was totally encapsulated in my youth. And we remember our youth in ways we don’t remember any other time. But the 1980s version of Trivial Pursuit covers a lot of topics from news stories and things that adults paid more attention to than I did. It’s harder than you think.

Enter That’s So ’80s: The Trivia Game of the Decade from Ridley’s Games. This new game has 1000 questions and is for 2 or more players. The cards are organized a bit strangely, with several questions—all in the same category—on each card. There are 10 categories, and thus 10 kinds of cards: Music, Movies, Hobbies & Technology, News & Politics, Pop Culture, Science & Exploration, Sport, TV, Art & Literature, and Who Said or Sang That? Each card has five questions. By organizing questions this way, it does make it easier to avoid certain topics (like Sport), but it also means you have to keep track of more card types. It was a bit disorienting, but we figured it out.

Though it isn’t an easy game, it’s hard in a different way from Trivial Pursuit. While still a massive challenge, I had a better shot of getting these questions correct, as they cover a broader set of knowledge, and the questions are phrased in less cryptic ways. It’s fun for all ages, but only if all those ages either lived through the ’80s or have a particular interest in the decade.

When I played with my family, it wasn’t ever really clear who was going to win. In the end, I did win (being the only one in the group who was both alive and remembered the decade), but only barely.

My teenage son knew a lot of the answers, because he pays close attention to popular culture and he is a good guesser for answers in the form of a year. So, for a while, I thought he’d win. But no. I managed to eke out a win in the end, despite having trouble accessing some long-buried memories of obscure names.

If you’re looking for an easy walk down memory lane, this isn’t the game for you. But if you remember a bunch of the ’80s and want to stretch those neurons, this game is a lot of fun.

That’s So ’80s is available now, currently on sale at Amazon for $15.60. Ridley’s Games has many other trivia games to offer too, including That’s So ’90s and music trivia based on the 1990s and the 2000s. They also made the Inspirational Women Trivia Card Game I reviewed previously.