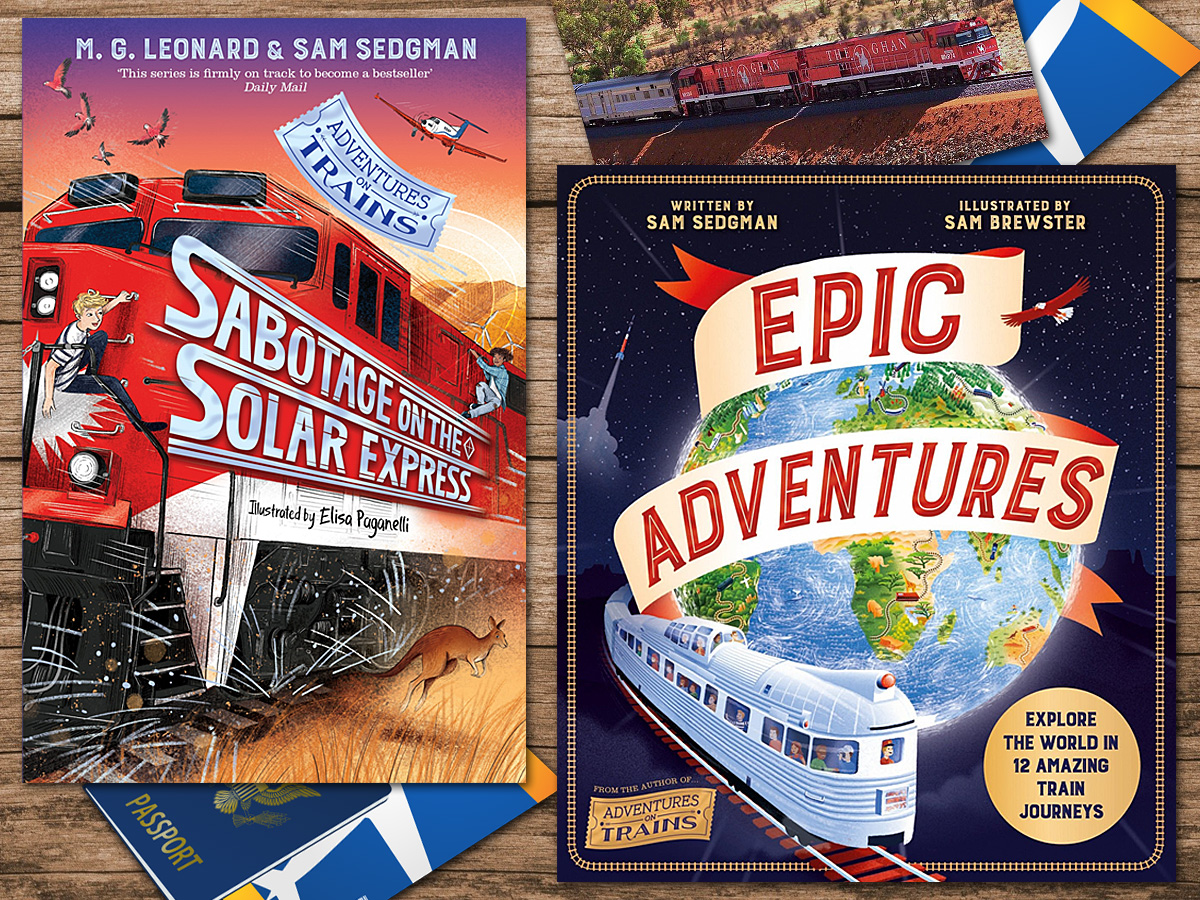 Adventures on Trains has been one of my favorite ongoing middle-grade series for a few years now, so I was thrilled when we not only got a new book—Sabotage on the Solar Express —-this month, but a non-fiction spin-off called Epic Adventures as well!

Sabotage on the Solar Express

Sabotage on the Solar Express by M.G. Leonard and Sam Sedgman is the fifth book in the Adventures on Trains series and sees Hal and his Uncle Nat heading down under for a train ride across Australia. The pair have been invited to ride on the maiden voyage of a brand new prototype train: Reza’s Rocket. This solar-powered train uses hydrogen fuel cells to race across the outback and has been funded by Uncle Nat’s old friend, the billionaire August Reza, with engines designed by Boaz Tudawali, a fourteen-year-old Aboriginal boy who won Reza’s contest.

However, before they board the train, Reza’s daughter Mariane approaches Hal with fears that someone is targeting her father. After the events of book two, Hal is initially dubious about her claims, but once the group has boarded, they quickly learn that someone has indeed sabotaged the train. It’s up to Hal and his uncle to figure out who is behind the scheme and how to stop the train before they run out of track.

Sabotage on the Solar Express is basically the movie Speed for today’s kids with its high-speed race across the outback as the train races out of control with no working brakes. The stakes are very high in this particular Adventures on Trains story with everyone on the train at risk, and it was interesting to see everyone’s true personalities come out when the full extent of the danger was discovered. I did find one element of the big reveal at the end to be a little far-fetched, but who cares in a fun middle-grade like this? I also loved that all the chapters were named after movies, something I didn’t pick up until I was much further into the book than I want to admit!

The book also has a strong focus on STEM. Boaz is keen to share lots of information about his invention and, in doing so, there’s ample opportunity for discussions about solar energy, how we currently power vehicles—especially public transport—and what the future might look like, without it all coming across as just endless exposition. There are even diagrams, although the authors do warn against trying any of these experiments yourself because they have the potential to be dangerous. I really appreciated that Boaz was indigenous without his personality being focused entirely on stereotypical elements. Boaz is a true twenty-first-century science nerd and proud of it while also being aware of his heritage and the cultural and spiritual importance of the land around him.

One slight disappointment I had with Sabotage on the Solar Express is that in the previous book—Danger at Dead Man’s Pass—a big reveal was made about Uncle Nat that I expected would be an ongoing plot point, however, this was never mentioned at all in this book which felt a little odd. Hopefully, this is something that will come up again in future books such as The Arctic Railway Assassin which is due out in October of this year. I also noted that there were fewer pages given over to exploring the country the book is set in than usual. This is largely due to the nature of the plot—you can’t exactly get off a sabotaged train at regular stops to admire the scenery—but it did feel like something was lacking. The only significant mention of an Australian landmark was at the beginning when Hal and Uncle Nat fly in a small plane and the pilot takes them on what appears to be a short detour to see Uluru from above, despite Uluru being 300km away—that’s quite the detour!

These small factors aside, Sabotage on the Solar Express is probably my favorite Adventures on Trains book so far. Despite the relatively slow start, it is action-packed from the moment everyone boards the train and filled with tension as the stakes increase and discoveries are made. It was great to see more returning characters with some genuine growth from most of them, and I’m already excited for what lies in store for Hal and Uncle Nat.

Epic Adventures is a short, non-fiction book that explores twelve great train journeys you can take from across the world. Nearly every continent is featured (unsurprisingly, there are no railways in Antarctica just yet) with fascinating facts shared about the countries and cultures, flora, and fauna that surrounds these journeys.

Each journey receives two fully-illustrated double-page spreads. The first shows a map of the route and how it is situated in the country/countries it travels through, along with facts about the route and the destinations along the way. The second shows scenery and wildlife from along the route, such as salt plains in Bolivia or lakes, mountains, and forests in Canada. All over both spreads are facts about not just the trains and railways themselves but the wildlife, history, landscape, culture, technology, and much more that surround them.

Interspersed throughout Epic Adventures are other double-page spreads on topics like “Abandoned Stations” and “Epic Engineering,” plus there’s a section on other interesting railway journeys you can take that didn’t fit into the book because there are enough in most countries to fill several books each!

If you have a kid who has been enjoying the Adventures on Trains series, or who just loves trains in general, then this will be a great addition to their shelves. Adult train nerds will almost certainly love it as well and will probably learn something from it too—I found myself sending many did-you-know texts as I read—so don’t discount this one as a potential Father’s Day gift later this year.

‘The Happiest Book Ever’ Puts Anytime Sunshine in Your Hands