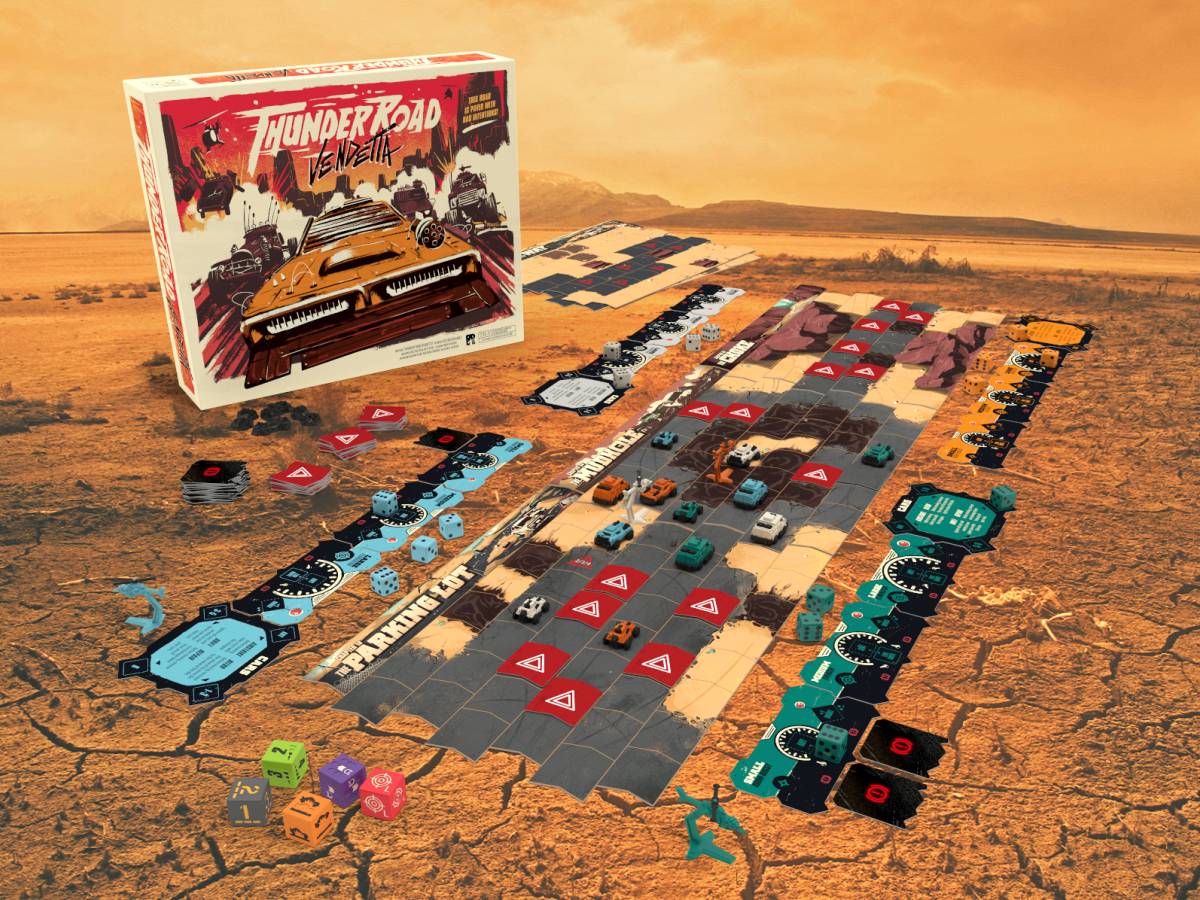 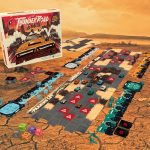 Back in 1986, Milton Bradley released a game called Thunder Road, where players raced and fought each other down a post-apocalyptic highway. Now, Restoration Games is bringing out a reimagining of that game with Thunder Road: Vendetta. I got to demo the game online back in October with Suzanne Sheldon from Restoration Games, and fellow GeekDad contributor Jonathan Liu.

What Is Thunder Road: Vendetta?

Thunder Road Vendetta is a game for 2-4 players(or 2-5 players with the Big Rig & the Final Five expansion). It’s a car racing and combat game with dice placement for ages 10 and up, and takes about 45-75 minutes to play. It’s currently seeking funding on Kickstarter, with a pledge level of $50 for a copy of the base game, or $145 for the game and all expansions. The campaign runs through Monday, February 14th.

What Are Kickstarter Quick Picks?

Kickstarter Quick Picks are short looks at projects currently on Kickstarter that are of interest to me, and by extension, many of our GeekDad readers. A Quick Pick is not an endorsement of the Kickstarter campaign, nor have I (as yet) received any product copies to review. I have played an early version of the game online on Tabletop Simulator, however, and will be sharing my impressions of gameplay. If you like what you see here, go check out the campaign and decide for yourself if you’d like to back it, or wait until GeekDad has had a chance to go hands-on. As always, caveat emptor- let the buyer beware.

How to Play Thunder Road: Vendetta

The goal of the game is to be the first to move one of your cars off the Final Tile, or be the last player standing.

Choose a starting Rear Road Tile, placing it on the table. Shuffle the remaining Road Tiles to create a draw pile, and draw 2 more tiles, placing them to the right of the Rear Road Tile. Place the Finish Line nearby.

Shuffle the Hazard Tokens facedown, and place one facedown on each of the Hazard Locations on all three tiles.

Create a pile of facedown Damage Tokens. Place the FX Dice nearby.

Each player chooses a crew color and takes the matching Command Board, 3 dashboards, 3 cars, chopper, and 4 movement dice. Each player sets up their dashboards in a row, and all of their cars to the left of the Rear Road Tile. The player who rolls the lowest on their movement dice goes first, taking the Road Die.

At the start of a round, all players roll their 4 Movement Dice. Additionally, the First Player rolls the Road Die. The Road Die gives an optional bonus move to each car that stays only on road spaces during their turn.

On a player’s turn, they will assign a die to one of their operable cars, move that car, and shoot with that car if able.

Place one of the rolled dice on an operable car. That will be your movement value for the next part of your turn. Additionally, once per round you may also assign one die to the command board. The command board allows you to call in an Airstrike with your Chopper, use Nitro to boost your movement value, Drift to pass through other cars or wrecks safely, or Repair to remove damage tokens from cars.

Your car must move the full amount shown on your movement die, by moving through any of the 3 spaces in the car’s front arc. If a car enters a space with a Hazard Token, you immediately flip the token and resolve it.

Whenever a car takes damage, it immediately loses its additional moves. If a car moves into a space with a wreck or another car, it Slams. Place the moving car on top of the car currently in that space, and then resolve the Slam using the Slam Die and Direction Die. This tells you whether the top or bottom car is going to move, and in what direction. This can result in other Slams occurring.

You can shoot a car in the front arc of your car or chopper. To shoot, roll the Shooting Die. If the size show on that die matches the size of the car you’re shooting at, then the owner of the damaged car draws and resolves a Damage Token.

Moving Off the Front of the Board

When a car moves off of the front of the Lead Road Tile, as long as it wasn’t the Final Tile, then the following happens:

If the player moves off of the Final Tile, then the game is over. The Final Tile is determined based on the number of players.

A game of Thunder Road: Vendetta ends either when a player moves one of their cars off the Final Tile, or when only one player has an operable car.

Why Check Out Thunder Road: Vendetta

A quick disclaimer: I never played the original Thunder Road. So, no journeys down nostalgia road here…my opinion is based solely on playing through this current version of the 80’s game. Though, undoubtedly viewed through the lens of my longtime love for The Road Warrior and playing video games like Twisted Metal.

Here’s that opinion: I had a blast playing Thunder Road: Vendetta. While it’s always fun to shoot at another player’s car, it’s even more fun to slam into them, even if sometimes that move can backfire and result in your own car getting damaged or even wrecked. There’s something so satisfying when your opponent’s car careens off onto a hazard, which then sends their car slamming into another opponent’s car, which then smashes that opponent’s car into the side of a mountain. The sheer automotive carnage that takes place in this game will bring smiles to everyone’s faces.

Mentioning chaos undoubtedly sets off a red flag for some gamers. If you’re one of those people that only plays Euro games, the randomness in Thunder Road: Vendetta will probably not be to your liking. But it’s that very unpredictability which makes this game so enjoyable. You don’t know what’s lying in wait under those Hazard Tokens, or what’s going to happen when your car collides with another car. To an extent, you don’t even know what lies down the road, as you’re cycling through different tiles as you drive along the highway.

That doesn’t mean that there aren’t meaningful choices to be had, though! You’ll be jockeying for position constantly, to either race ahead of your competitors, or to blow them off the road. Yes, your movement is based off of rolled dice, but you choose where to allocate those dice to best fit your strategy. Which command you choose to make each round on your Command Board, and when you make it, can dramatically shift the dynamics of the race.

And that’s just with the base gameplay, which is all I’ve experienced personally. The stretch goals and expansions in the campaign provide all sorts of different enhancements and new mechanics to the gameplay, while still looking to retain the ease of learning and playing of the base game.

All backers of the Kickstarter will receive the Extra Ammo mini expansion, which to date allows you to alter the road conditions on each road board, and give different bonuses to your airstrikes. That expansion continues to grow through stretch goals.

The Big Rig and the Final Five expansion adds a 5th player, as well as a Big Rig truck and a 5-member motorcycle gang, each with their own unique mechanics.

Carnage at Devil’s Run adds new boards, with ramps to make jumps, and various new road effects including a chance for your cars to be set on fire.

Choppe Shoppe gives you Crew Leaders, which each have different special powers and custom commands. Additionally, that expansion allows you to customize your cars with upgrades, giving new abilities to them.

In the campaign, you have the choice of getting a base pledge and adding any individual expansions you may want, or purchasing an all-in pledge that includes all of the expansions. There are some advantages to the latter: not only do you save money versus purchasing everything separately, but the “Maximum Chrome” pledge ships everything in one large, chrome foil-stamped box, along with a custom plastic insert to hold all the components. And if you’re pledging in the United States, shipping for the Maximum Chrome pledge looks to cost the same as for the base pledge.

If you’re a fan of the Mad Max or Death Race 3000 movies, or you never miss a Fast and Furious movie, then this is a Kickstarter campaign you won’t want to miss. I know I’m anxiously awaiting the time I can get Thunder Road: Vendetta onto the table with some friends, when we can all enjoy the vehicular mayhem together.

For more information or to make a pledge, visit the Thunder Road: Vendetta Kickstarter page!

Click through to read all of “Kickstarter Quick Picks: Channel Your Inner Mad Max With ‘Thunder Road: Vendetta’” at GeekDad.If you value content from GeekDad, please support us via Patreon or use this link to shop at Amazon. Thanks!

Venture Into the World of the Mistborn Adventure Game