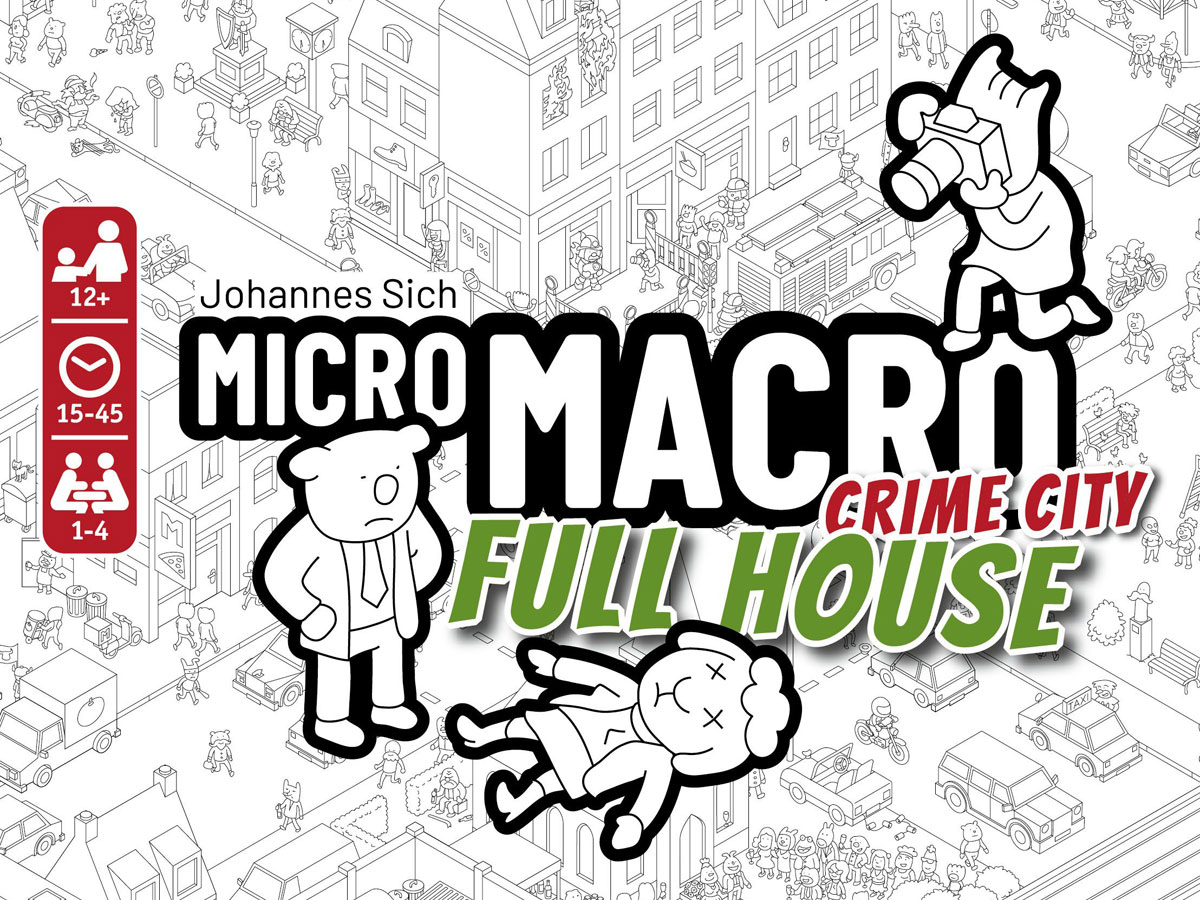 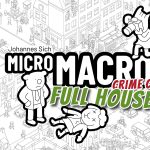 It’s time for another visit to Crime City, where all sorts of dastardly deeds are being perpetrated. Can you follow the clues to figure out what happened in each case?

MicroMacro: Crime City – Full House is a cooperative mystery-solving game for 1 to 4 players, ages 8 and up, and takes 15 to 45 minutes to play. It is available directly from the publisher for $29.99. Full House is the second game in the series, though it is a standalone game and you don’t need to have any knowledge of the original to play. However, if you have played the original, you’ll spot some Easter eggs and references to things in the first game. Since the gameplay is essentially the same as the original, I’ll repeat portions my original review and note some of the differences in this version.

Although the components aren’t very colorful, the antics of the citizens of Crime City certainly are, as you’ll discover on the map. It’s a huge fold-out map: 75cm x 110cm (about 30″ by 43″) so it takes up a good portion of my table—you might even spread it out on the floor or hang it on the wall. Every inch of it is covered in a detailed, isometric view of Crime City, filled with lots of little anthropomorphic animal people.

The illustrations are in a clean style, and despite the fact that there are a lot of very similar-looking people, there are little details that set them apart. Characters are depicted in multiple places, like a comic strip, showing their movements across the city over time. The map is chock-full of things happening and fun little details, and you never know what’s going to be important to a case. The illustrations are quite small, so it definitely helps to have a bright light, and those who need reading glasses will really appreciate having the magnifying glass too.

Case cards include a white introduction card that outlines the case, and then a series of black cards that walk you through things to look for. Each card has an icon associated with the case so you can sort them out easily, plus a card number (and the total number of cards in the case). They’re also ranked from 1 to 5 stars, indicating the difficulty of the case.

One new feature in this version is a content icon at the top left of the case card: the cheerful face means there isn’t any murder, physical violence, or sexuality involved; the face with glasses means it will include accidents, murders, and corpses; the face with the eyepatch has more explicit themes. I appreciated this addition, because I played through the first one with my youngest daughter (who’s now 8) and although certainly the game is all about crimes, there were a couple where the story went in some unanticipated directions and required awkward explanations. This will help you sort out your level of exposure for your kids, or you can play some of the cases ahead of time to check what’s involved before your kids play.

The envelopes are a sort of wax paper envelope, and when you first open up the game, you’ll need to divvy up the cards into the various envelopes. The one downside is that they’re translucent, so you have to be careful not to flip them over or you’ll see the solution to the last card of the case. (It might have been nice to have an end card for each case that covers up the final solution.)

The magnifying glass is a plastic card-sized lens, like the sort you might use for reading. It comes with a MicroMacro sticker that you can place on one end, though we opted not to.

You can download a copy of the rulebook here. You can also play an online demo case here.

The goal of the game is to solve a crime by following the victim’s actions on the map and then tracking suspects or other clues.

Unfold the map and pick a case. Choose a case and flip over the white card and read it to all the players. This will give an overview of the case, and has an illustration (usually of the victim). The first black card will have your first specific task.

When you think you’ve found the solution to your task, one player should look at the back of the card to see if you’re correct. The back of the card will have a cropped portion of the map shown along with the map coordinates, and also a bit of story. If you’re correct, then the card is read aloud to all the players. Otherwise, the other players continue to look for the solution.

As you solve each task, you move on to the next card.

The game ends when you get through all the tasks and solve the crime!

As an advanced alternative, you can also try solving a crime by just looking at the white starting card, and seeing how much of the story you can figure out without looking at the black cards. Then, after you think you’ve pieced together the whole crime, go back through the black task cards and see if you missed anything.

Why You Should Play MicroMacro: Crime City – Full House

As I mentioned in my review of the first MicroMacro title, we really loved playing through the cases, and we liked to see how much we could figure out without referring to the cards. With the tougher cases, that gets trickier, or sometimes there are simply questions that the game will ask that lead in unexpected directions.

In a few of the cases, you might pursue several different leads: for instance, one murder has five potential murder weapons nearby, so then you have to track down the owner of each one and figure out who doesn’t have an alibi. Another case has three victims, so you can pursue the three different leads in whatever order you like.

And, as with the original, the map has a whole host of little vignettes depicted that aren’t even part of the cases, so even after you’ve completed all 16 cases, you can continue to pore over the map and look for other stories. It was also fun to find some allusions to the original—a pair of robbers who got away last time are back up to their shenanigans again; there are victims in this version who are related to victims in the previous game.

The cases vary in length: the shortest ones have 5 cards, and the longest is 15 cards, even more than the biggest case in the original. Some can be solved within a small area of the map, and others send you on a chase all over the city. There are even times where you have to use clues to figure out where to go next because the trail goes cold and you don’t see the character anywhere nearby. Or, you may have to figure out which vehicle a character is driving; there are a lot of generic cars, but there are also some with distinguishing features that you can follow around town.

About that age rating: most of the cases involve death (usually murder), and there are also references to drugs, alcohol, adultery, as well as some more abstract concepts like corporate conspiracy. Since I was the one reading the cards out loud, I tended to pass over some of these explanations when playing with my kid, but there’s no hiding the fact that people in this city were getting killed for all sorts of reasons, some of them very petty. The guy in a long coat flashing people (seen from behind) is back—your kids may or may not spot him or know what’s going on, but you should be aware of the possibility. My guess is that Europeans are generally a bit less prudish than Americans (the game is from a German publisher), so that may explain the age rating on the game; if this were an American TV show or movie, I’d guess it would get a PG or PG-13. That said, if you’re prepared to guide your kid through some discussions of ethics and morality, it is a lot of fun to play.

As with the original, the nice thing about MicroMacro: Crime City – Full House is that when you’re done, you can easily pass it along to somebody else to play because nothing gets used up or destroyed. I’ve loaned my copy out to friends—just be sure they put all the case cards back into the envelopes when they’re done. If you like seek-and-find games, and you don’t mind spending some time thinking about crime and corruption, this is a fun mystery game that will keep you busy for a few hours!

For more about MicroMacro: Crime City – Full House or to order a copy, visit the official website.

Click through to read all of “Find More Murder and Mayhem in ‘MicroMacro: Crime City – Full House’” at GeekDad.If you value content from GeekDad, please support us via Patreon or use this link to shop at Amazon. Thanks!