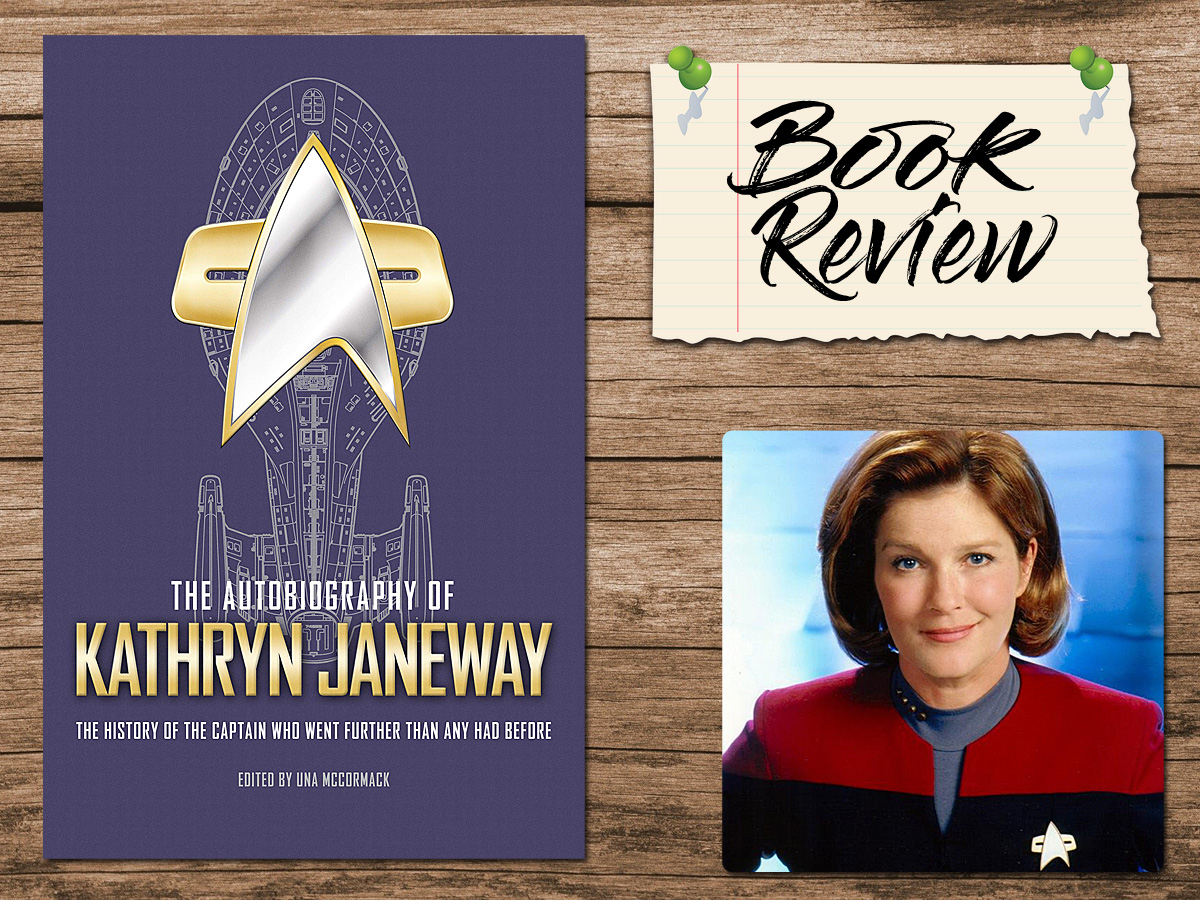 Voyager has always been my favorite Star Trek series, and as I write this I’m partway through an (admittedly very slow) rewatch, so when I spotted The Autobiography of Kathryn Janeway edited by Una McCormack in my Audible recommendations, I knew it was a must-read. Even more exciting, the audiobook is narrated by Kate Mulgrew – Captain Janeway herself.

As with any good autobiography, The Autobiography of Kathryn Janeway begins with Janeway’s childhood on a farm in Bloomington, Indiana, with her father Vice Admiral Edward Janeway, mother Gretchen a children’s book author and illustrator, and younger sister Phoebe. The picture painted here is admittedly rather rose-tinted, but that is to be expected when you remember this is being written by someone who spent seven years believing they might never lay eyes on their childhood home (or planet) again. Also expanded upon significantly are several stories that were only touched upon during the show, such as Janeway’s comment in “Deadlock” about walking home during a thunderstorm after losing a tennis match, which help to add significant context to the stories when they turn up in an episode you’re watching.

Janeway’s years at Starfleet Academy ended up being some of my favorite chapters as we get to see a young Janeway newly out in the world and finding her feet. There’s a good balance here between discussion of Academy life – the classes she took, difficult exams, and professors she struck up a rapport with – and life outside the classroom with friends and even a surprising romance. My favorite part here recounted Janeway’s participation in the annual graduating class prank, and especially her words when hauled up before the President of the Academy! After this, we get to spend several years/chapters watching Janeway rise through the ranks of Starfleet under the command of both supportive and difficult captains. It was difficult not to share her frustrations at being undermined and ignored by a superior (who among us hasn’t experienced similar) who believed she hadn’t truly earned her place and chose to take out those frustrations on his own officer.

Once Janeway earns her Captain’s seat and the book hits the Delta Quadrant years – more than halfway into the book – I felt it became a little less interesting. That’s mostly because at this point the story had to fit within an existing structure, and so these chapters occasionally felt like season recaps, just briefly touching upon some of the events already seen on the show. On the other hand, it also gave Janeway the scope to expand upon these events and their lasting repercussions in a way a 45-minute procedural show never could. By far the most interesting of these has Janeway considering her actions in the episode “Tuvix,” easily the most controversial episode of Voyager ever made. One of the biggest criticisms of that episode was that it never allowed the central characters to reflect upon the choice Janeway made and express their opinions on it. Here, we finally get to hear those conversations (or at least the one between Janeway and Tuvok) and discover that Janeway’s decision on that day is one she still debates with herself many, many years later.

The final chapter shows us life for Janeway and the Voyager crew after they returned from the Delta Quadrant, and it’s worth noting that it’s debatable how canon any of this is. Regardless, it was great to hear how the key characters settled back in (or didn’t) to life in the Alpha Quadrant. There were certainly a few surprises here, but I also appreciated how the author took into account the trauma every person would have gone through during their years on Voyager, and how no one would have simply been able to step back into their previous lives as if nothing had happened.

Reading The Autobiography of Kathryn Janeway in 2022 brought something home to me that I hadn’t considered before. Isolation and loneliness are two of the key themes of Voyager, making that show very different from every other Star Trek series to date and the series incredibly relevant to audiences over the last two years. The crew of Voyager is stuck together spending most of their days inside their home, unsure when (and if) they will ever see their loved ones again and facing dangers any time they step outside or encounter anyone from outside their bubble. Sounds depressingly familiar, doesn’t it? Listening to Janeway recall the difficulties she faced during her years stranded in the Delta Quadrant felt all the more poignant after experiencing my own periods of isolation during lockdown, and that made this story set thousands of light-years from home feel surprisingly relatable and even intimate.

Admittedly, there are a few elements that are a little on the nose here. One that immediately springs to mind is the choice to make Janeway’s favorite childhood book be The Wizard of Oz. The story of a young woman and her friends whisked off to a faraway land, uncertain as to how they’ll get home and relying on the strange inhabitants of the place for help and guidance… it’s all just a little too perfect, but it’s also entirely forgivable as it certainly makes for a good story.

Overall, I loved The Autobiography of Kathryn Janeway and raced through it surprisingly fast. This is a book I would absolutely recommend listening to as an audiobook because hearing this story told in Janeway’s voice and with her own emphasis added so much to every word, but whichever way you choose to experience it, this is a must-read for all fans of Star Trek Voyager.

GeekMom received a copy of this title for review purposes courtesy of Audible. 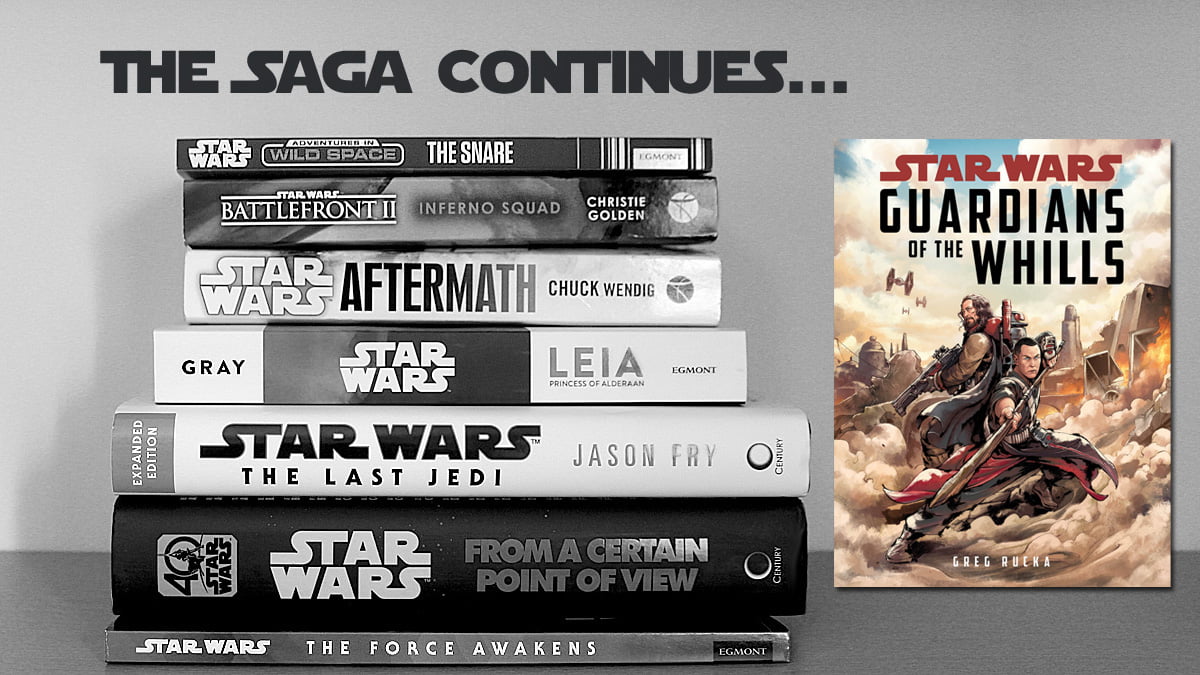 The Saga Continues: ‘Guardians of the Whills’ by Greg Rucka

The Finale of the Hollows: An Interview with Kim Harrison