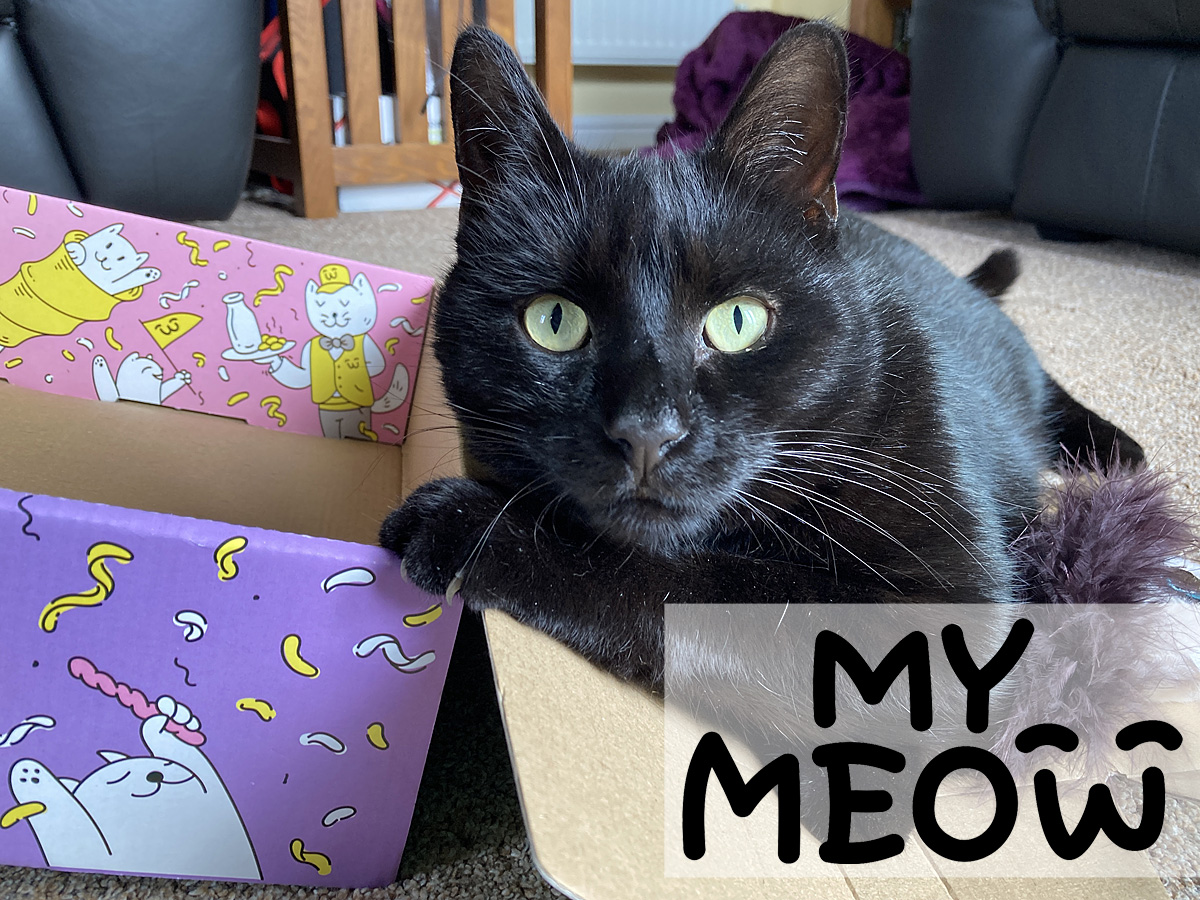 What is My Meow?

My Meow is a monthly subscription box service for your cat from the same company that created the WufWuf subscription box for dogs. Each month you will receive a large box in the mail stuffed with toys and treats for your favorite feline friend, plus a magazine for you.

What’s in a My Meow Box?

Every My Meow contains a selection of treats and toys plus a magazine. Each box is themed and the toys and other items will be based around that theme; box themes we have received have included Grumpy Cat, Fish and Chips, House of Mouse, and Hallomeow. The magazines contain interesting stories and features like “Marvellous Animated Mice”, “Great Songs About Cats,” and “Creepy Cats of Cinema” and DIY projects including recipes for cat treats, cat-themed pumpkin carving ideas, and a make it yourself cat toy. There’s also a regular Doctor Mew feature that answers a feline health question in every issue, plus some puzzles and a selection of photos taken by subscribers and shared to the MyMeow Instagram page so your cat could be a future star!

The cat toys included have all been of high quality with one single exception, a treat dispenser that fell apart any time one of my cats tried to use it. The majority of the toys have been plush items—often scented with catnip or with a crinkly material inside. The Fish and Chips box contained a crinkly french fry, and the Hallomeow box contained a stuffed pumpkin, bat, and spider set. There are, however, other types of toys that add a lot of variety and interest. Highlights have included a rechargeable fish that flops around when triggered through motion, a battery-powered “mouse” that behaved similarly to a Hexbug, and a tube with an animal design on the outside and a pullable tail that makes a cricket sound. While not every toy appealed to all of my three cats—Marnie loved the flopping fish but it scared Salem, Artemis loved chasing the battery-powered mouse but Marnie was too lazy to care for it—they have all appealed to at least one.

Every box also contains a selection of cat treats, from standard packs of crunchy bites to more posh selections. These treats were decidedly more hit or miss than the toys. Some, such as the Whiskers Dentabites and the Webbox Tasty Sticks, were beloved by all, but others, such as the Martha’s Duck Star Bites and the Trixie Tuna Strips, were soundly rejected by not only my three cats but both of my sister’s cats as well. I noticed that many of the items that the cats rejected were much tougher than the more popular treats, often having a texture close to jerky. Given the finicky nature of most cats, it’s not surprising that some treats in a varied subscription box like this will be rejected, and with the selection changing each month you at least know that your cat won’t tire of the same old thing, but do be aware that if you’re unlucky and get a box filled with treats they refuse, it could feel like a waste of money.

While most of the items have been treats and toys, we have also received a few other items as well. One of these was a standard bag of catnip sprinkles—ideal for topping up older toys, another was a fantastic fold-out cardboard tunnel that our cats have loved hiding inside and chasing one another through—but the other was a little stranger. In our first box, we received a tube containing a cough syrup-style bottle of Natural Detox Dietary Supplement for Cats. This is a “blended herbal water” that you can add to your cat’s water or food and contains things like valerian, watercress, rhubarb, and burdock. I consulted a friend who is a veterinary nurse about this product, and she advised that it was unlikely to hurt but also unlikely to help your cat either and that “anything labeled detox is probably b***s***” because “they don’t need to detox, they have internal organs for that.” While I wasn’t thrilled about receiving this particular product, it has been the only item we received in any box.

Every My Meow box also comes with a scratch pad that can be left inside the box or taken out to place around your house—all three of our cats love to scratch their claws on these.

How Do Subscriptions Work?

My Meow subscriptions work similarly to any other monthly subscription box. You can sign up on the My Meow website and give some details about your cat including their name, age, and preferences (if you have more than one cat you’ll have to pick one to be the recipient unless you’re signing up multiple times). Your first box will ship immediately and subsequent boxes will ship no later than the 25th of each month until your subscription runs out.

When you sign up, you will be able to choose your first box from any previous offering still available—as of the time of writing, I could select from the Fish and Chips, Meowsic, House of Mouse, or Hallomeow boxes, although the latter was showing as limited stock.

How Much Does It Cost?

The My Meow box costs £22.90 per month when paid monthly, and each box contains items worth over £40. You can also get discounts by purchasing longer upfront subscriptions; a six-month plan works out to £19.67 per box (£118 total) and a twelve-month plan works out to £18.75 a month (£225 total). You can also add an extra premium toy to your box for an extra £7.01 per month. All shipping costs are included. Every plan will auto-renew, but you can cancel at any time should you only want one box.

We have loved receiving our MyMeow boxes every month—my twelve-year-old son, in particular, is always excited to see that a new one has arrived so he can open it with whichever cat happens to be hanging around at the time. Every few weeks it feels like a mini Christmas as we open the box and see what goodies are inside it. The cats are always interested to see what’s going on, especially if they catch a whiff of catnip from inside, and at least once I’ve had to sit back from looking through the box as a cat climbed inside it to have a look around himself first! I have been generally very impressed with the variety and quality of the toys and other items we have received and all the treats have also appeared to be high quality—often from premium brands.

One thing I have found is that the number of cat toys in our house is now rapidly increasing! Once they have been out for a few days, the cats often lose their initial interest, so I have found myself considering putting some away to bring out periodically and keep things fresh. However, with the ongoing supply of new things every few weeks, I’m not sure when I would ever get around to actually bringing out some of the older items. We have a fairly large home, so the ever-growing pile of toys hasn’t been much of a problem, but for anyone living in a smaller environment such as a small apartment, you could quickly find your living space being overtaken by plush pumpkins and crinkly french fries. Many of the toys also make noises that can’t be shut off. One recent item was a strange feathery thing that made a very loud bird noise—not necessarily something you’d pick to have in your home if you don’t fancy being awoken by it at 3 am!

Another minor issue is that every box comes with around three different treat packets, so even with three cats, we found that we were also rapidly accumulating packs because we didn’t want to overdo it with treating our boys (two of whom gain weight easily). For a single cat household, you might quickly find a longer-term ongoing subscription overwhelming and end up giving some packs away to friends and family who also have feline companions at home—even with three cats we have already done this. When subscribing you can make some notes about your cat’s preferences, but if you have a cat who needs to lose weight or is on a very limited diet, then these boxes might not be the best choice for them.

Overall, we have all been impressed with the MyMeow subscription box—not least Marnie, Salem, and Artemis who are thrilled to have finally had some GeekMom review products of their very own to test out! I would highly recommend the boxes to any cat owner wanting to treat their beloved feline friends, however, I would perhaps advise only subscribing for shorter periods with a regular break here and there to avoid your home being completely overtaken within just a few months.

GeekMom received a subscription to My Meow for review purposes. 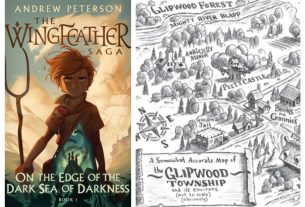 Searching for the Jewels of Anniera in The Wingfeather Saga 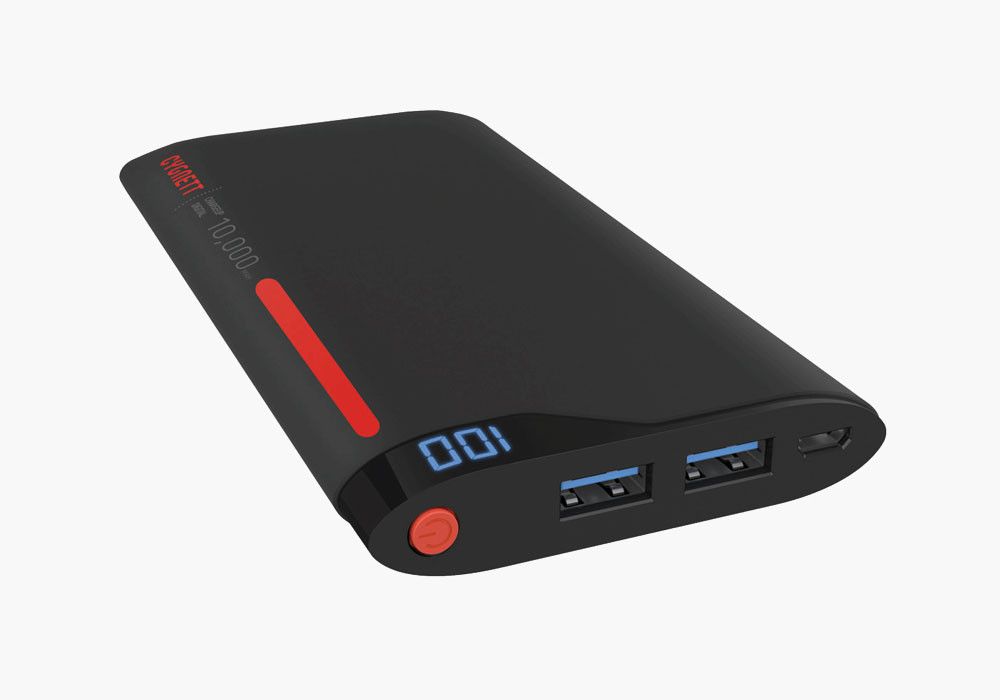