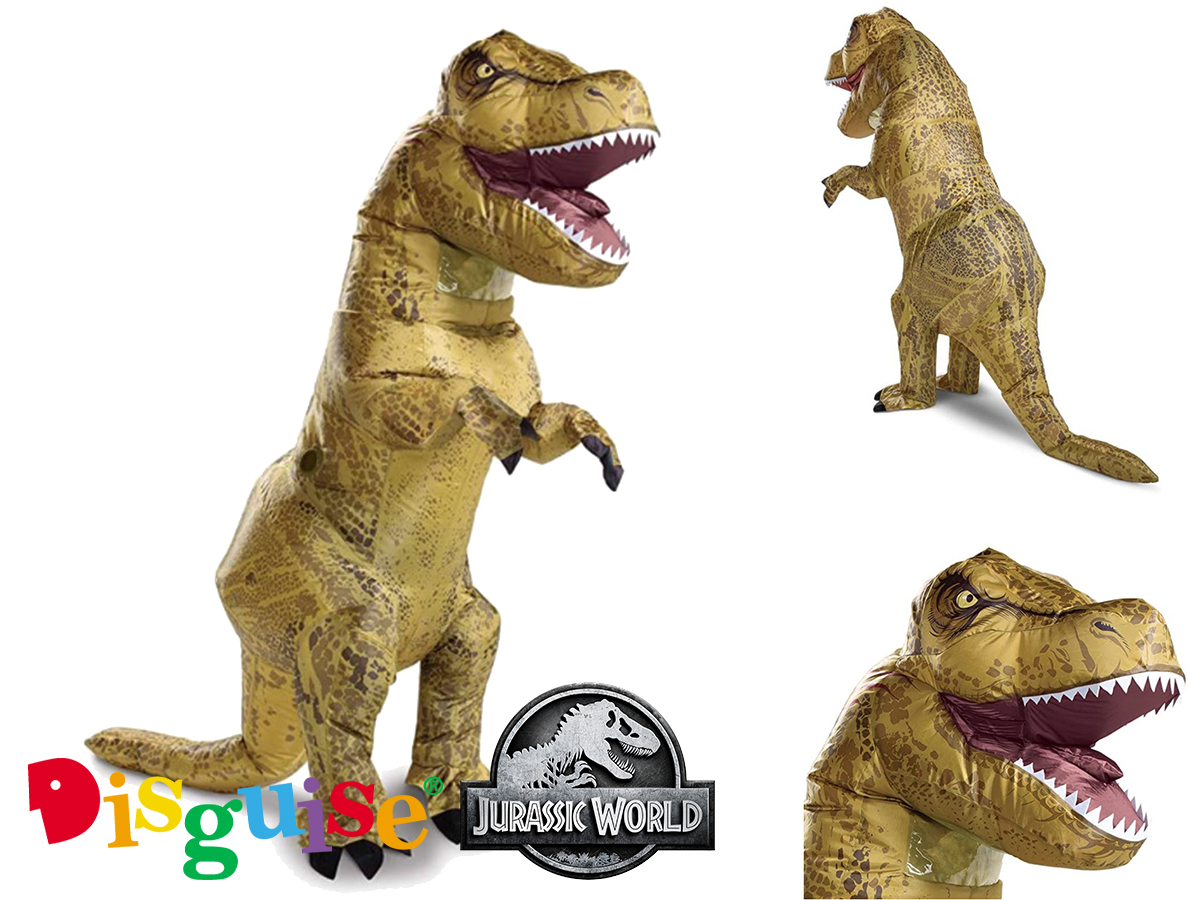 This year I’m doing a double cosplay for Halloween: Dopey from Fun.com and the fearsome inflatable t-rex from Jurassic World made by Disguise Store ($55).

This is my first inflatable costume and I’m impressed. It’s a high-quality costume and stays inflated when I’m walking around. The costume is a one-size-fits-most kind of thing but I found it to be a bit too small for my 6ft 2in son. He fit fine but he couldn’t see out of the designated viewpoints without using his arms to lift the costume up to his line of sight.

Get down with the Dino. #geekmomblog #jurassicworld #inflatable #dinos #dinosaur

I’m only 5ft 8in so when I put it on I found it easy to see out of and move around. My experience as a Walt Disney World entertainer had me wondering if an additional viewpoint out the mouth would have made it better for people that are taller.

The fan takes four AA batteries and is quiet. I could barely tell it was running. It’s not noticeable at all when you’re walking around.

For a quality test, my son took this on a walk around our neighborhood with our toy poodle, Bakster Stockman, and he said it held up very well. The only problem he ran into was the fan ended up being a bit weak. He said it started out strong, but he felt like the fan was weakening the more he walked.

♬ Who Let The Dogs Out – Original – The Doggies

The hands and feet both slip out of their respective areas and are covered by the attached gloves/covers. My son wears a size 13 shoe so it was kind of a bear to get his feet through it. He still fits though so that’s good.

It zips up in the back but there is a zipper pull on the inside of the costume to get in and out by yourself. If something happens and you need to open the costume a bit quicker, there is a velcro opening on the front near the chest.

There are a couple of things I’d like to mention that I found to be annoying.

First, is there are straps on the inside but no instructions with the costume as to what they are for. After reading some other reviews, I learned they are shoulder straps to support the weight of the costume instead of using your arms to do it. Second, the batteries don’t last that long so if you are going to a convention, you will need to take backups. The last thing is that the tail drags on the ground so if you are walking on a lot of concrete, you could damage it. I would recommend maybe putting some felt or other fabric on the bottom of the tail to protect it for longer periods of time.

Overall, it’s a fun costume if you are looking to join the ranks of the inflatable dinos at your local con or dance to music on TikTok. I plan on making many videos while messing around (my brother has a ring camera and I’m overdue for pranking him…). The inflatable t-rex is available in both adult and children sizes on Amazon.