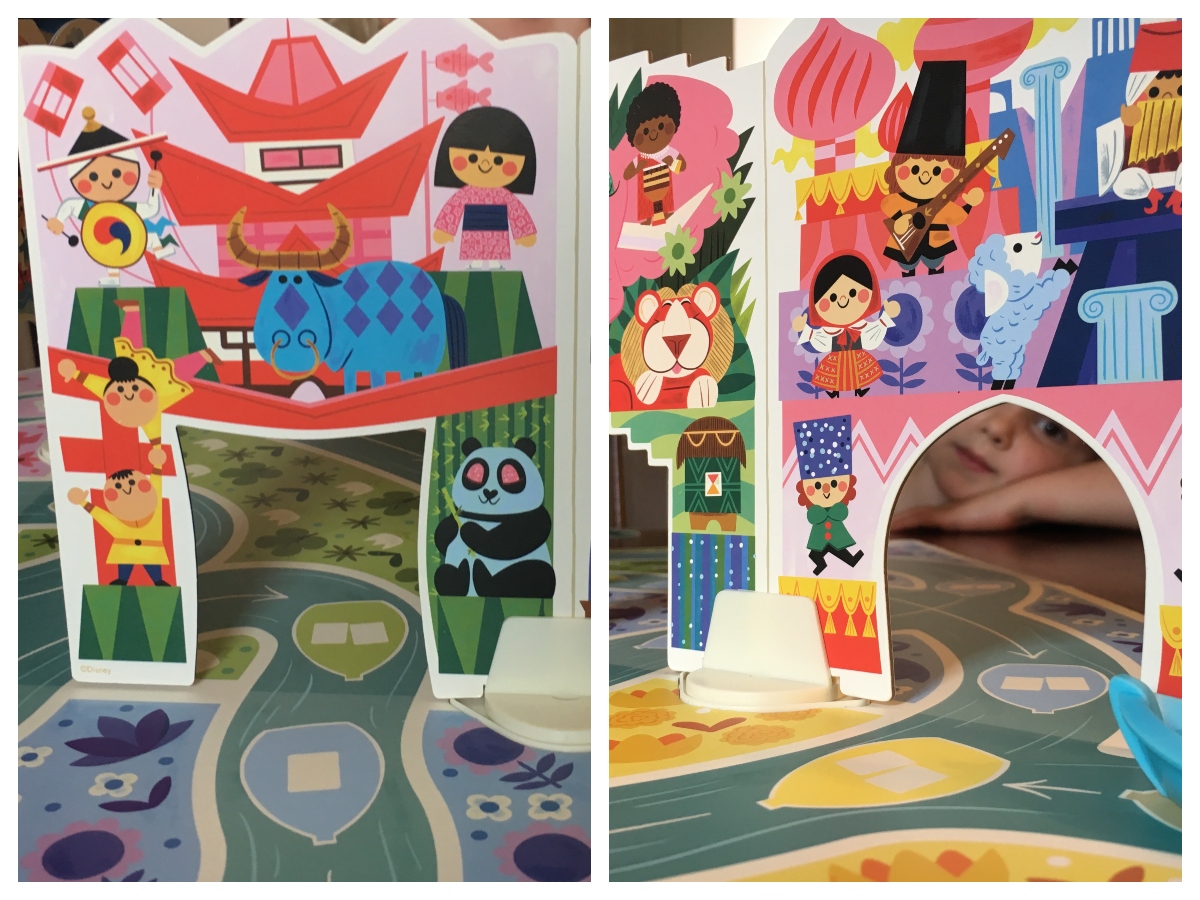 I remember traveling from England to Walt Disney World in 1992 and being exposed to the ride It’s a Small World for the first time. It wasn’t referenced in British popular culture the way it was in the States, but even then you could tell it was part of the zeitgeist. It has since been mentioned in so many movies and television shows, that it’s hard to think there was a time when I wasn’t familiar with the song… or with the small people. It’s a Small World is one of the latest properties to get the board game treatment from Funko, and I am all here for this recent trend of making board games from beloved theme park rides.

The game takes your boat around the board as if you were on the ride, and along the way, you and your teammates work to match your cards to characters from the ride. You can play two different ways: in the gentle mode, you are all on one team, or in the regular mode where you are on opposing teams. 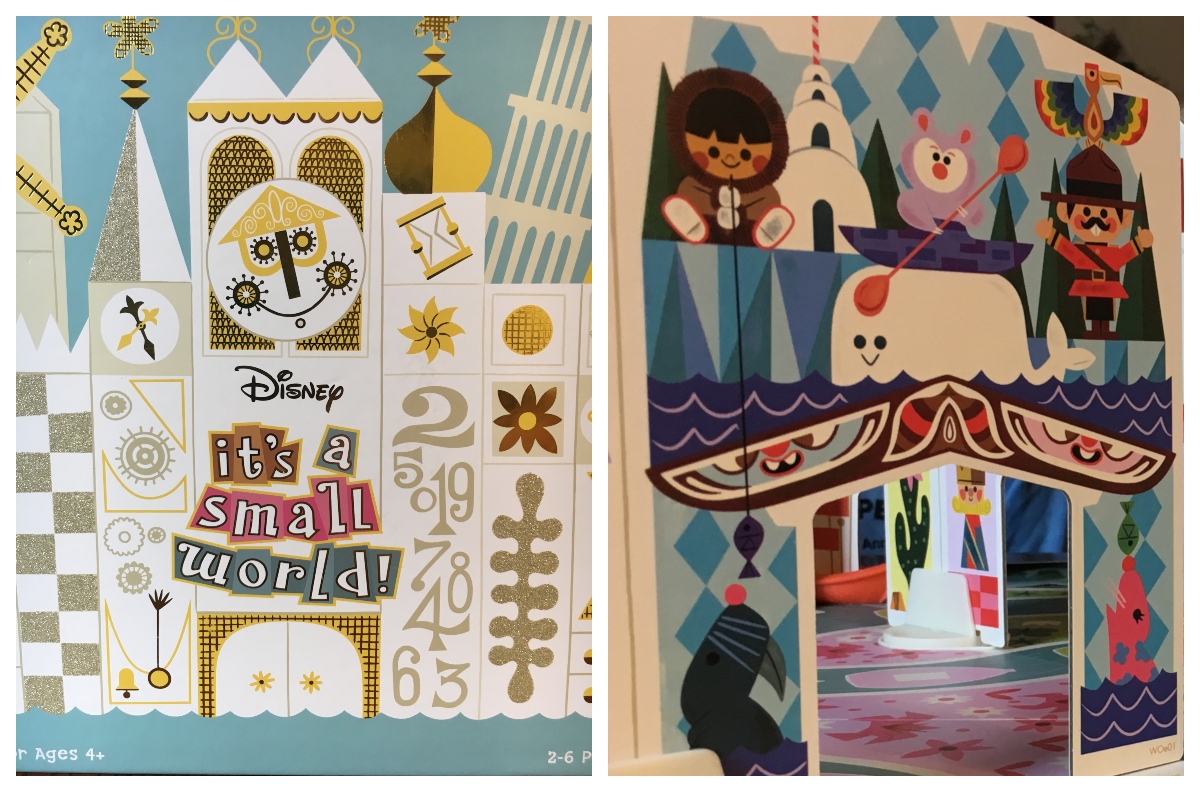 I do have to pause for a moment in appreciation of the box art. The muted tones of pale turquoise, a variety of creams, beige, and gold tones are beautifully placed and impeccably highlighted by the foil and glitter embellishments. The content of the artwork is as varied as the ride itself, with familiar icons such as the leaning tower of Pisa and a Dutch windmill, but also the iconography of the ride. I would be remiss not to wax poetic for a moment on the juxtaposition of the amazing typography, combined with such elements as cogs, seaweed, and flowers. This artwork was clearly a labor of love for the designers. The only extra pop of color highlights the word “Small” in the game’s title, for no purpose apparently other than to add to the pleasing aesthetic of the whole box. The construction of the game itself, the artwork on the board, and its pieces, live up to the hype of the box art. It truly is a beautiful game.

How to Setup the Game

The game board is three-dimensional and has a rotating aspect, so everything needs to be fitted together before you start playing. 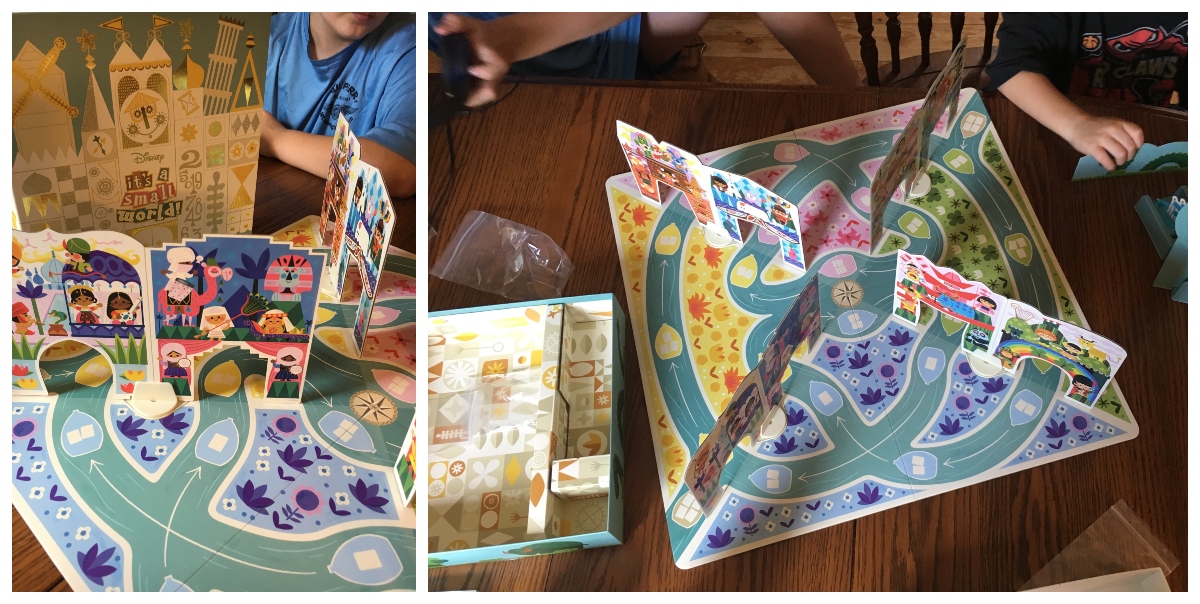 When complete, the waterway will be divided into four separate rooms in the same manner as the ride itself. The clock tower is a stand-alone piece and simply fits together with the card tray. As well as being able to play in gentle or regular mode, the game is set up so that you can play a short, medium, or long version of the game, built-in House Rules as it were. A standard (medium length) version of the game is to end the game when the Clock Tower wheel reveals the stars (number 6). The shorter version ends when you reveal the sunset (number 5), while the long version ends when you reveal the sleepy moon (number 7).

Before diving into gameplay, it should be noted that you shouldn’t let yourself be put off by the instructions. At first read through it feels like a complicated game, but within a few minutes of playing, the mechanics of play work themselves out. It’s more a problem with the way the instructions are written than with the gameplay itself. The game is basically an expanded matching card game, and it’s a lot of fun.

Each team starts with a boat and with four cards drawn into their cardholder. On your team’s turn, you move the boat one space and draw the number of cards printed on the space.

You then check to see if your cards have any matches in the room you are in. If any of your cards match any of the images in the room your boat is in, you place them in your team’s score tray. As the boats move around the rooms it becomes harder to see all the images in the rooms you are in. You don’t have to spin the whole board, but you can and it is much easier. As you move into a new room, simply spin the whole board so that the quadrant your boat is in is facing you. Once you’ve made your matches it is the next team’s turn. 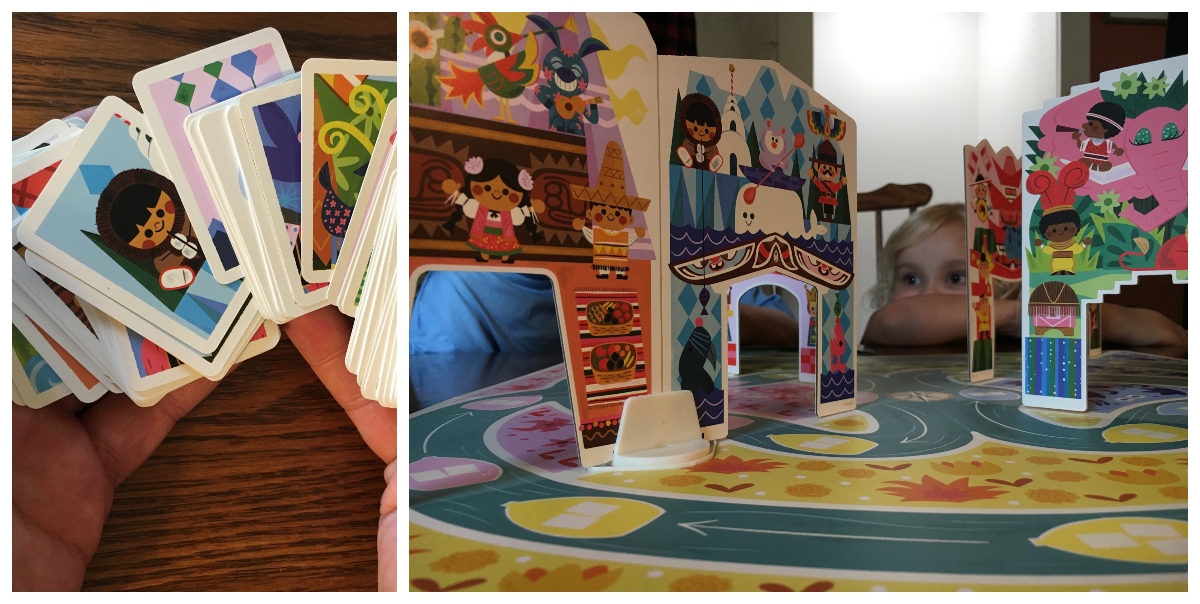 When everyone has taken a turn, you spin the Clock Tower to the next number.

When you draw your set number of cards, you will most likely get a character card to match against your scenery, but there are two special cards to help you on your journey. A Flip the Scenes card enables you to spin both of the walls in the room where you are in—spin the walls, not the board. You do not have to play this card immediately and can save it for a more advantageous moment, or even for a different turn. A Clock Tower card simply runs the clock down. Upon drawing it you must immediately spin the Clock Tower to the next number.

How to Win the Game

Depending on the type of game you have opted to play when you reveal either the sunset, stars, or moon, the game is over. Each team tallies up its score tray. Your score will include Clock Tower cards, Flip the Scenes cards, and Picture cards.

Should I Buy It’s a Small World?

If you have a pre-schooler and are sick of matching games, then this game is a great next-level game on your way to something more advanced. The game is designed for ages 4 and up, but I would definitely suggest parental involvement, especially if siblings are playing together. It can get quite chaotic, and so an older sibling or parent can be needed for smooth sailing. We have enjoyed a number of voyages on this ride, my five-year-old loves it, and I love the artwork more each and every time we play.

My middle-schooler did not agree with the artistic representations of some of the cultures, especially America. I asked what he would have used instead of cowboys and Native Americans, and he said he would have preferred skyscrapers, like New York City. Odd considering we live in the woods in Maine. We pointed out that this game was a very thin cross-section of the country, and that people from these other countries might also not agree with their depictions. It sparked a really interesting conversation about representation, historical accuracy, and about how we view other cultures from America. Though we all wanted to know why the Mountie would have bucked teeth! 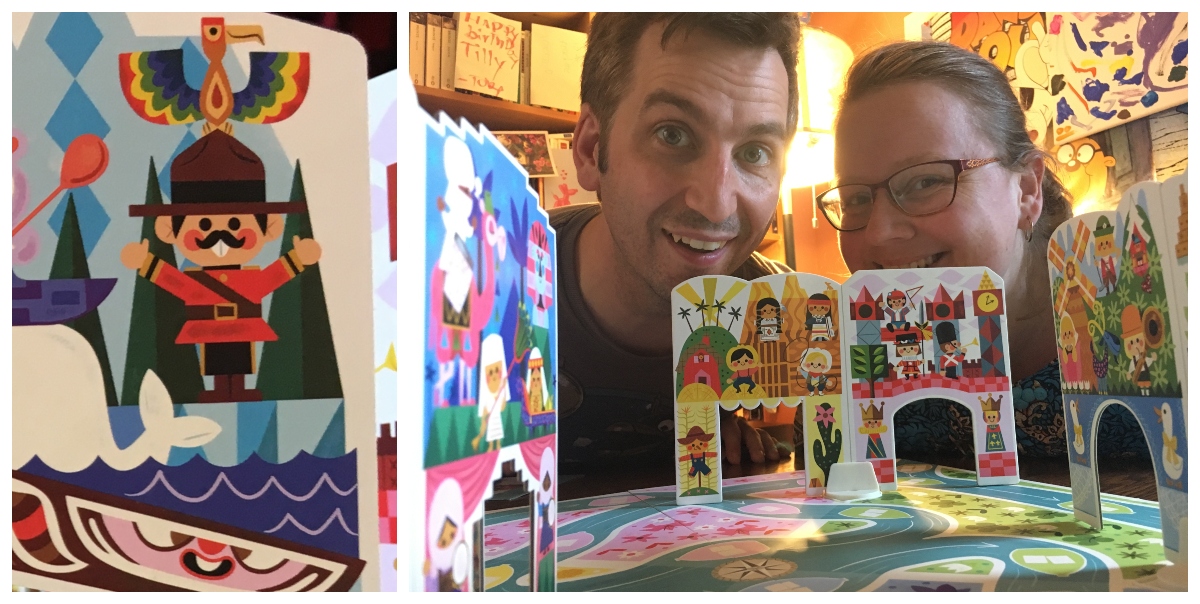 I found the whole conversation delightful, in part because I wrote my Bachelors’s dissertation on how Walt Disney contributed to shaping the worldview of Americans. Here I am twenty years later watching my son’s worldview get shaped by Walt Disney. It is a game in which exposure to other cultures is the whole point of the game, and for a gentle introduction to hard conversations, I was really impressed. The ride has struggled over the years, as politics and representations have changed, but as a conversation starter for young kids, it really does the trick.

GeekMom received a copy of this game for review.