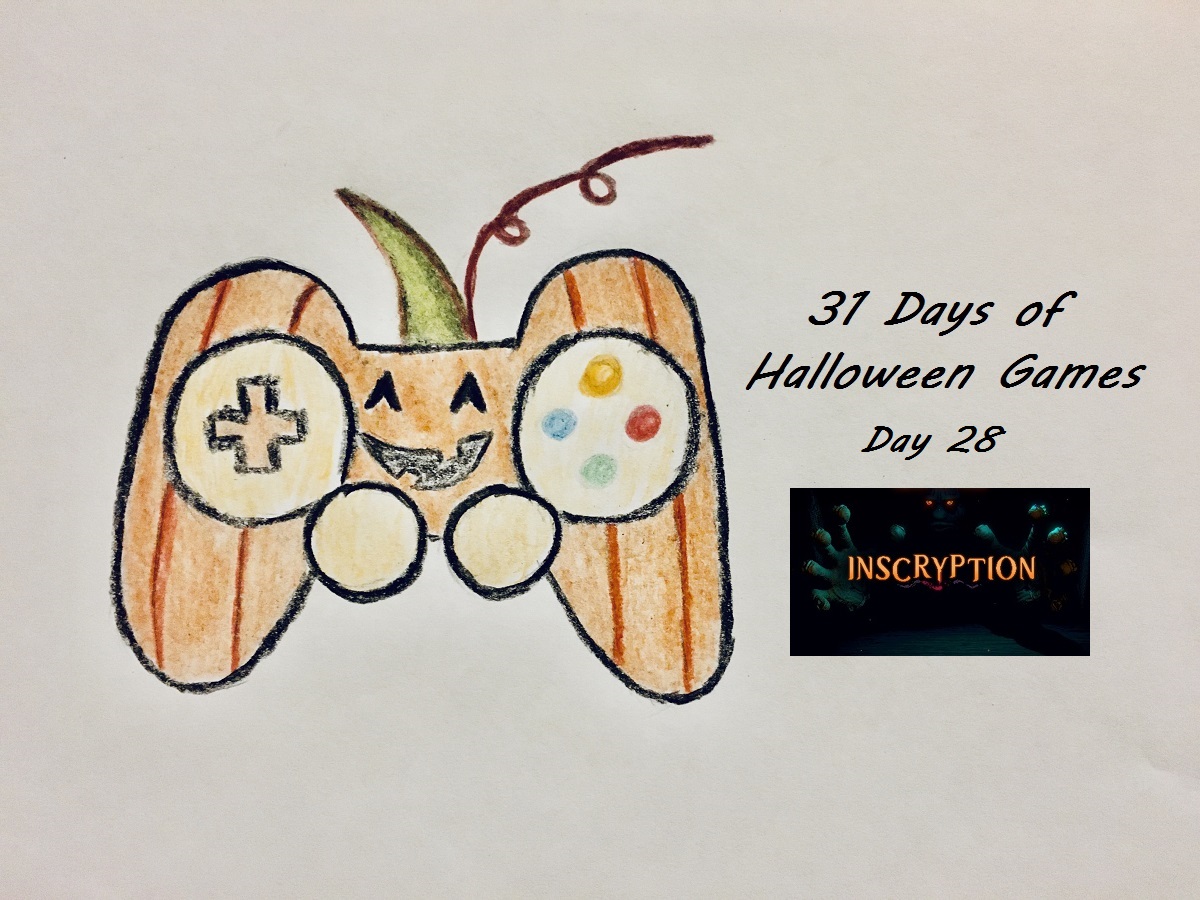 Are you up for a game of cards? Inscryption is a new card-based adventure game with super-creepy vibes for your Halloween nights. Be forewarned–it will draw you in, teasing you with its creepy forest narrative and haunting imagery. The cards will share their secrets but how they help is not always clear. And yet somehow, I can’t imagine a better way to spend my time on Day 28 of our Horror Game reviews!

To be absolutely honest, Inscryption was nothing like I imagined. The only hints I had were that it was a card-based game with a haunting story-based adventure. I refuse to give any spoilers in this review because I, like many reviewers on Steam, believe this game is at its best when you don’t expect anything. However, if you’re thinking of sharing it with the kids, I strongly recommend you play it first.

The game begins with a disc (remember those?) and suddenly you find yourself in Leshy’s cabin. Who is Leshy? A crazy old hermit with a deck of cards and a sacrificial game to play. There is nothing to see but his eyes and his creepy hands. How you came here or why you are even here are complete mysteries in a story that slowly unfolds both within the card game and around you. 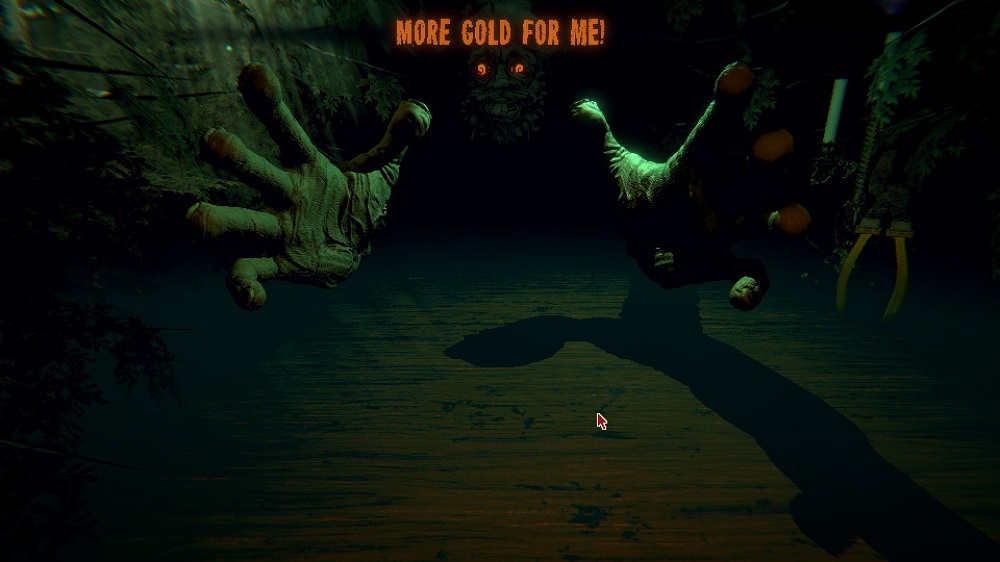 Inscryption is at least three games wrapped up into one. It is a card game played between you and Leshy with its own rules and twists. It is also a puzzle game as you explore the room, discovering new cards to play with and secrets to Leshy and his weird hobbies. And then there is the adventure-style map with its short narrative inserts. Meet the old lady with her wood carvings. Take a look at the pelts (no, really, you must). It all comes together with the story-telling; the hauntingly compelling narrative that creeps around the room, curling under your feet and dragging you down slowly into its dark dank depths.

Card Games with a Price

The card game is the centerpiece and the main game mechanic. I have seen some gamers compare this to Yu-Gi-Oh and Magic: the Gathering but it feels like something even more than that. The cards are made up of various creatures who are battling against Leshy’s own cards. Each creature comes with health, power, and cost. Some may also have additional powers, such as searching the deck. Each card can be placed in one of the four slots in front of you; some cards cannot be used until a blood sacrifice is paid (ie. another creature card). This doesn’t seem like a big deal until the Stoat card starts talking to you. 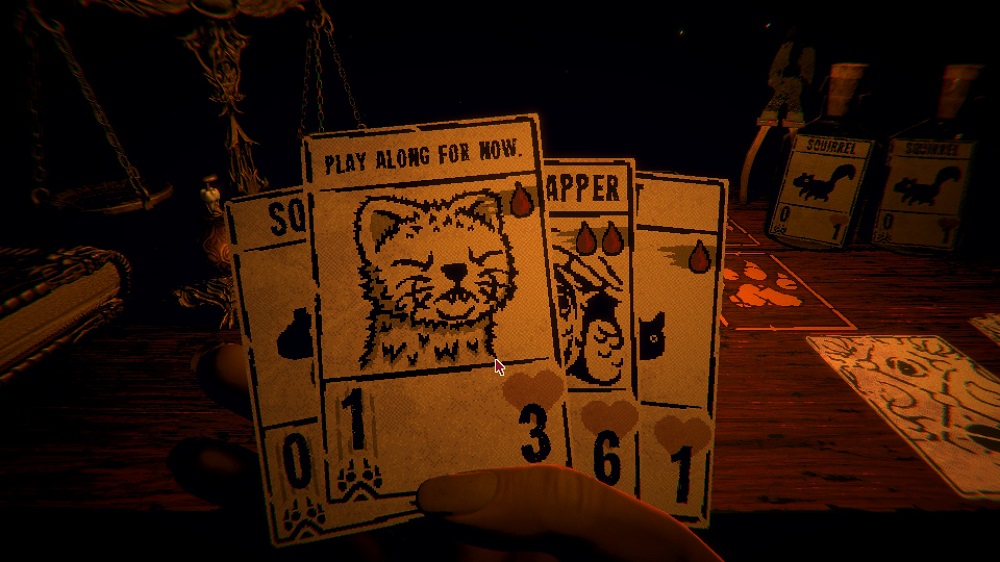 Stretch Your Legs and Explore the Room

The Stoat card is the catalyst for opening up the second part of the game: explore the room. Find the secrets behind why you are here (and how you will escape). I didn’t realize how important this element was until Stoat become rather assertive with its clues. I mean, he really wanted me to read the extra notes in the rule book. One clue leads to another, and eventually, a puzzle unlocks. The motivation for this particular quest is… The Stink Bug? A friend of the stoat’s and another clue in the story behind Inscryption. I’m not usually a fan of stink bugs in real life but with Inscryption, Stink Bug is the first of many insects and mini-beasts used in the game. I’ve gotta give full credit to a game that embraces the leaf-litter kingdom and turns it into a power play (for more creepy critters, check out my review for Webbed and the humble Australian Peacock Spider). 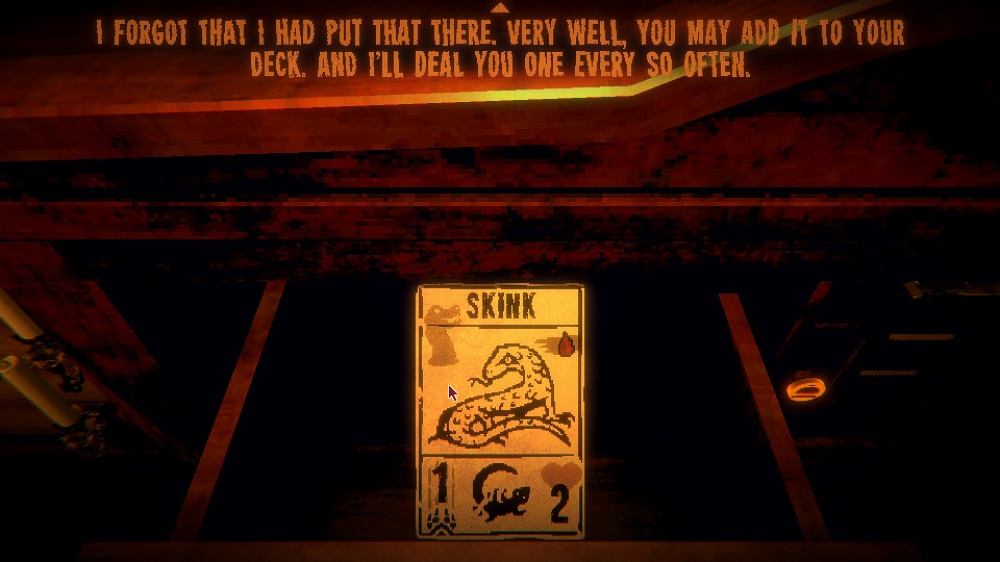 There is more to find around the room but it takes time balancing it with the other gameplay. What I really like about this setup is how independent the game elements are. They are each connected, which is nice, but they are not dependent on each other. You aren’t completely roadblocked while you decide which part to play right now.

Upgrade Your Cards with an Adventure

In between battles, you also have a map with its own adventure game taking place. Your wood-carved figurine is moving along the map with an assortment of tasks, quests, and people to meet on the way. Leshy reveals the map with a story, akin to a good ol’ ghost story. It’s creepy and it’s compelling but it is also a really smooth way of introducing certain choices along the way. For example, this time you can choose between adding a few items to your pack or you can risk sitting at the campfire with the hungry hikers. The campfire will imbue one of your cards with extra power or health but it also comes with the risk of being eaten by the hikers. 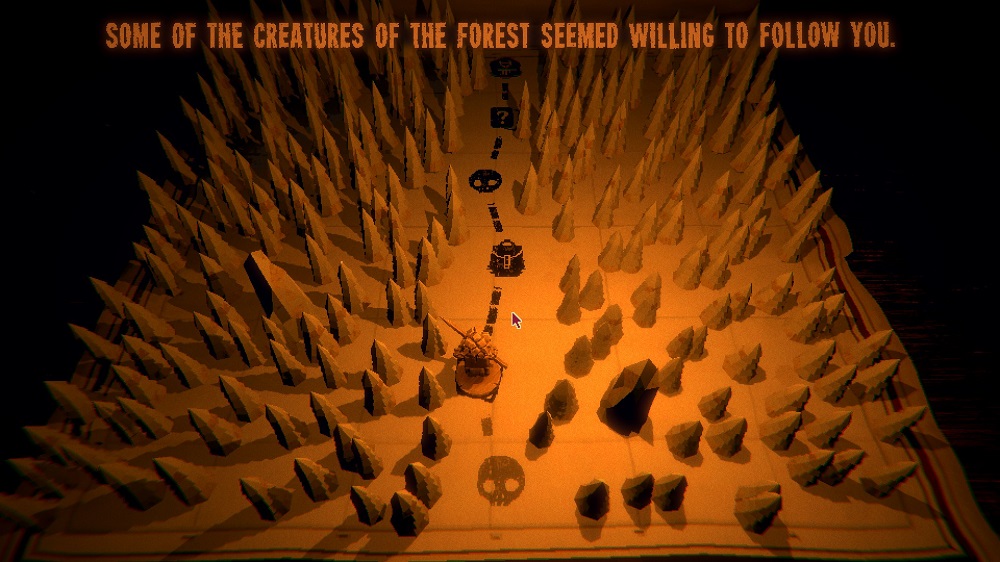 Take a Memento of Your Gameplay

As the game progresses, the challenges become stronger in both their difficulty and their temptation. I found myself wanting to sit and play for just a few more rounds. Let’s challenge the next boss and see if the Prospector will tear out my teeth again. Let’s check out the rule book again to see if there is another clue. The game absorbs you in until you eventually become another part of it. 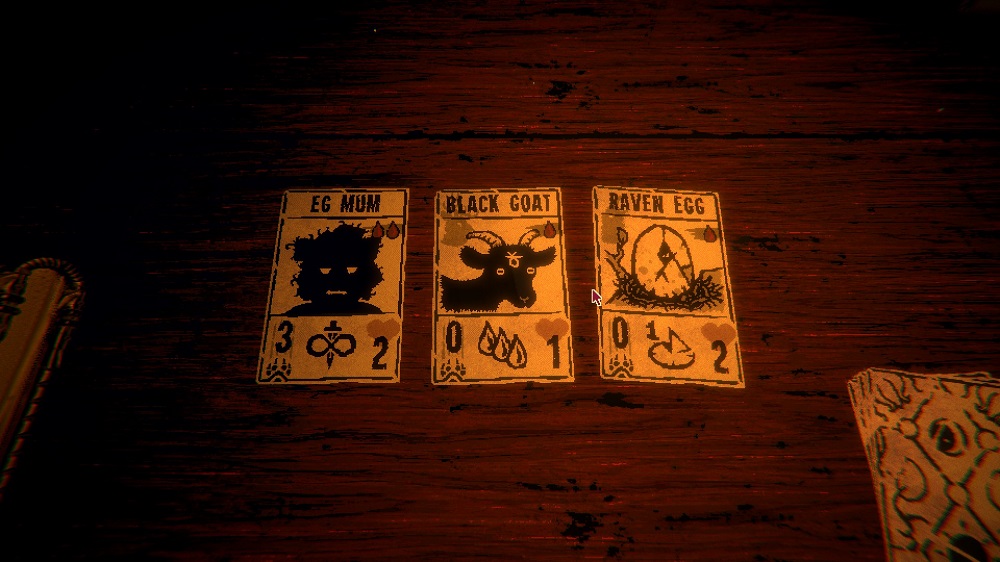 All of this would be good on its own but what makes this game truly great is the atmosphere it creates from beginning to end. Inscryption does not rely on the usual lighting gimmicks of many horror games. There are plenty of shadows, especially around Leshy, but there is also clear movement and detail in everything around you. The muted colors give the cabin-in-the-woods vibe and the soundtrack matches every creak and move.

Inscryption is a game designed to make you think but will reward you handsomely for doing it. This game has a confidence that belies its appearance; it knows it is going to haunt you into the night and you will come back for more. The card game on its own is fun to play; the story on its own is interesting. But when you bring it all together with a creepy horror puzzle room, you create a stunning game that is a true enjoyment to play.

Inscryption is available now on Steam, Humble, and GOG. There is also a demo available on Steam. Evil Genius Mum was given a copy of Inscryption for the purpose of this review; no further compensation was received. Check out the official website here.

Toshiba Encore Mini Tablet Is Perfect to Share, Take Along