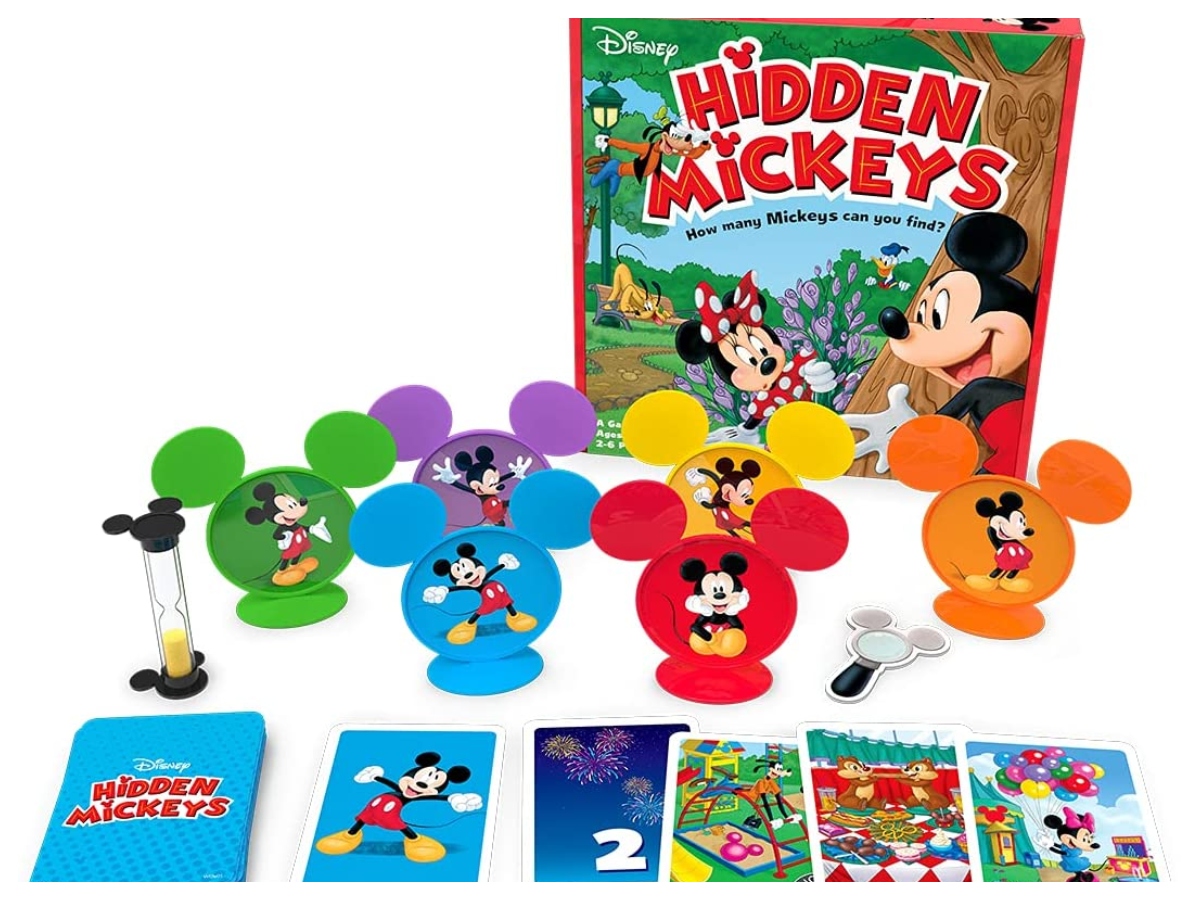 We have a wide variety of game players in our house right now. My eleven year old is currently having a bit of a moment with Exploding Kittens, but with him we can get away with games that can be high on intensity and comprehension. Our nine year old will join in with most things, while our five year old loses interest in most things! This summer, Funko released a whole range of games that cater to this need, with some great offerings for those in pre-K and early elementary years. Hidden Mickeys is one of a number of games that came out recently under their “Babysitter Approved” line. Meaning that a babysitter can walk in and play the game with no prior knowledge. This also works really well for grandparents who are a bit shocked when asked to play Risk: Godstorm at 7am.

All players take the Mickey Markers and hide them in the area you are playing in. You can limit that to the room you are in, or all over the house if you like. They are not hidden, however, and everyone should not only know where they but also try to remember which color is where. Mickey cards should be shuffled into a draw pile. The youngest player gets the Finder token and takes the first turn.

How do you play (and win) Hidden Mickeys?

On your turn, you flip over a card from the draw pile and do one of three things.

Play continues until all the Mickey Markers have been collected. Once the markers are all back, you tally up how many Hidden Mickeys each person has on their cards. Each card has between 4 and 7 Hidden Mickeys, and the person with the most Hidden Mickeys wins the game.

My kids jumped right into this game with nary a thought to the actual rules, and it got confusing fast. They all had a different idea about what they thought the game was, mostly erring towards simply hiding Mickeys and having the other players physically race around to find them. My middle child was severely disappointed upon learning the actual game was different, but he ended up enjoying the game anyway. So now we also have a firm set of house rules to play an alternative version of Hidden Mickeys.

Should I purchase Hidden Mickeys?

If you aren’t familiar with the concept of “Hidden Mickeys” in the wider Disney universe, then you might make the same mistake my entire family did, and assume that the hidden Mickeys in the game are just standees waiting to be hidden. In the actual game, the Mickey tokens are a fun part of the game, but the titular Hidden Mickeys are pictures on the cards. The box art doesn’t help, as it makes it look like the game is to look for an actual Mickey (who is hiding behind a tree), where in fact Pluto has found the real Hidden Mickey on the path. Hidden Mickeys are a well-known Easter egg of Disney animated films and theme parks, but my family apparently didn’t know that.

Even after explaining the concept to my kids (and to my husband, who likewise had no clue whatsoever), they are repeatedly conflating a Mickey that is hidden and a hidden Mickey. If you are not familiar enough with the Disney parks and wider universe to have a working knowledge of a hidden Mickey, then this game doesn’t make enough sense. I see the words “Hidden Mickey” and think of a Hidden Mickey, my family all saw “Hidden Mickey” and assumed it was a literal Mickey who was hiding.

The age rating is for 3-6 years old, and having played with a 5, 9, and 11 year old, I would say they hit that spot on. Unless you like running commentary that is all complaints, stick with the recommended age range. But here’s the deal: It’s a fun game, it’s a quick game, and it’s a nice gateway game if you have kids that aren’t as game-inclined as you would like. If you are a Disney junkie with young kids, it’s perfect; if you are merely Disney adjacent, it can get confusing.

App Review: All Aboard the Toca Train