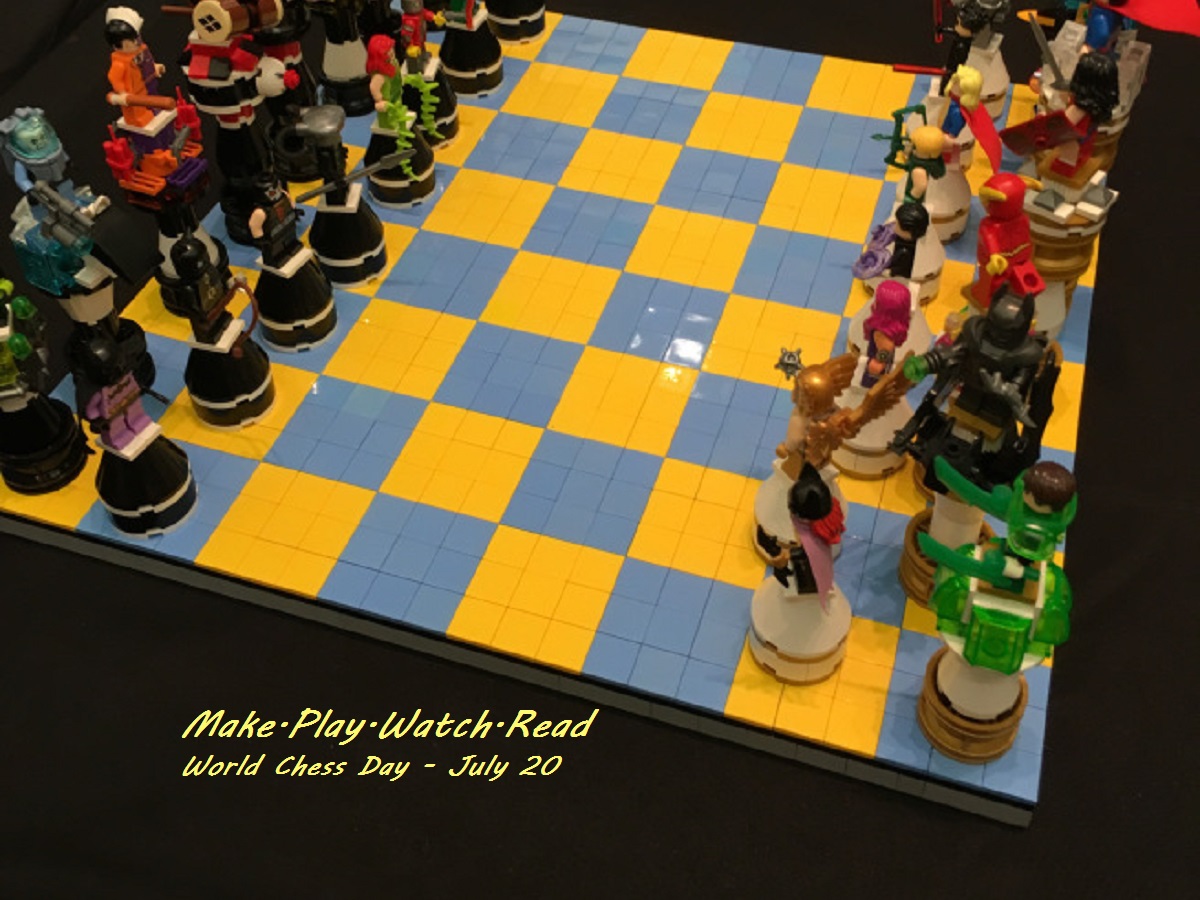 There are no less than four (4) different Chess sets in our home… possibly five if the spawnlings are bored and decide to makeshift one. It’s not that we are a chess-crazed family. On the contrary, I’m pretty sure it’s been a solid three months since I last had my butt handed to me by the 15-year-old, and I’m in no rush to repeat the humiliation. Except for the promise I made to play at least one game of Chess on World Chess Day, Tuesday, July 20. I’m pretty sure he will win again, however, I plan to celebrate the day with LEGO, movies, and reading time. Yes, we are back for Make/Play/Watch/Read: World Chess Day.

Chess is possibly one of the oldest internationally known tabletop games. Tabletop games have existed across many cultures for a very long time. (Check out the Samí games mentioned in our previous Make/Play/Watch/Read: Samí National Day.) World Chess Day is an international day recognized by the United Nations for the purpose of promoting global community and mental health through play. It’s worth reading their history and vision on the official World Chess Day page here.

However, there is something global about Chess, being easily recognized and playable all around the world. The current version of the game came out of Southern Europe sometime around the late 15th century, with older variations found in India and what was formerly known as Persia. To learn more about playing the game, read on to the “Play” section.

Make: Your Own LEGO Chess Set

As I mentioned earlier, we have a few Chess sets in the family. However, our kids were blown away when they were shown how easy it was to make their own LEGO Chess set.

Back in 2016, EG Family attended the local Sydney Brick Show, a grand exhibition of local creativity and some pretty nifty ingenuity. For us, the star of the show was Henry Pinto, winner of the Brickshow Newcomer prize and a soon-to-be buddy of the EG Family.

Henry was the first LEGO AFOL (Adult Fan of Lego) we had met at Brickshow who was eager to sit down and show us how he made his displays. And by the show, I mean he pulled apart his gorgeous Marvel X-Men LEGO Chess Set (of his own design), showed us the pieces he used, and then shared how it all went back together again. Henry was quickly promoted to fave LEGO Builder (sorry, Ryan McNaught and Nathan Sawaya), and we would seek him out at every LEGO event after that. We were super excited to see him in LEGO Masters Australia S1 and totally unsurprised to see him win with Cade Franklin. (PSST: They also have a LEGO book coming out next month, The Thrilling Adventures of Brick Dad—I’ll have a review up shortly but you can pre-order it here.)

ANYWAY, back to the Chess Set. If you want some tips and ideas, here is a video of Henry showing how to make his set (circa 2016).

The great news is you can make your own set easily enough from whatever LEGO or other toys you have sitting around. All you need are:

Make your own and share the photos on social media, tagging @geekmomblog and #WorldChessDay. We love to see what our GeekMom readers create!

Now that you have made your Chess set, let’s play! There are plenty of places to learn how to play Chess. To be frank, all of them are far better than anything I could muster here. The best of the bunch is Chess.com—as recommended by 15-year-old EG Sinister. He has been playing Chess every day of the Australian Winter School Holidays plus the additional lockdown period. I know, I know. There are worse things for him to be addicted to. And at least this one is free. 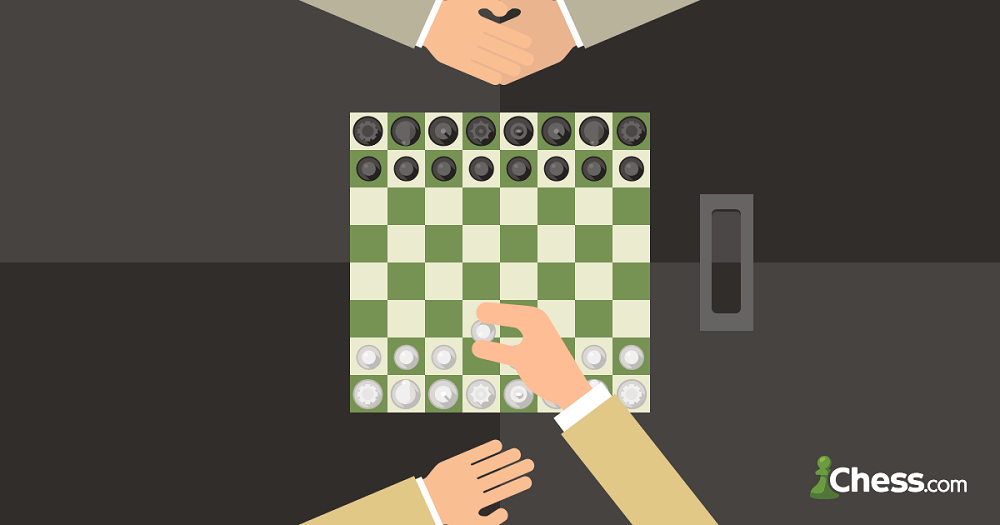 Chess.com has a fantastic user interface on the website, providing a launchpad for new players to learn and interact with others as well as challenges and competitions for more seasoned players. It is easy to sign up for a free account and then navigate around all of the offerings. Sinister has played various games with friends and random online players (always within a safe player environment). Through Chess.com, he has learned a wide range of special strategy moves with fancy names and history. There are also daily puzzles to test how quickly you can resolve a game within a set number of moves or from a particular attack.

Generally speaking, if you want to learn how to play Chess casually or competitively, you can’t go wrong with Chess.com.

There is a lot of misconstrued “status” that comes with playing Chess. It is still considered by many to be “The Intellectual’s Game,” and often with the snobby preppy upper class. And I say that’s a load of rubbish. Chess is a game accessible to everyone and takes absolutely no special resources to learn (refer back to the “Make” section above). This misnomer is exactly why I love to watch movies featuring the underdogs of Chess. I want to see people from every walk of life overcoming the ridiculous hurdles of other people to show how awesome they are at playing Chess.

Because Chess is a game of strategy and not status.

The perfect movie for this is Queen of Katwe (available on Disney+). Sure, there is a plethora of movies about Chess, but Queen of Katwe has this unbelievable strength and charm. Based on a true story and set in Uganda, it stars Madina Nalwanga as Phiona Mutesi, a 10-year-old girl living with her mother (played by Lupita Nyong’o) and younger siblings. Phiona meets Robert Katende (David Oyelowo) at a missionary program, where he offers to teach her how to play Chess. Phiona displays a natural ability with the game and her curiosity drives her to learn more and more, with the ultimate goal to become the top player in the group and escape the poverty of her hometown.

Queen of Katwe captures the dichotomy of living in Uganda while studying and training for chess tournaments. I mean, that’s not exactly a career path you would usually associate with Uganda, and yet it is the perfect opportunity for Phiona. This is her story and her life path. A reminder to all of us about the value of games like Chess and the importance of supporting our children on their own life paths.

Read: Through the Looking Glass and What Alice Found There by Lewis Carroll

15-year-old EG Sinister doesn’t believe me, but I learned some of my Chess strategies from reading Through the Looking Glass and What Alice Found There by Lewis Carroll. I kid you not. The book opens with a chess problem. My great-grandmother tried many times to convince me there were strategies for Gin (the card game) hidden within the pages of Alice’s Adventures in Wonderland, but since I don’t play Gin, I never noticed. Yet the chess moves and ideas simply jump out of the sequel for me. It is still one of my favorite books to read at the ripe age of 40-something. 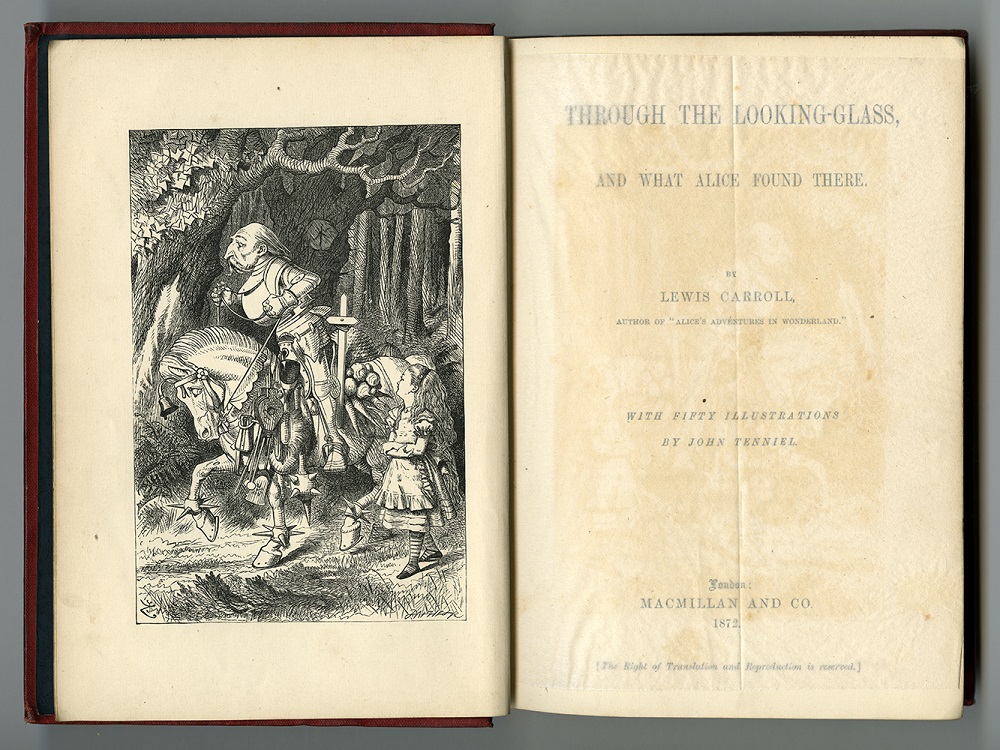 Through the Looking Glass is the direct sequel to Alice in Wonderland, following the dream-like adventures of young Alice. This time, she is stepping through the Looking Glass in her family’s sitting room, ever so curious of the world that exists beyond. In this new world, everything is the same but reversed. It looks the same but it acts differently. Running super fast on the spot helps you remain stationary and resist movement. Walking away from something ultimately brings it closer to you. Chess pieces are brought to life with the most detailed characters and story arcs.

At the time of publication, Carroll’s chess problem and subsequent solution (as detailed within the story) caused great frustration for chess players. Many considered his solution to be impossible if you follow the traditional rules and not with your own “house rules.” Some even accused Carroll of using as much creative license with the game as he does with the rest of his writing. Carroll simply replied with a preface to the 1896 edition:

As the chess-problem… has puzzled some of my readers, it may be well to explain that it is correctly worked out, so far as the movies are concerned. The alternation of Red and White is perhaps not so strictly observed as it might be, and the “castling” of the three Queens is merely a way of saying that they entered the palace; but the “check” of the White King at move 6, the capture of the Red Knight at move 7, and the final “checkmate” of the Red King, will be found, by anyone who will take the trouble to set the pieces and play the moves as directed, to be strictly in accordance to the laws of the game.

To be honest, the beauty of Through the Looking Glass is in the skillful storytelling by Carroll to bring a traditional game to life. There is something magical about setting up the chessboard and playing out the moves while reading the story, seeing the pieces move across the board and show their little characteristics.

Chess is a game of strategy and wit, of foresight and imagination. It is can be played by anyone willing to learn the basic moves while allowing room to grow into mastery. If you haven’t tried it before, World Chess Day is the perfect opportunity to give it a try. And if you’ve been playing for years, keep an eye out for me on Chess.com. Your move. 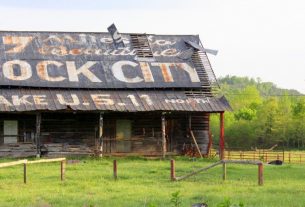 Billboarded to Death: Adventures on a Road Trip

Our B-17 Weekend: Time Travel Does Exist

A New NEW Generation of ‘Care Bears & Cousins’ From Netflix