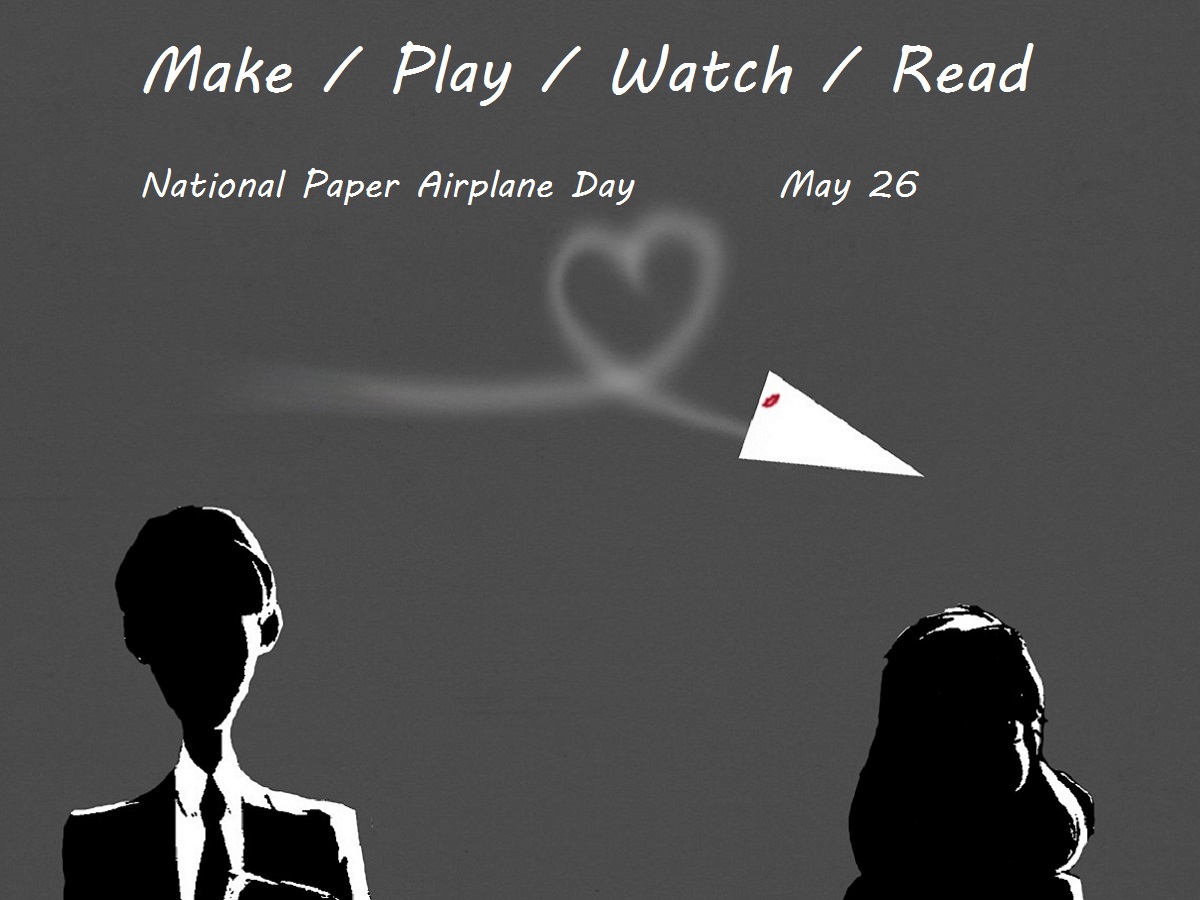 When was the last time you threw a paper airplane? Those nice smooth creases, using your thumbnail to make it just right. Turning up the edges to create some form of a flap and pretending to know what it does. (Don’t lie, you know you did it too.) Adding a little more detail to the nose, despite the fact it will be smoooooooshed within the next 3-minutes. Throwing the single piece of hopes and dreams into the air, hoping it will glide, even if only for a few seconds. It is one of the simplest symbols of childhood, and, yes, it even has its own unofficial national holiday (May 26). Naturally, we need to celebrate the paper airplane. Whether it’s your first or your 50th, it’s time to Make/Play/Watch/Read and Throw your paper airplane.

There are some people who have their own special design they swear will be the best/fastest/furthest/trickiest paper airplane ever. I, too, have my tried-and-true design. If you have never made a paper airplane, then this is the best place to start. All you need is an A4 piece of paper. I suggest lightweight paper works best for this design, as there are multiple folds that can make heavier paper/cardboard even more cumbersome.

Check out my throwing skills on Instagram with @evilgeniusmum and @geekmomblog, or tag us in your own efforts!

If you like the meditative peace of folding your own paper airplane, you are going to love this casual game. The Call of Paper Plane was officially released on Steam in January 2021, however, early-bird copies were available during 2020 (and greatly appreciated). It is the kind of game that doesn’t offer too much and doesn’t expect too much of you either. It is peaceful, explorative, and quietly adventurous in the same manner as the paper airplanes it features.

The game centers on the adventurous nature of a simple paper airplane. You, as the player, can explore and experience the sense of travel as you fly through cities, parks, forests, and seasides. You can choose between Leisure (fewer obstacles, animals, and more casual play) or Hard (more challenges and curious animals to distract you). You control the paper airplane through the W-key and the S-key. The W-key gives you lift and slows you a little, while the S-key sends you down with a bit more acceleration. Along the way, you can pick up paper balls to unlock extra features. Once you complete each level, you can stamp your travel book and continue exploring.

The mechanics of the game are very simple and soothing. While it may not be exciting enough for my teenager, my younger kids (12yo and 7yo) liked the casual gameplay. Zaltu especially liked the soft adventure and curiosity with the game. Personally, I am really missing travel at the moment (due to COVID and border closures in Australia). While this isn’t the most adventurous travel game I have ever seen, its relaxing nature reminded me of previous holidays where I simply wandered around town. I miss that.

Anytime someone has mocked my love for paper airplanes, I usually laugh back at them. “You have no imagination! No sense of creativity or joy or simply curiosity. You have no heart.” Paper airplanes are the most simple expression of our romantic side.

Back in 2012, Paperman was released as the short film to accompany Wreck-It Ralph. To be completely honest, I enjoyed Wreck-It Ralph, but I was blown away by Paperman. It stayed with me for a long time after I left the cinema. I wasn’t the only one; Paperman was raved about by critics and went on to win an Academy Award for Best Animated Short Film, the first Disney short to win since 1969.

This film is short, sweet, and evocative. It is only 6-minutes long and presented in a black-and-white blend of traditional and computer animation (with a signature red highlight here and there). It is the story of a man who chances a brief meeting with a woman at a train station. Before he has the chance to act, she has already gone on the next train. The man is saddened for this missed opportunity… until he chances another sighting in the building across the street! But how can he gain her attention? The only thing he has is a stack of paper on his desk…

It’s corny and hopelessly romantic, but it captures all of the innocence of folding your own airplane. In six short minutes, we are taken into a story filled with hopes and anticipation. There is a sense of excitement and believing this will happen but not knowing exactly how. This is everything I love about throwing paper airplanes… and yeah, I’m a little romantic too.

Now, I know this book is the novelization of the movie with the same name—Paper Planes. The movie came first. Well, kind of. Because the real-life story came first. Then the movie. And then the book. Why am I suggesting you read the book? Well, I’m actually suggesting your kids read the book as it is really well-written for younger kids (let’s say around 10 years). The movie is a great motivation for grabbing a piece of paper and folding your own paper airplane but there is something about the book that encourages kids to go and read more.

Paper Planes is based on the true story of Dylan Parker, an Australian who competed in the 2009 World Paper Plane Championship and placed third for Distance. That’s about it for the true story part because the movie/book still features Dylan but a lot younger. Like, 10 years younger.

The book has Dylan as a 12-year-old boy, living in outback Western Australia with his dad. Like his real-life inspiration, this younger version loves paper airplanes. He simply loves to design, create, and throw paper airplanes. When his design breaks the World Record for distance, it is the beginning of a journey to the World Paper Airplane Championships. The innocence of the storytelling is held together by Dylan and his genuine love for paper airplanes. Younger readers can relate to his character and the sincerity he gives equally to both friends and paper airplanes.

It would be easy to include Paper Planes in the “Watch” category for this article, but, honestly, there is something extra for kids when reading this. There is far more depth revealed in the book, allowing readers to empathize with Dylan’s passion. The story connects with the reader and allows them to fold up in their paper airplane and soar. The movie is a great story for inspiring us to fold but the book is a better story for helping us understand why it is so much fun.

Paper airplanes are simple to make and easy to develop into your own personal design. You can use recycled paper, and you can recycle them after you finish playing. You can make it competitive or casual fun. They are whatever you want them to be and they are yours. This Wednesday, grab a piece of paper and appreciate how beautiful a nice neat fold can be.

Prepare Kids For The Zombie Apocalypse With Zach Meets The Zombie