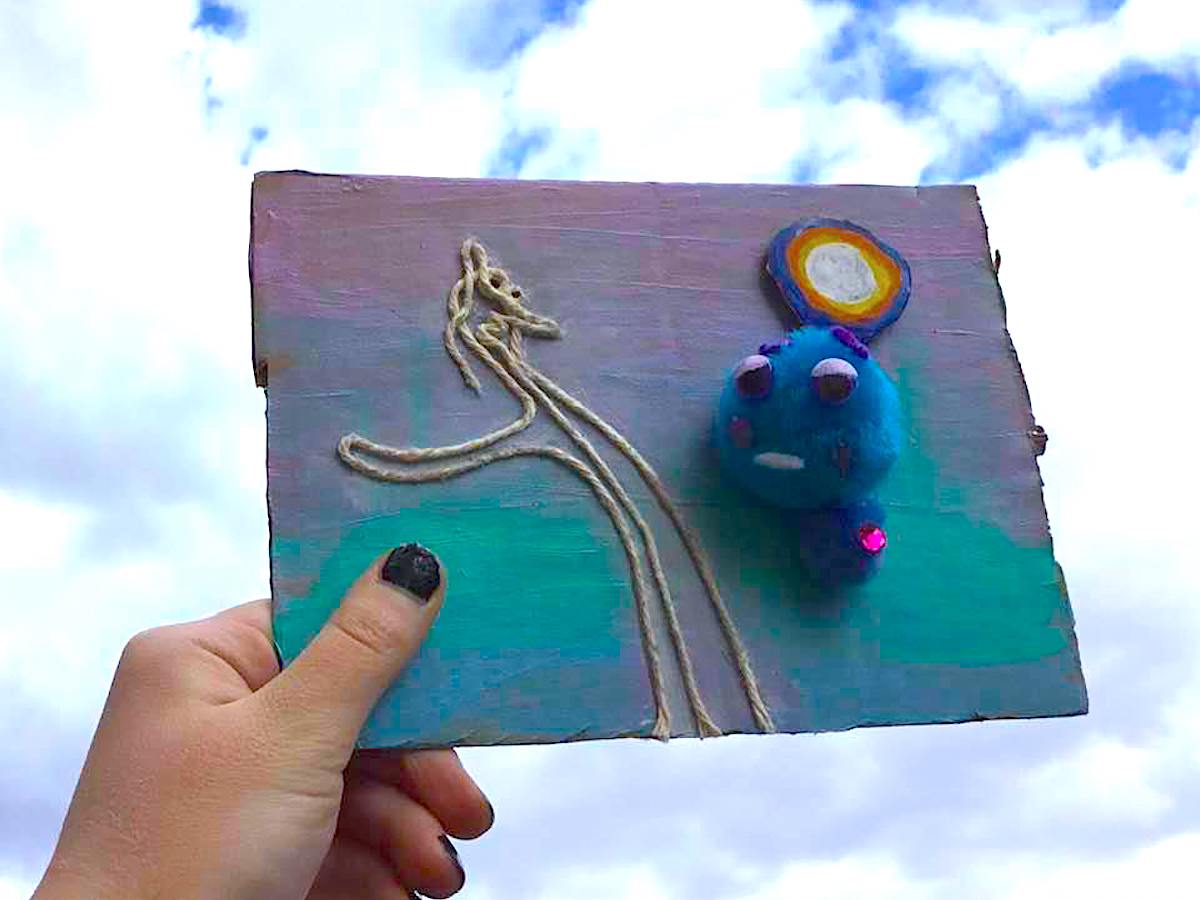 The morning after the Oscars are held, I check the entertainment news to see who won only one category, “Best Animated Feature,” and this year Pixar’s Soul gave the company another trophy for a feature film release.

One of the things that I loved about this film was the blending of Pixar’s clean, computer animation style with what looked like some mid-century style line character drawings.

In honor of the big win for Soul this year, here is a fun little kid-friendly, Soul-inspired collage using upcycled materials.

First, find a nice piece of cardboard and paint it with some “cool” colors, like blues, purples, greens, or pinks. Check out my post on “cutout silhouette” postcard prints on a fun way to blend colors.

For the “souls” themselves, Docter said the look comes partly from a material called “aerogel,” the lightest material on Earth. Since we don’t have that, we’ll use something much easier to find, pom poms and some googly eyes, to make a little soul.

Use one large and one small light blue pom pom and glue them on the painting. Glue the googly eyes on the larger “head” pom pom.

To add more details, make a mouth from felt or place a small rhinestone or felt dot on the “chest” area. Dab a small bit of pink paint on the face for the “cheeks.”

This line style, Docter said, was partially inspired by the early 1900s style of Pablo Picasso’s cubist experiments in taking a three-dimensional form and making all sides visible on a two-dimensional surface. One artist on the Soul team also came up with the idea of bending wire in the character shapes, then projecting the shadows on a wall, as a guide to how the characters will look. Very cool.

Personally, I also saw the fun line style of the jazzy 1940s and ’50s UPA (United Productions of America) Animation Studio projects, like the type used in the classic cartoon Gerald McBoing-Boing.

For our purposes, there’s really only one easy way to make a cool, curvy, squiggly line for a collage: string!

Use just white yarn or plain old packing string for this one.

Draw the character you want (lightly) on the background surface, and little by little, glue the string over the design. Tacky glue works best for younger crafters, but I used a glue gun. Once finished, take a small black paintbrush and fill in the “eyes,” then lightly dab some white or light pink or blue paint inside the line image to give it a glow.

My collage features 22 and the Jerry B, but do any favorite characters you want, or design your own.

Finally, if you want to add the cool, hand-painted looking style of the movie’s title logo, find another piece of cardboard, and simply paint the “O” on it with acrylic or craft paint. Stick it on the collage with a piece of double-sided mounting tape. You can do the whole logo if you want, but I really like the way the sunny “O”  looks floating on its own.

There it is! An easy, kid-friendly collage with a lot of color, a lot of character, and most importantly, a lot of “soul.”

Try This At Home: The Hollow Face Effect