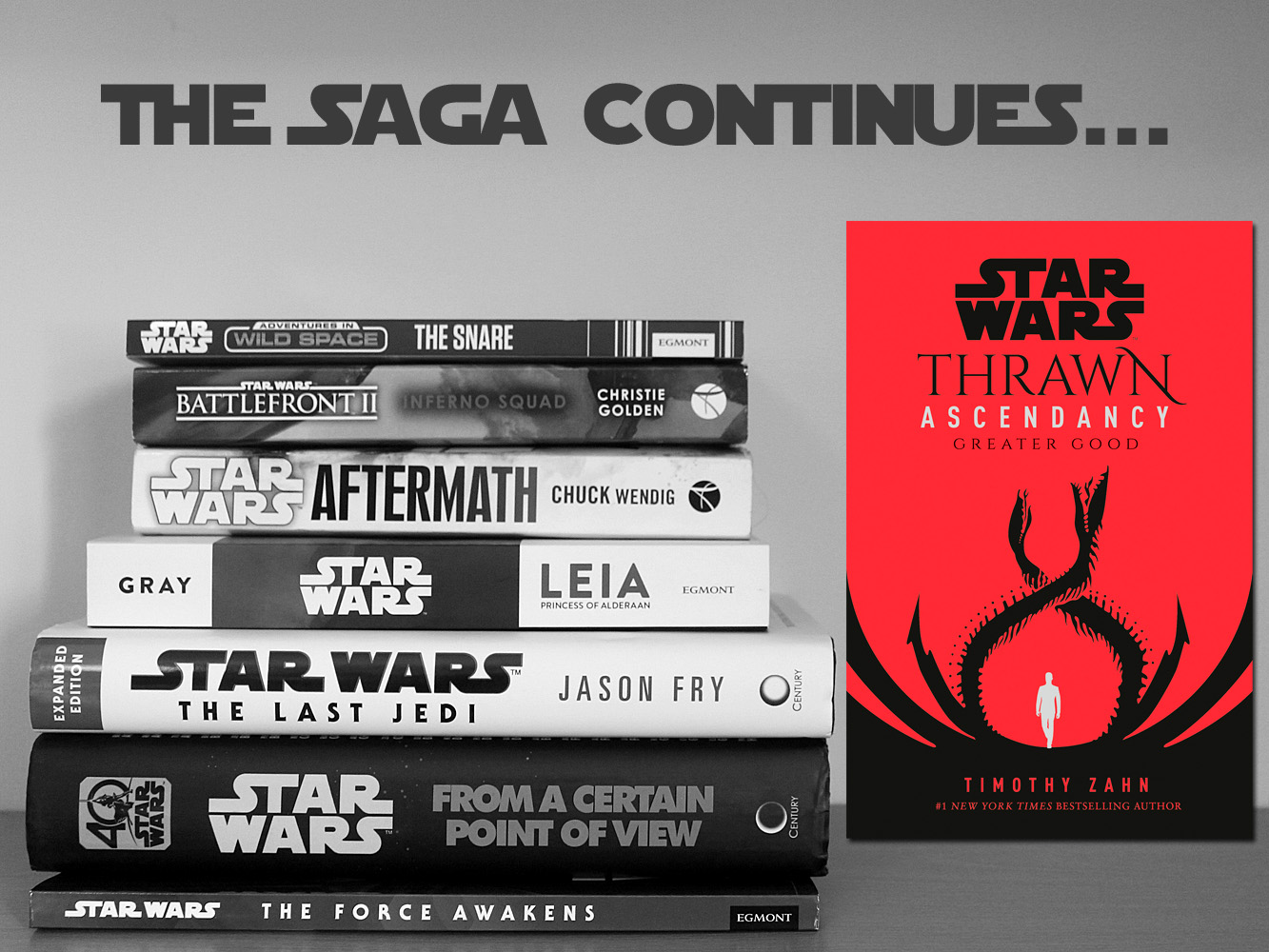 Timothy Zahn’s second Thrawn trilogy of the new canon continues today with the publication of Greater Good, book two of the Ascendency Trilogy. Those familiar with the Thrawn novels will know what to expect here, but Zahn has pulled off a brilliant story that has instantly become my favorite Thrawn novel so far.

Please note: This post contains affiliate links. Spoilers from the previous Thrawn books are ahead.

As with every Thrawn novel, there’s a lot going on in Greater Good right from page one with dozens of characters and multiple interwoven plots happening over different points in time. The book picks up shortly after Chaos Rising with the Chiss looking to mop up the final remnants of the Nikardum after their defeat of General Yiv the Benevolent. Meanwhile, a situation arises involving a group of refugees from an unknown world torn apart by a civil war that, we quickly learn, was manufactured by external forces.

Closer to home—or the Chiss homeworld at the very least—inter-family politics remain at the heart of everything. Thrawn’s continuing reputation has endeared him to many but also won him plenty of enemies who would like nothing better than to see the skilled tactician brought down. When an unbelievable new opportunity presents itself to some low-ranking officials, they can’t believe their luck, but who exactly is being led astray, and to what ends? Given Thrawn’s difficulties navigating the world of politics, could this be the blind spot his enemies need to take advantage of?

Before the end, all the many threads throughout this story will be pulled together into a conclusion that will test Thrawn’s military genius to its limits, but with the future of the Chiss Ascendency itself on the line, it’s more vital than ever that he finds a solution.

If I’m being entirely honest, I’ve never been a huge fan of the Thrawn novels. They’re dense, heavy tomes filled with what can feel like an excessive number of characters, plots, and other factors that I find hard to keep track of. Unlike many of the other Star Wars novels, these ones feel like work to get through, and I never found the payoffs worth that amount of effort. Greater Good started out that way too—any book that opens with a “Dramatis personae” list along with a reference guide to political and military ranks is never going to be an easy read—but somewhere along the way, something changed. By the time I reached the end, I was racing to find out what was going to happen next and actually finding myself excited for the next book in the series, something that had never happened with a Thrawn book before. Greater Good has even made me want to go back and read the previous books!

I think this might have something to do with the book’s tighter focus. While there is still a whole lot going on here, the narrative also felt neater and easier to follow. The flashback sections are cleaner and work well to build tension by revealing small fragments of the larger story piece by piece, and even with multiple plots happening at the same time, it somehow felt as if they worked together better than ever before—I could see where things were going and was both eager and nervous to see how they played out.

There were still a few negatives, of course. Some of the political string-pulling early on still felt confused and difficult to follow, perhaps multiple read-throughs are required to fully appreciate exactly what is going on but not everyone has the time for that? I expect these threads to reach their conclusion in the third and final book given what we know of Thrawn’s situation in the later trilogy so there’s also little in the way of a satisfying payoff to be found here. The Chiss naming conventions continued to make following the story more difficult than it needed to be—but at least they allowed me to check off the “book with a character whose name I can’t pronounce” prompt on one of the reading challenges I’m participating in this year! Finally, I still find it difficult during the times when I find myself rooting for Thrawn and even liking him a lot. It’s hard to reconcile this rather genial, at times naive, figure with the vicious and even cruel Thrawn I first came to know through Star Wars Rebels.

Greater Good took me by surprise. I was expecting to have to power my way through this one as with all the previous Thrawn books in the name of keeping up-to-date with the ongoing canon, but instead, I found myself genuinely enjoying it and looking forward to the concluding part of this story arc. I hope that the final book of the trilogy—Lesser Evil coming out in November—will keep this up.