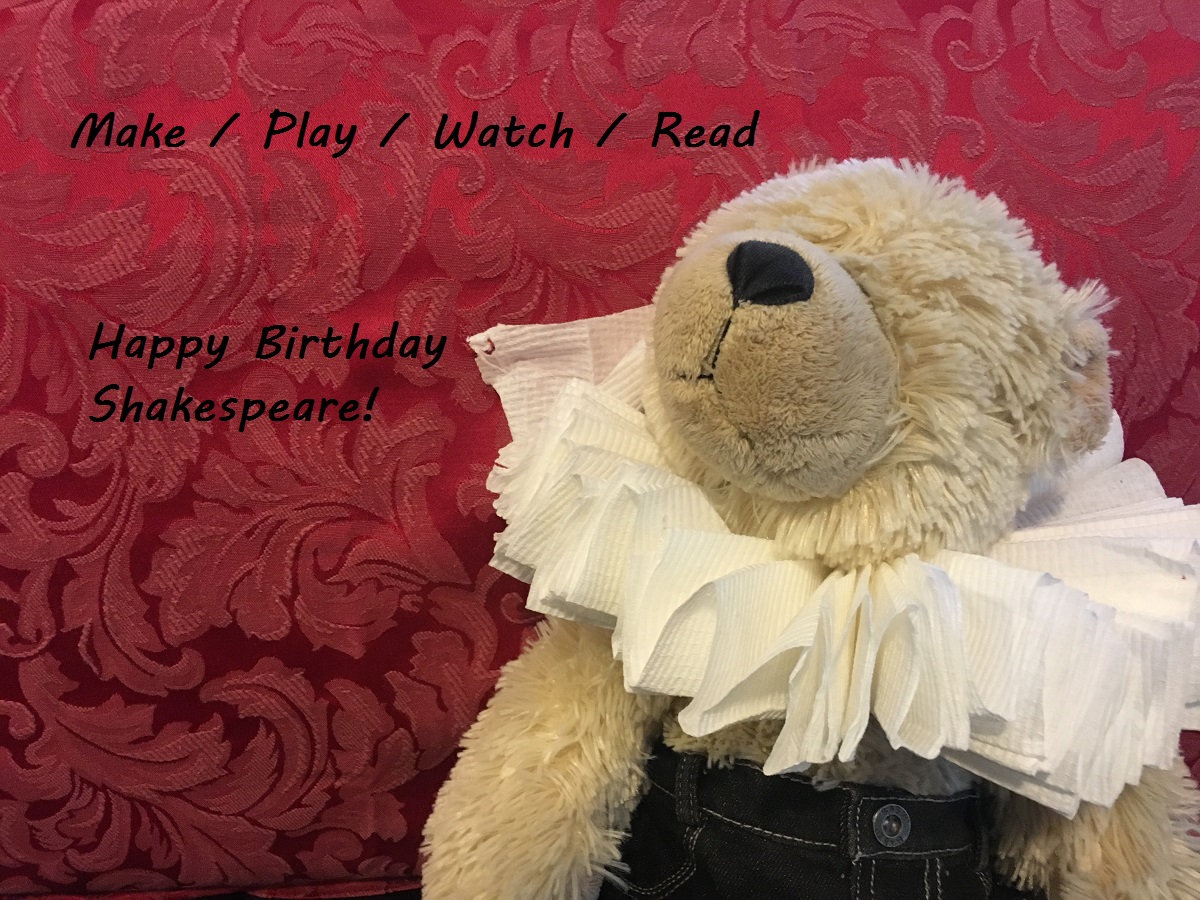 William Shakespeare, Master of Tragedies. So committed to his craft, he even achieved the most tragic of birthday gifts and died on his birthday. I mean, seriously. Taking the whole dramatic impression thing a bit far, mate. His voluminous amount of work is legacy enough. So much so that we have a dedicated day to celebrate his birthday AND death. Welcome to Shakespeare Day—April 23. Now let’s make, play, watch, and read with a Shakespearian flair!

Yes, you read it correctly. We’re going to make a Shakespeare-inspired ruffle collar (circa Elizabethan-era) from a toilet paper roll. Why? Because it is the ONE THING we can all relate to from the last 12-months: The Great Toilet Paper Hoarding of 2020. *groan*

What You Will Need

To be honest, there is no way I could have made this collar look as good as William the Bear. However, challenge accomplished! If you have any crazy DIY ideas, leave them in the comments below and I’ll see what I can do.

Despite Shakespeare’s everlasting impact on our literary and theatrical lives, there are few games truly inspired by his brilliance. While one or two games are built around Shakespeare’s craft of “putting on a show,” my favorite is Antidote and its Lab Romance expansion.

Antidote is a card game based on the process of elimination with an added hand of deception. I wrote a full review of the game for GeekMom, but today we’re looking closer at the expansion pack.

If there is one thing Shakespeare truly mastered it was the depiction of human behavior and our complicated web of relationships. Every play, every sonnet, every word was directly related to the human relationship with another. The Lab Romance expansion captures this perfectly, changing a simple elimination game into a more complex array of dependency and subterfuge. Eight of Shakespeare’s most tragic characters have been used to create new objectives for players, drawing upon the soul of the characters themselves. Shakespeare would have loved it.

A deadly toxin has been released into the lab. It’s hard enough trying to determine what the antidote could be, however, now you need to consider the workplace politics. In addition to the initial game set-up, eight (8) Lab Romance cards are shuffled and stacked face-down in the middle of the table. On your turn, instead of choosing one of the usual turn options, you may instead choose to draw a Lab Romance Card. You can only do this once per game and you cannot return it if you don’t like the new objective it sets for you. Your success, or failure, is now added in consideration for your final score.

How bad could a lab romance be? Well, you might be responsible for both you and your Romeo/Juliet surviving (that’s the player next to you). Maybe your kind heart is akin to Antonio and your goal is now to save everyone in the lab! Of course, there is also Othello, jealous and vengeful and determined to kill off everyone but your lover (any player you choose, I’m not fussy).

When we play Antidote at home, EG Sinister always wins in the general game because he has amazing deductive reasoning. However, when we add the expansion packs, it finally gives me a fighting chance! It is a great lesson in the messiness of human behavior and the unpredictable emotional drive that can lead us astray, even when our lives depend on it. Good life lesson, don’t you think?

Watch: 10 Things I Hate About You (Disney+/Amazon Prime)

Unlike games, there are many many movies inspired by Shakespeare. The best, based on my impeccable judgment, is 10 Things I Hate About You, starring Julia Stiles, Heath Ledger, Joseph Gordon-Levitt, and Larisa Oleynik.

As a modern retelling of The Taming of the Shrew, this is possibly the most perfect balance between contemporary storytelling and the utmost loyalty to the source material. 10 Things is set in a late 1990s American high school, with new student Cameron (Gordon-Levitt) instantly smitten with Bianca (Oleynik). Unfortunately for Cameron, Bianca’s father has some rather strict rules on dating, including the requirement for Bianca’s sister, Kat, to date first. Kat (Stiles) is less interested in the dating scene, making Bianca’s hope for dating seem highly unlikely. Cameron bribes Patrick (Ledger) to help out by wooing Kat, thus smoothing the path for Cameron and Kat to date. However, with its strong Shakespeare influence, the path is clearly not that smooth.

The title of the movie comes directly from a poem written by Kat later in the film, which is also an assessment for the class students to write their own version of Shakespeare’s Sonnet 141. To be honest, I don’t think the Sonnets gain enough respect, and this movie did a great job of raising their profile. The Sonnets had a bit of a revival again with Sir Patrick Stewart’s social media performance with a Sonnet-a-day during COVID-19 Lockdowns in 2020.

There are few elements in this movie that haven’t aged well (such as Kat’s “distraction” with a teacher) and some elements that touch upon some serious issues (such as the implied date-rape of Kat in high school). The movie’s strength comes from how they allow the characters to respond to these, especially in a 1990s high school setting. As I said, Shakespeare’s strength has always been in his characters and their relationships. The casting in 10 Things is one of the best I have seen in any movie and the actors truly shine in their roles.

This graphic novel is NOT for the kiddies and not safe for work (NSFW). Prince of Cats is definitely for the grown-ups, and especially for the Shakespeare fans looking for the extra edge. It is a big beautiful oversized graphic novel featuring one of the most colorful characters from Romeo and Juliet. And it is absolutely Tybalt’s turn in the limelight.

Prince of Cats is a hip-hop modernization of Romeo and Juliet, with Tybalt Capulet in the role of the main character. Both scene and dialogue are set in 1980s New York, however, Wemberly has kept the iambic pentameter and Shakespeare rhythm as the core of this tragic drama.

Tybalt is the cousin of young Juliet Capulet and often portrayed as one of the villains in Shakespeare’s most famous play. Tybalt is not a gentleman, neither in the source material nor this contemporary retelling. Instead, Tybalt is given room to breathe life into his character’s backstory and allow readers to see the more complex and yet trivialized relationships between the warring factions. Swords are still the weapon of choice, and misguided honor is still the easiest defense.

As mentioned previously, this book is not for children. There are explicit sex scenes, showing the intimate scenes between characters and giving us more background to the betrayal and neglect felt by some. What is even more powerful is the depiction of class, race, and gender by using hip-hop as its voice and Shakespeare as its soul. There is a somber moment when you begin to understand Tybalt’s own vulnerability and the dangers of black masculinity in a world already out to get him. Wimberly has brought strength to Shakespeare’s beloved characters, even in their weakest moments. On this hallowed day of birth and death, Prince of Cats is a fitting read for any Shakespeare fan.

Whether you are here for the witty comebacks or to swallow-dive into your despair, Shakespeare would have seen your place on the stage. Spare a moment in your day to give him the limelight (and the thunderous applause) he so dearly loved.

Mother’s Day: A Celebration of Every Identity