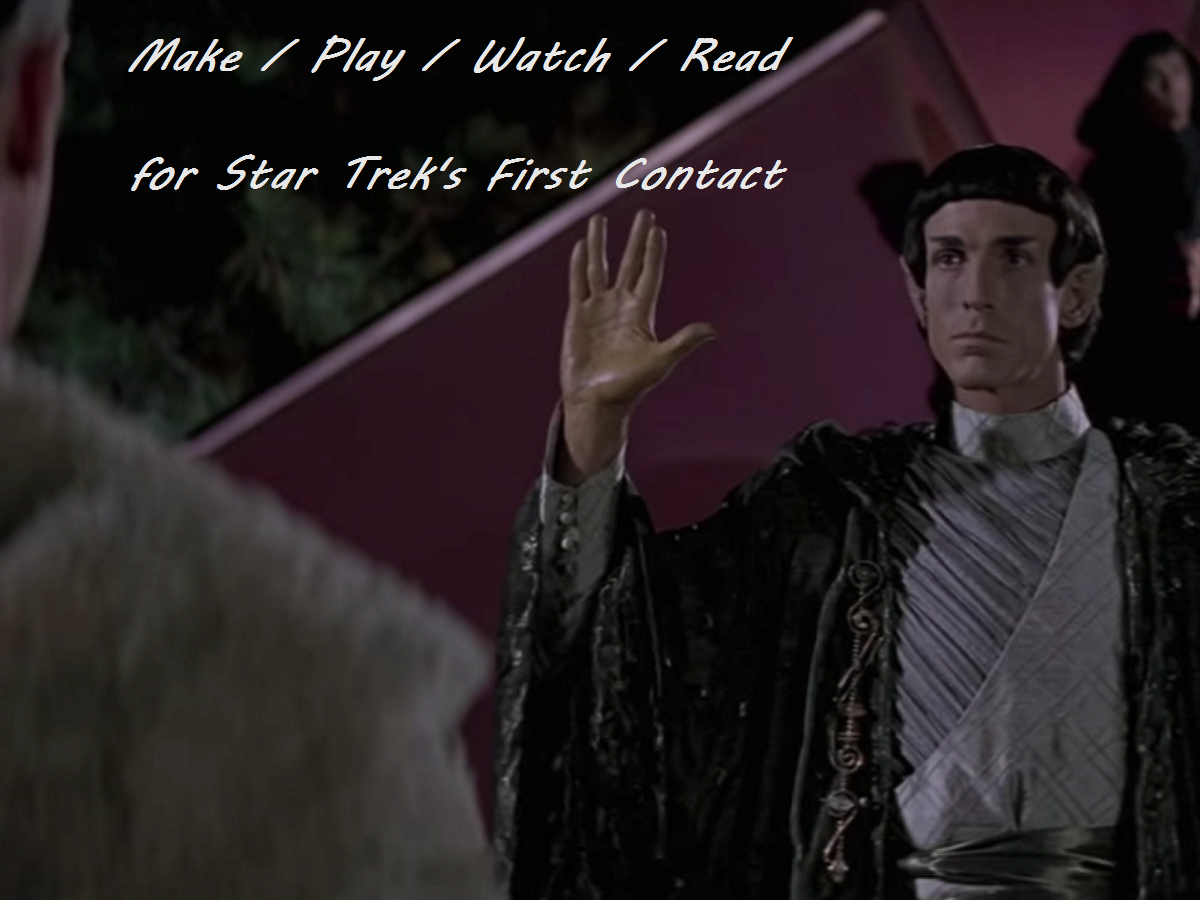 We’re starting our celebrations a little early. According to Star Trek, First Contact will be made on April 5, 2063—around 42 years from now, give or take a few days. The plan is for some white guy named Zefram Cochrane to be the first human to travel at warp speed and make the first contact with an alien species. So, we’re pretty much celebrating a day that hasn’t yet happened. But we are geeks. It makes perfect sense to us.

In the Star Trek Universe, there is an order to things. You can’t have Star Trek without the Federation of Planets. And you can’t have the Federation without first making contact with aliens. However, even this has a rule—you don’t see species from other planets simply turning up on Earth and saying, “Hey, how you doin’?” Other species, like the Vulcans, had a simple benchmark: a planet’s civilization needed to have at least developed warp speed to prove their technological advancement and thus their readiness for an alien encounter. This was the basis of the Prime Directive.

“The Prime Directive prohibits Starfleet personnel and spacecraft from interfering in the normal development of any society, and mandates that any Starfleet vessel or crew member is expendable to prevent violation of this rule.”

Star Trek history tells us Earth made First Contact when Zefram Cochrane displayed warp speed capability on April 5, 2063. It gives us a little time to prepare for the big event so let’s have a bit of fun with the Make/Play/Watch/Read.

Star Trek lore tells us the First Contact was made with the Vulcans. Time to train the youngest of geeklings and show the Vulcans your home is ready. Our Make is a really simple flour/dough 2D hand casting with a Vulcan hand gesture. This crafty idea is really popular with early-childhood teachers because it is super easy and fun for the kids.

Full confession: I had no idea there was an MMORPG for Star Trek (that’s Massively Multiplayer Online Role-Playing Game) until this week. And it’s not even a new game: it has been around since 2010. And it’s free. And it’s really quite good.

As mentioned, Star Trek: Online is an MMORPG, with extra emphasis on the M for Massive. Developed by Cryptic Studios, the game is available on Windows, PS4, and Xbox One. It is set firmly in the Star Trek Universe, about 30 years after the events of Star Trek: Nemesis and tightly held together with full respect for canon. While this makes it really appealing to established fans, there is enough introduction and customization to make it easily playable to new Star Trek fans. With the introduction of new television series (Discovery, Picard, and Lower Decks), information and gameplay are regularly being updated, keeping the game fresh and new.

One of my favorite features at the beginning of the game is the allowance for customization. There is a diverse range of species and details to choose from, akin to the selection allowed in Skyrim v: Elder Scrolls. If you are inclined, you can spend a lot of time researching the various species, ships, and histories to choose from. You can even choose which “section” of the Star Trek Universe you want to play in, from Star Trek: Original Series to the Dominion Arc and even Discovery. Once you have made your selection, your game starts on Graduation Day at Starfleet Academy, a nice safe place to familiarize yourself with the keyboard controls.

The game itself is a continuing story experience, moved along by the variety of missions with your ship and crew. Each mission takes about 45-minutes and fits within individual story arcs—a bit like having your own season of the shows.

On the downside, the visuals have not held up as well over the last 10-years. It was a little glitchy on my PC and the movements were generally a bit stilted, but we shouldn’t be expecting this to be comparable with Breath of the Wild and the like. For a game originally developed in 2010, it is still very enjoyable to play and still encompasses the majestic beauty of space and adventure.

Overall, I am really enjoying this game and learning more about the Star Trek Universe. It is an expansion of a geekdom I enjoy and has shown me elements I hadn’t noticed before. I love the opportunity to delve further and have a bit of freedom with creativity. With new updates being received to tie in the latest television episodes, I’m going to happily take my time and use this game as a relaxing outlet for a while.

It would be only logical to prepare for First Contact with the movie, Star Trek: First Contact. It is the most detailed retelling available in the Federation records. And it’s a pretty good movie too.

Star Trek: First Contact was released in 1996 as the eighth film in the Star Trek film series. It is the second film to feature the cast of Star Trek: The Next Generation (ST:TNG), including one of their own as director, Jonathan Frakes (who also portrays Commander Riker). While the movie is fairly set in the existing Star Trek series and refers to previous storylines, it can be enjoyed as a stand-alone with any gaps able to filled with inferences from the storytelling.

Star Trek: First Contact stars in the 24th century, when Captain Jean-Luc Picard awakens from a nightmare involving his previous assimilation with the cybernetic Borg. Unfortunately, the Borg are once again threatening Earth and Picard feels driven to help. During the battle, the Borg use time travel to alter the future battle in their favor. Picard and his crew manage to follow the Borg through a temporal vortex to avert the Borg’s interference. They arrive hundreds of years in the past on April 4, 2063. Suddenly, it becomes clear how the mission is now two-fold: prevent the Borg from interfering with the initial timeline, and do everything they can to preserve the First Contact—even if it means saving the earthlings from themselves.

This movie is a favorite amongst both new Star Trek fans and our treasured Trekkies. There is enough history there to keep the spirit of Star Trek alive, helped graciously by Director Jonathan Frakes being Star Trek alumni himself. The most significant point in Star Trek history provides the perfect springboard for new fans to gain a footing without dragging down viewers with too many Easter eggs. On the other hand, the Borg added a fresh touch with a continuation allowing established fans to continue the story. Out of all the Star Trek films, this is probably my second favorite to introduce to new fans.

There is really only one thing that can ever prevent First Contact from being made, and that is the Prime Directive. It is the first and foremost rule, the guiding principle of Starfleet. It prohibits all members from interfering with the natural development of any civilization. For example, if it wasn’t for the Vulcans witnessing Cochrane and his warp-speed capable spacecraft, the Vulcans would never have perceived Earth as being ready for First Contact.

Prime Directive is the best Star Trek novel to challenge this principle and throw some serious ethical questions. Captain James Kirk and the crew of the USS Enterprise have been found guilty of interfering with the natural development of a civilization, Talin IV. As the former crew of Enterprise seeks to clear their names, they will need to face how they interacted with the inhabitants of Talin IV and whether their actions caused or protected the planet against nuclear devastation.

The Reeves-Stevens team is considered the best at capturing the canonical characterizations of the Enterprise crew. From Kirk through to Nichols, each character is allowed to show their belief in the system and their need to question its validity. Prime Directive is one of my absolute favorites and a great example of the magic held by the original series.

First Contact may or may not happen in our lifetime, but that shouldn’t stop us from having a bit of fun with the preparations. Make your “welcome mat,” foster your enthusiasm with a good movie, and curl up with a book or computer game. There is no longer any reason for you not to be ready for First Contact. Be bold and go there. 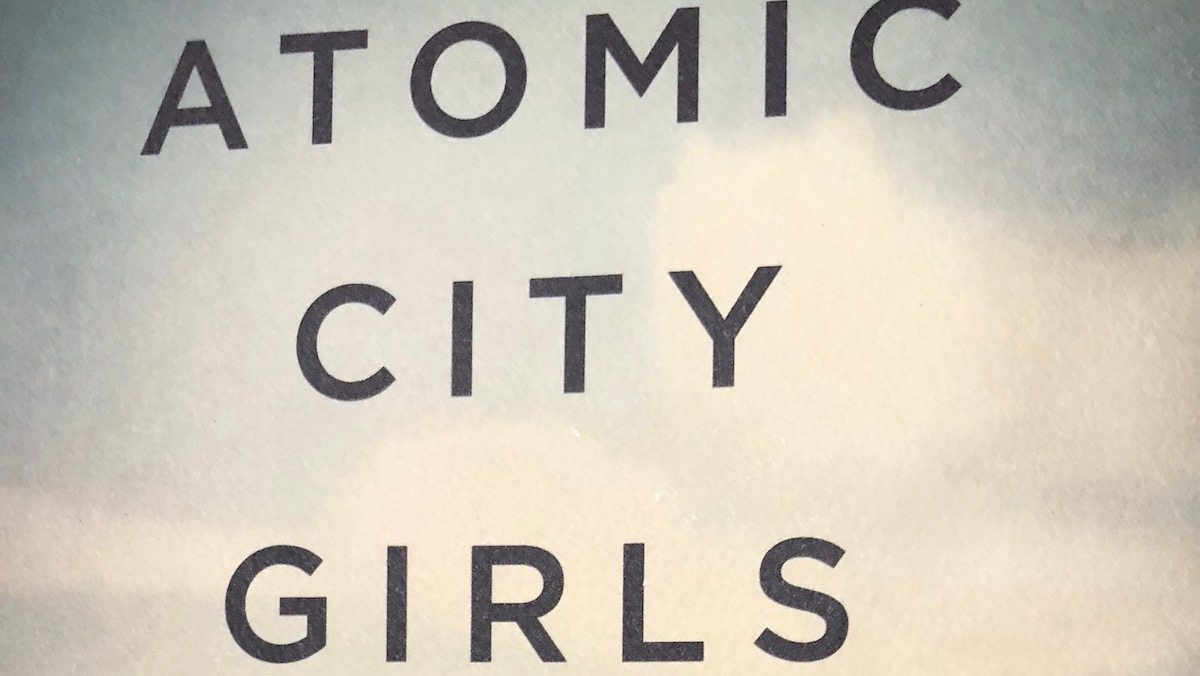 The Gift of Experience: How To Think Outside of the Wrapped Box