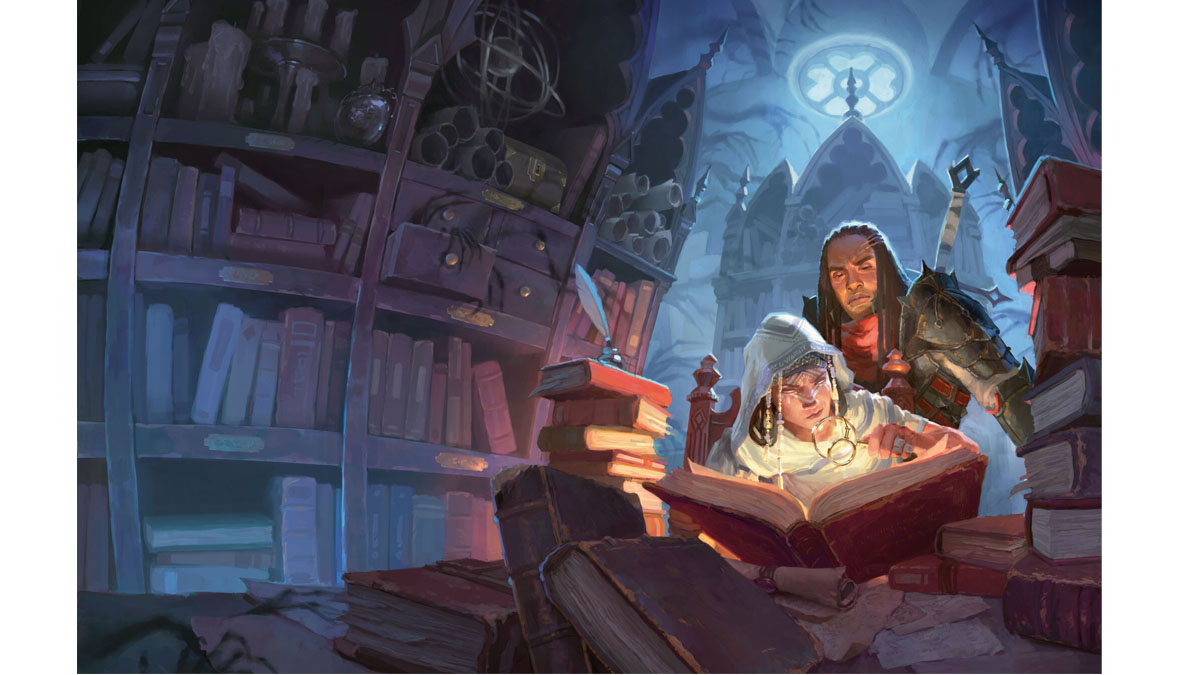 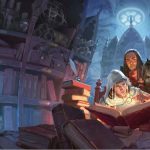 In our preview of Candlekeep Mysteries, we gave a quick glimpse into the upcoming features of this supplement. Now that we’ve had a chance to review the actual text, I’d like to share some more details about the stories, features, settings, and other content. Since this is ultimately an adventure supplement, this post is for Dungeon Masters, not players. I am not using spoiler text because it’s going to be 100% spoilery. Players should forward this to their DM and close the tab. DMs, feel free to read on!

Candlekeep Mysteries is comprised of 224 pages, includes a large tear-out map, 17 adventures, a setting (Candlekeep itself), and over two dozen new monster stat blocks. Each book and mystery is unique, with most “books” being a literal text, but others being a different object in disguise. Characters might be presented with a mystery upfront, or they may be given a seemingly straightforward mission only to discover a hidden mystery at play as they progress through the stories. There’s a helpful chart summarizing the adventures on page 5, including recommended levels for each adventure. You can also take players from level one to level 17 (or higher) using these adventures, but you may have to adjust things once in a while if your party levels too quickly or manages to avoid a significant number of obstacles which would have awarded experience.

The basic setting for this book is Candlekeep, the enormous library with strict restrictions on those who can enter. Much like Tales From the Yawning Portal, adventurers begin to play in a central location and are sent out into the world (or into the keep itself) to uncover the adventures, treasures, and more. To bring this setting to life, there is a chapter dedicated to Candlekeep, along with a large fold-out map included in the back. (As usual, the map is attacked with perforated pages, so you have to tear the map out to use it.) The setting includes several stat blocks for important NPCs like the various Sages and Miirym, the spectral guardian of Candlekeep. Keep in mind that you don’t have to use the adventures outlined here all at once, or even in any particular order. Candlekeep exists in the greater Forgotten Realms but can be substituted for various grand libraries in the multiverses.

DMs will also appreciate the details on the locations and residents of Candlekeep, including the hierarchy of the Sages who maintain the library, the support staff, specific NPCs, and nonspecific guidelines on who to include in your descriptions. The text also explores the magical shield that prevents flying into the keep, down to the nitty-gritty of how to get around said enchantment. While the setting of Candlekeep presented in this text isn’t as thorough as a traditional campaign setting supplement, it gives a broad enough coverage of details and organization to facilitate making use of Candlekeep over a long time.

The dozens of monster blocks available run the gamut from humdrum to exotic. Sages and Chwinga are old-hat, but Wereravens, Cloud Giant Ghosts, and all-new creatures like Skitterwidgets and Lichen Liches mix things up pretty dramatically. Every adventure, save one, introduces at least one new monster stat block. A small number are reprints, like the Chwinga, but they are necessary to the story, so they are included so you won’t have to get out yet another resource book to run these adventures.

The standout monster for me, though, is probably the Meenlock. The Meenlock is a 1st-edition monster with a long history of inflicting terror on any who cross their path. The various lore describes them as being created to destroy all things good, using hallucinations and other psychic trickery to split up the party before pouncing on unwary targets. Since Meenlocks are highly intelligent, devious, and ruthless, they are a great way to torture players with tricks in the dark preying on their fears and bringing the fear of what creeps in the night to life. As always, be sensitive to players with psychosis, as describing or imagining vivid hallucinations may be unsafe for them.

Each of the 17 stories centers on a particular mystery. Unfortunately, not all players are going to figure out every mystery on their own. There are many challenges that can keep players from putting the clues together on their own, including cultural differences, language barriers, or playing characters who are significantly more or less intelligent than the player. Thankfully, each adventure includes helpful NPCs and monsters who can gently nudge players in the right direction. If your players are getting stuck, you can also leave more obvious breadcrumbs to follow, like a tattered note which was obviously dropped or improperly destroyed. Always feel free to help your players out before they become overly frustrated, to maintain the fun of the session. This is also a way to “reward” players who obsessively want to roll perception to search rooms. There’s almost never anything to find, but they do it anyway, so you might as well make it work out beneficially for everyone.

An example of a mystery that isn’t obvious is “The Joy of Extradimensional Spaces,” which has seven puzzle books that have to be collected. Players must collect the puzzle books, arrange them in the proper order, and then speak the word spelled out on their spines to escape the mansion they’re trapped in. If players don’t immediately pick up on the importance of these books, you can point out that only a few books have a cover similar to the cover of “The Joy of Extradimensional Spaces” amongst the dozens and dozens of books on the mansion’s shelves. Alternatively, you can leave a note from the mansion’s owner, reminding herself or someone else to collect the relevant books with Mordenkainen’s face on them. Alternatively, you can have the homunculi drop a hint or two. If you’re completely at a loss as to how to get your players out, you can have the homunculi “remember” the password or know where to find it if the players are totally clueless.

Each mystery has its own launching point, destination, and notable locations. Each adventure has the party come through Candlekeep at some point. Some begin in Candlekeep and can be used if your players have come to Candlekeep for some reason of their own. Others include quests from around the world which task the party with collecting a cure, obscure text, or solution to a specific problem. These quests always lead the party to Candlekeep from somewhere else and are a good excuse for weaving Candlekeep in with your existing campaign. Some adventures take place entirely inside Candlekeep, while others might send you to Waterdeep, Tashluta, Baldur’s Gate, Anauroch, or somewhere on another plane of existence entirely.

Ultimately, there are tons of fun details and neat tricks that I can’t include in my post. There’s just too much packed into this tome! The promises made by Wizards for our preview were met and surpassed, and I’m very glad to have had a chance to review the full supplement. Whether you’re looking for a light-hearted adventure, a serious, combat-packed one-shot, or just a LOT of inspiration, Candlekeep Mysteries has everything you need to dive into your next adventure. With 17 adventures, dozens of monsters, a well-crafted setting, and excellent writing from all over the Dungeons & Dragons community, the only thing missing is a roster of new magic items. Enjoy the villains, the stories, and—most of all—the mysteries!

Click through to read all of “Full Review: ‘Candlekeep Mysteries’ Supplement for ‘D&D’” at GeekDad.If you value content from GeekDad, please support us via Patreon or use this link to shop at Amazon. Thanks! 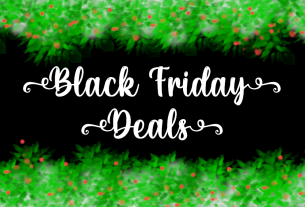 ‘South’ Is a Sweet Story of an Unlikely Friendship