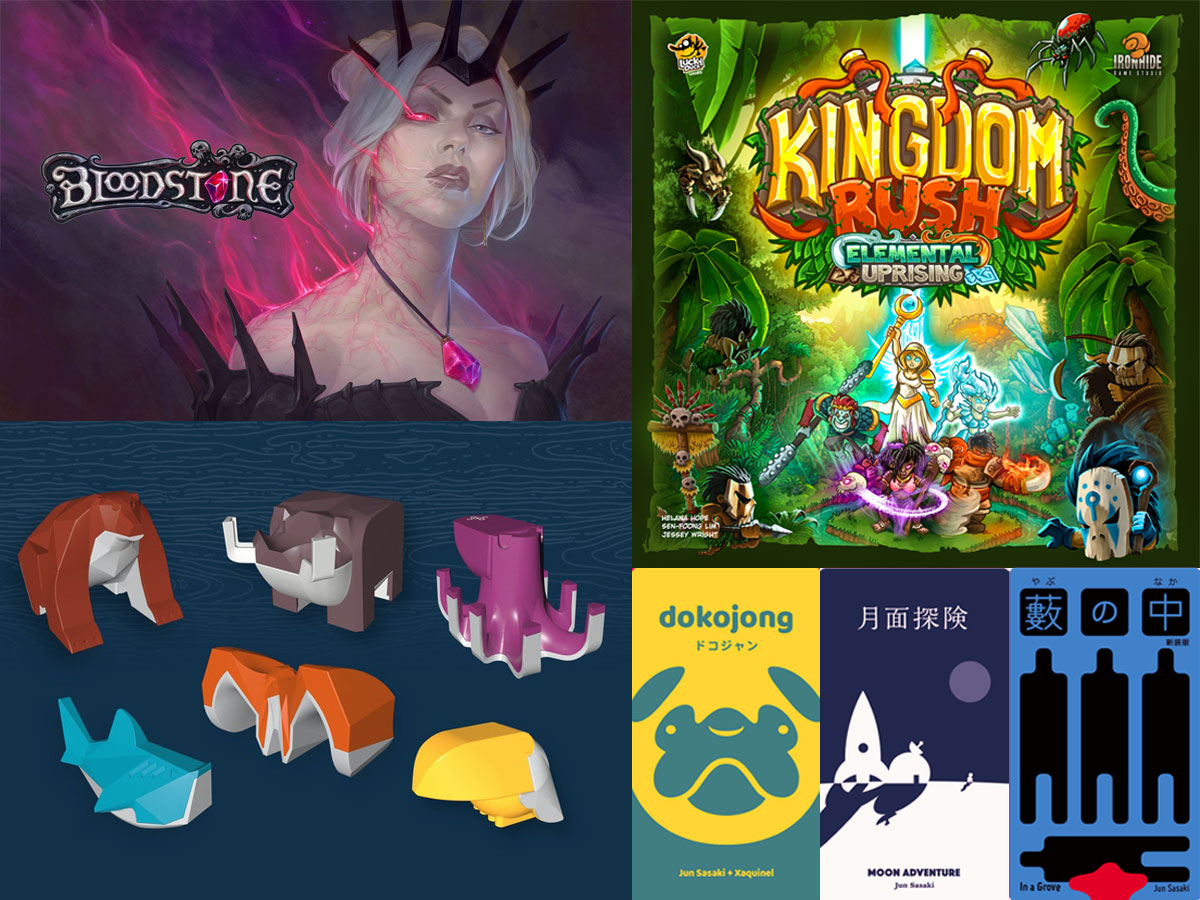 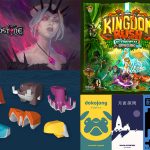 Well, it’s time for another roundup of tabletop games campaigns, and we have a new contender: this week’s roundup isn’t exclusively Kickstarter. Gamefound was started by a board game publisher, Awaken Realms, and has been used by a lot of publishers as a pledge manager after their Kickstarter campaigns. Last October, they stepped into the crowdfunding game with one of their own titles, ISS Vanguard, and this month Lucky Duck Games launched a campaign for their Kingdom Rush expansion. While the platform isn’t as well known yet, it’ll be interesting to see whether game publishers will find it a good solution for their campaigns—perhaps the biggest obstacle will be drawing the crowds who have gotten accustomed to Kickstarter.

One other thing, before I get to the projects: if you like RPGs, you should check out Zine Quest. Kickstarter has an annual challenge to run a 2-week project for an RPG zine (a small stapled or saddle-stitched magazine, often photocopied), and there are a bunch of projects that have been running this month, with a lot closing in the next two weeks. (I’ll plug one in particular, Twill’s Twist Points, because my friends Richard Malena and Julian Leiberan-Titus made it, but there are a lot to choose from!)

I’ve got a mix of projects to check out today, starting with projects that are closing the soonest.

The Kickstarter campaign for CoraQuest has actually already closed, but they’re still open for late pledges (on Gamefound, as it happens). It’s a dungeon crawl game made by a father and daughter team—it started as a personal project during lockdown, but now you can play it too! The character artwork is based on drawings submitted by kids, and it’s suitable for kids as young as six. It’s a fun story about a family making something cool together—maybe it’ll inspire you to make a game with your own kids! 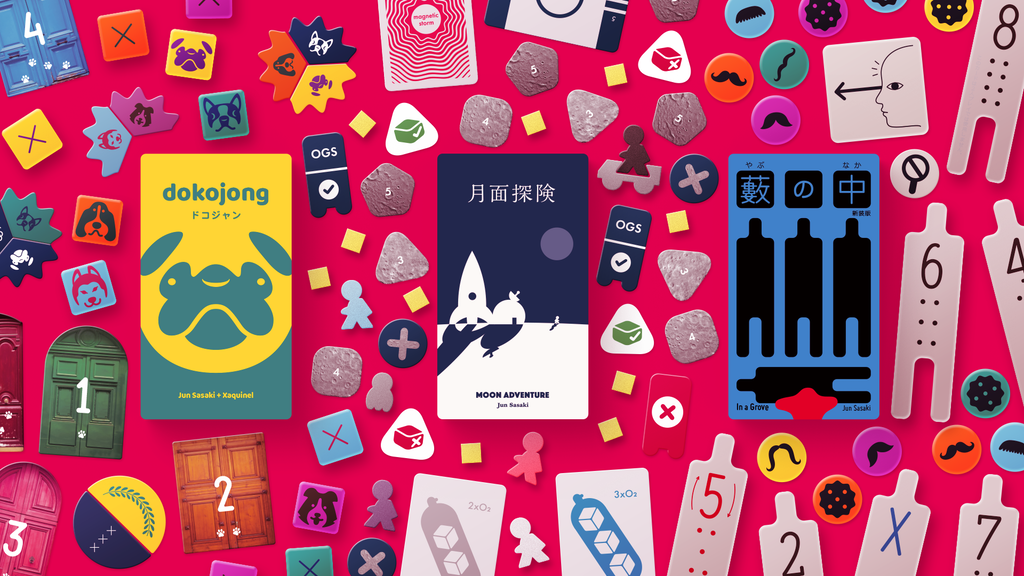 Moon Adventure, In a Grove, and Dokojong by Oink Games

Oink Games is a Japanese publisher that makes tiny box games—they’re pocket-sized boxes and are really adorable and fun. Deep Sea Adventure is one of my favorites and I often bring it when I travel … I mean, back when we traveled places. This is their first Kickstarter campaign, funding three titles: a remake of the murder-mystery In a Grove, and two new titles. I’m particularly interested in Moon Adventure because it’s based on the press-your-luck Deep Sea Adventure except it’s cooperative. These will be the Japanese boxes, but will include rules in both Japanese and English. I’m a little torn on this one, because the only option is to get all three games, which gets pricey (particularly taking into account shipping from Japan). Presumably if they do well they’ll eventually release English versions in retail, but I’m not sure how long that could take. Either way, gotta decide soon: there are only a few days left!

Another project that’s ending soon is Vault Wars: Relic Roadshow, an expansion to Vault Wars (which I reviewed back when it was originally on Kickstarter). You’re bidding on the vaults of deceased heroes but with limited information: does that vault have some hidden gems, or is it just full of junk? How much is it really worth? Relic Roadshow adds villains—there are new vaults that award relics to the second-highest bidder, and villains who are hoping you’ll do them a favor and acquire certain things for them. And there are some powerful temptations in the vices—but beware of becoming too corrupt, too!

I actually got a review prototype of Crayne: Fractured Empires sent to me back in December 2019, but before the planned launch everything got shut down. I’d gotten to play it twice before quarantine started; I hadn’t realized it was launching this past month, but I also haven’t been able get people together to play it again since then. It’s a deck-building battle game—you’re building your deck to attack your neighbors, eliminating them one by one until you’re the only one standing. There are several factions available, and the mix of factions you include in each play will change the feel of the game. Although I’m not generally a fan of player elimination, one of the interesting aspects was that it involved simultaneous play: each player chose a card from their hand to play, and they were all revealed at once. Maybe you played a card to build up some defense. Maybe you strike at your neighbors. It kept everyone engaged on every turn, and avoided the “multiplayer solitaire” feel that some deck-building games have. 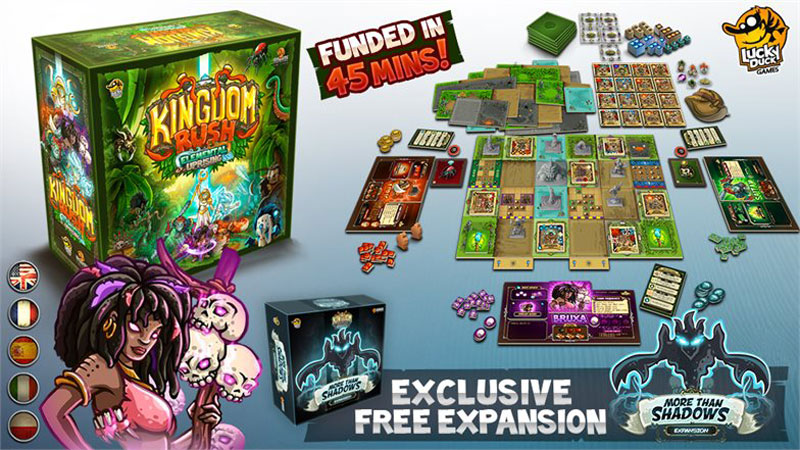 Kingdom Rush: Elemental Uprising is a standalone expansion to Kingdom Rush: Rift in Time, which was originally funded on Kickstarter back in 2019, but this time Lucky Duck chose to launch their campaign on Gamefound. Based on the popular tower defense app, Kingdom Rush is a cooperative game in which waves of monsters travel along paths toward your kingdom, and you must build towers to attack them before they reach their goal. As in the app, you also control a hero who can run around the board and fight. The game simulates the waves of enemies with cards that slide along the paths in trays, and you attack by placing polyomino tiles onto the cards, covering up as many enemies as you can. I’ve played the Rift in Time base game (though haven’t completed the campaign yet), and it’s been a lot of fun.

I’ll admit that Bloodstone isn’t the sort of game I’m generally as interested in these days: an arena battle that goes up to 8 players is, alas, something that I can’t even imagine getting to the table these days given the current state of things. But Druid City Games has been producing some amazing games with beautiful components (see also: The Grimm Forest, Sorcerer City, Tidal Blades), so this is definitely one to watch. I’m curious about the way that the arena itself seems to attack you, and I’m personally more interested in the cooperative mode.

Some of you may remember Beasts of Balance, which I reviewed for its first Kickstarter campaign and then after it was delivered in 2016. (You’ll even see a quote from my review on the Kickstarter page now.) Beasts of Balance was acquired from Sensible Object by Modern Games last year, and they’ve now launched a new project—if you’re new to the game, it’s a chance to get started. If you already have the original, you can add two new legendary creatures—the Phoenix and the T-Rex—as well as a pack of three dinosaurs.

Root, the game that combines asymmetric gameplay, deep strategy, and cute woodland creatures, is growing again! The Marauder expansion adds two new factions, the badgers and the rats. It also introduces hirelings—they’re available from each faction, and can be mixed in to improve the 2-player experience or to add even more combos in a game with more players. I’m always excited for more Root!

Crafting Arzium by Zoom Out Media

Okay, here’s one that isn’t a game: it’s a documentary about the creation of a game! If you’re a fan of Red Raven Games, you’ll want to check this one out. Arzium is the setting for titles like Above and Below and Near and Far, and this documentary follows Ryan and Marjorie Laukat as they work on their latest game, Now or Never. Zoom Out Media’s previous documentary, The Game Designers, was also funded through Kickstarter back in 2019, and it’ll be cool to see them take a deep dive into one specific game.

Click through to read all of “Kickstarter (and Gamefound!) Tabletop Roundup” at GeekDad.If you value content from GeekDad, please support us via Patreon or use this link to shop at Amazon. Thanks!

#LoveWins Among Geeks Too

Nintendo the Sound Track to Your Day?