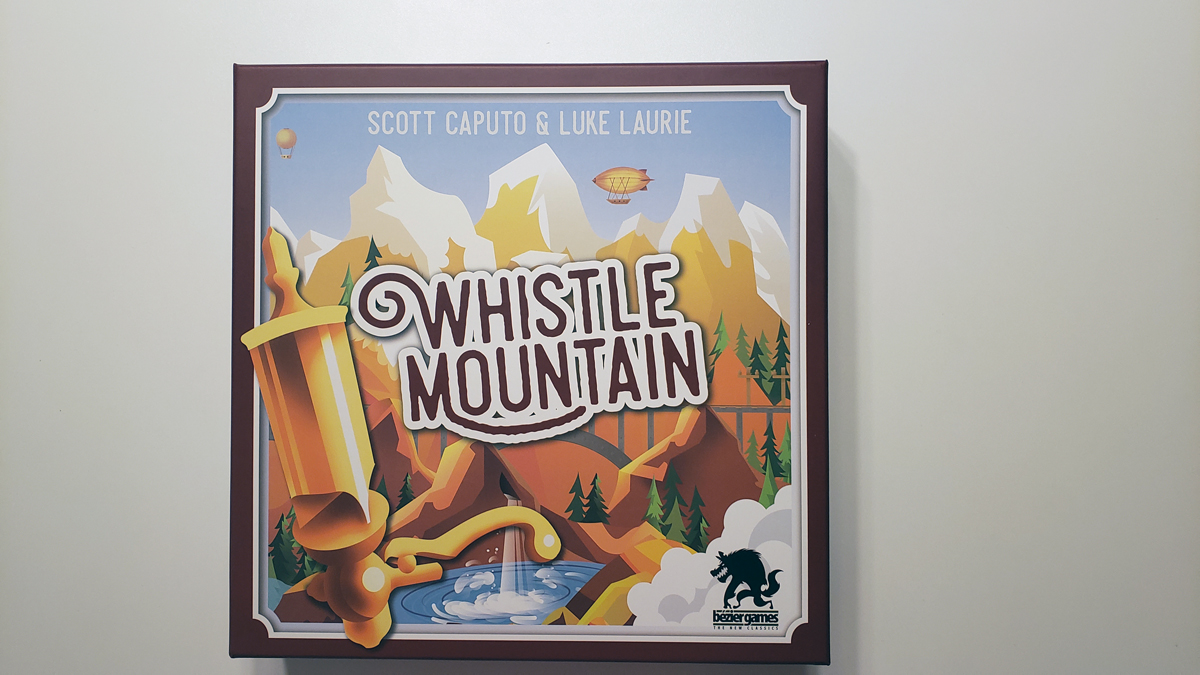 I really like board games designed where there’s not just one particular way to win, especially when the play mechanic is fairly straight-forward and the strategy makes up the real challenge. Whistle Mountain from Bezier Games is exactly that sort of game. GeekDad Paul and I both received copies of this game to review from Bezier Games.

What is Whistle Mountain?

Whistle Mountain is a tile laying, worker placement, and resource managing game where viewers compete to earn Victory Points (VP) faster than their opponents through a variety of ways. The game is designed for 2-4 players ages 14+ and takes approximately 90 minutes to play. The game has a MSRP of $69.95.

Overall, my first impression of the components is that they’re great and the amount and quality match up with what I would expect from a game in the $70 range. On your first play it will take you quite a bit of time to get some of these things punched out and sorted (plastic bags are included) so I think that stage took us about 30 minutes. Not an issue for us, but if you are setting this up as a game night sort of thing you should be prepared to calculate that into your playing time the first time around.

I really like the board and find that I’m starting to appreciate the puzzle piece board style more compared to the traditional fold up style. The art is simple but attractive and I really like how there’s a designated space for everything given the sheer amount of components the game contains. I find that level of organization really helps set-up too. There’s even little slots to put in the plastic Water Bar Holders. The board itself is cardboard but not as thick as the old style fold-up boards so it takes up less box space, yet it’s still sturdy.

The remaining cardboard-based pieces are sturdy and gorgeously designed. The Player boards have slots to pop pieces into, which really keeps your game space organized. Shapes and sizes are also used to help identify the pieces, making it way less overwhelming to keep track of what’s what. The remaining cards are pretty typical thickness and the designs are simple and easy to read.

I also want to note how well the instruction booklet was done. The fully colored diagrams made setup way less daunting and really helped to demonstrate the gameplay examples. There’s also a series of very nice tables explaining things like the Machines, Upgrades, Cards, Starting Abilities and Awards. Keep this in an easy to reach place while you play.

Summarized up, the components show not just quality but a lot of forethought in making the game easier to play.

How to Play Whistle Mountain

The goal of Whistle Mountain is to earn more Victory Points (VP) than the other players with a combination of resource management, worker placement, and tile laying. Some of your actions will build up your own efforts but a clever enough player can also sabotage the efforts of others.

With this many pieces, you are going to need some time for setup. Luckily the Instruction booklet has a beautifully labeled and organized diagram that helps you to set up the Game Board and the Player Boards. The fact that everything has a little designated area really helps to make this a smooth process.

Follow these steps in order and set up goes nice and quick considering the number of components involved. You are now ready to play Whistle Mountain.

Overall, the gameplay is something that you get more comfortable with as you play and get familiar with the game. At it’s very core though, a Player is essentially choosing between one of two choices each turn: Collect or Forge. Note: Players may take more than one action if they have a Card or Award that allow such.

If a Player chooses Collect for their action, they must have an Airship still in their Dock. That Airship can be moved into a Machine on the grid, on the grid, or in a Dock. Airships cannot be placed on other Airships, Scaffolds not covered by Machines, or more than one Machine. Note, you are limited to 4 of each Resource and 6 Upgrades. Whistles are Wild Cards and may take the place of any other Resource.

Airship on the Grid:

Airship on a Machine:

Airship on a Dock

You can only Dock your Airship where you can afford to activate the action. Preform the action right away. If a Card lets you bump another Airship, that Airship goes back to its Player’s Dock. There are a number of Docks a Player may land on:

Return all of you Airships to your Player Board. If they’re already all there from a previous turn, that’s okay. You can Forge up to 4 Works in any order. Three Works can be Builds, 1 Work may be a Move or a Rescue. Your first build is free, a second or third in the same turn costs 1 Water each.

Take a Scaffold from your Storage and place it on the board above the highest Water Bar. At least 1 square space must be adjacent to a visible Machine or Scaffold already on the grid. You may rotate or flip the Scaffold. Once place, score and collect 1 VP for every segment edge of the Scaffold that touches a visible Scaffold or Machine.

Placing a machine takes a few more steps than a Scaffold.

Moving or Rescuing a Worker

You may play up to one Card and redeem one Award as Bonus Actions. Once played, the Card goes faceup in the Discard Pile, but the used Award is removed from the game. Bonus Actions can be taken at any point during a Player’s turn.

Collect any Turn End benefits and pass play to the next Player.

When there are no more Workers in the Barracks, Game End is triggered. The Active player finishes their turn and the other Players each get one last turn before Scoring. Players add the following VP points to what they have already earned:

Why You Should Play Whistle Mountain

The game is gorgeous and has beautifully crafted components that are easy to identify and differentiate from each other. The Game Board and Player Board were designed to keep game play organized and smooth running, which is essential with a game that has as many components in play as Whistle Mountain. I really feel like it was designed to rein in any feeling of “this is going to be so complicated that I’m overwhelmed.”

The instruction booklet with it’s full color examples was a huge part of being able to quickly grasp how to play the game and made it very easy for us to go “okay, got it,” and get to playing. The setup diagrams really simplified everything so that we could get to playing faster. The reference guides in the back were also a nice touch instead of trying to cram everything onto a small Game Component.

Gameplay can feel like a lot, but it really comes down to making one of two choices and following the procedure there. It did not take long for us to catch on to the turn mechanic at all. That being said, there is a lot of strategy packed into this game. Deciding when to grab Resources, when to Build, and when to Rescue or move Workers is a careful balancing act. I cannot count the number of times I thought I had a nice combination set up only to have my husband thwart me with his next move. He also had a habit of building Machines in ways that didn’t promote my Workers which is super dangerous once those Water Bars start going up (once they start going up, they go fast). I lost a lot of points to Workers in the Whirlpool and the lost opportunity for those Tower points at the end really dinged my overall score. Players also really need to keep those End Turn abilities in mind. I had a nice amount of Upgrades going on that was supplying me with quite a few benefits on my turns to the point my husband had to find ways to cut off some of those benefits. I will note that the game also took us closer to 2 hours and 30 minutes to play. I’m not sure if it was because it was our first time playing, if games played with fewer players take longer, or because we Tetris placed a lot of those early Scaffolds so nicely that it took awhile before we started raising the Water Bar and loosing Workers from our Barracks.

The game is aimed at 14+, and between the playtime and the balancing act of all of the game aspects, I probably would not recommend trying it with an elementary age school kid that wasn’t already accustomed to playing longer games in the 14+ range. That being said, I’m pretty sure there are middle schoolers that should be able to handle this sort of game, especially if they’re already into strategy-based games. It might not be the best game to pull a casual or newer board gamer into, but I do think this would be a fun game to ease someone into over time.

Overall, it’s a great game for an evening board game night and it was so well done that I will eagerly be watching for other titles from Bezier Games. The game has a MSRP of $69.95 which lines right up with the quality and number of components, well done gameplay mechanics, and replayability.  You can get a copy directly from Bezier Games here or via Amazon for $69.77.