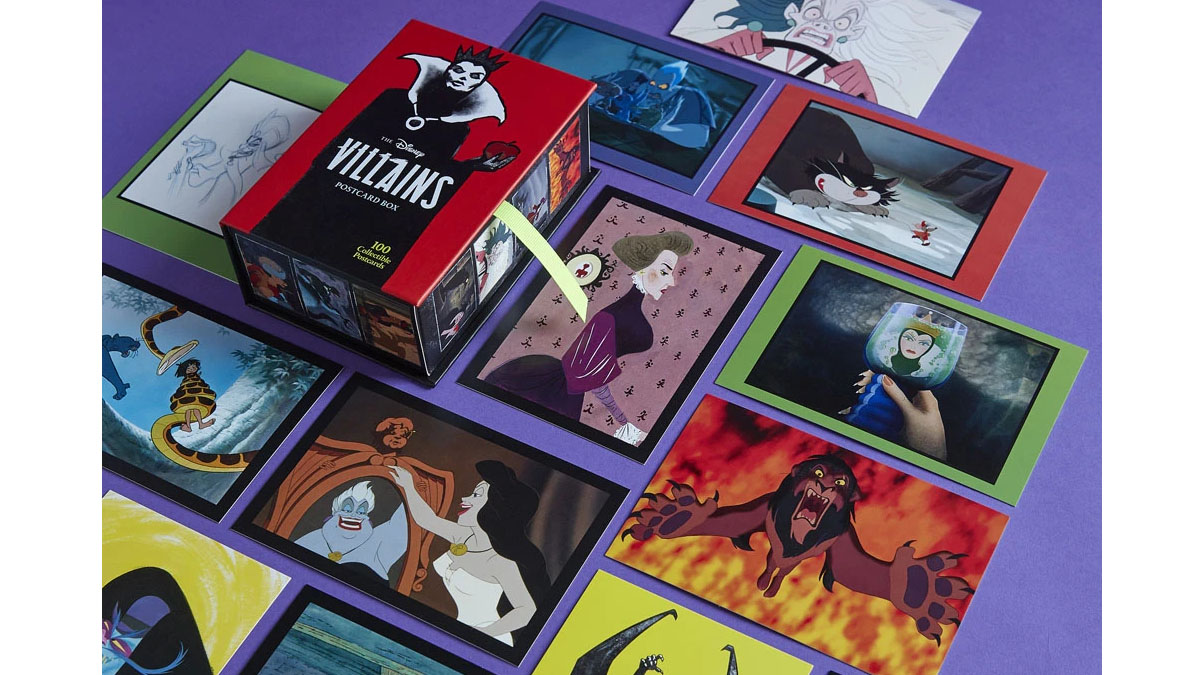 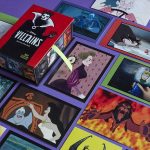 Let’s face it: We all relate to at least one villain. And Disney has so many iconic villains, it’s no stretch to think that most people relate to at least one Disney villain in particular. Whether that’s loving Ursula’s clever use of contracts or the dedication of many villains to the causes they believe in, it’s natural to find some common ground with these characters. So, how do you celebrate your wicked interior without coming out of the closet of wickedness? With fun and iconic art, of course! I’m referring to the Disney Villains Postcard Box from Chronicle Books.

The Disney Villains Postcard Box is a collection of 100 postcards, each featuring iconic art depicting the villains of various Disney works. You have some staples like Ursula and Maleficent, but you also get some of the more obscure villains like Pain and Panic, the comical servants of Hades from the 1997 film Hercules. The backs of each postcard give you some information about the art. For example, a sketch of the Queen from Snow White and the Seven Dwarfs has the following caption: “Snow White and the Seven Dwarfs, 1937. Cleanup Animation Drawing By Art Babbitt | Graphite, Colored Pencil.” Other postcards feature film frames and require less explanation. Those postcards simply have the name of the film, the year it was released, and the caption “Film frame.”

My first thought when I opened the (admittedly beautiful) box to inspect the cards was that I hoped there were two of each card, so I could send one copy and keep one copy. Alas, this was not the case. Fortunately, this means that there are 100 unique cards. Why is this fortunate? Because it forced the product designers to stretch their imaginations and include a wildly diverse cast of characters in this product. We see villains from Snow White and the Seven Dwarfs, Sleeping Beauty, Hercules, Tangled, Robin Hood, and many more. For a full list, check the spoiler box below.

The 29 films featured in the box, in no particular order:

Who is it for?

The Disney Villains Postcard Box is for anyone who enjoys sending postcards, enjoys Disney Villains in general, or enjoys framed art displays. Because of the sheer scope and variety included, compiling a collection of postcards for displays is easy, no matter your aesthetic. If you want dark, brooding, and wicked, there are lots of classic Disney villains to be had. If you want something more innocent looking, there are a variety of duplicitous villains with happier themes to their art. If you just want to send a TON of postcards, but don’t want to spend over one hundred dollars, this box is a fun and affordable option.

The Disney Villains Postcard Box is a collection of 100 unique postcards featuring dozens of villains from 29 different Disney animated titles. At $22.95 ($20.67 on Amazon), this is an affordable way to add a huge range of art to your collection or to start (or continue) your postcard sending hobby. The only warning I’d give is that if you (or the person you’d like to send the cards to) haven’t seen the titles listed above, you might get some spoilers as to who the villain actually is.

Click through to read all of “Send a Hint of Wickedness With the Disney Villains Postcard Box” at GeekDad.If you value content from GeekDad, please support us via Patreon or use this link to shop at Amazon. Thanks!

DC Comics This Week: ‘Secret Six’ Is A Slam Dunk

Gearing Up for San Diego Comic-Con