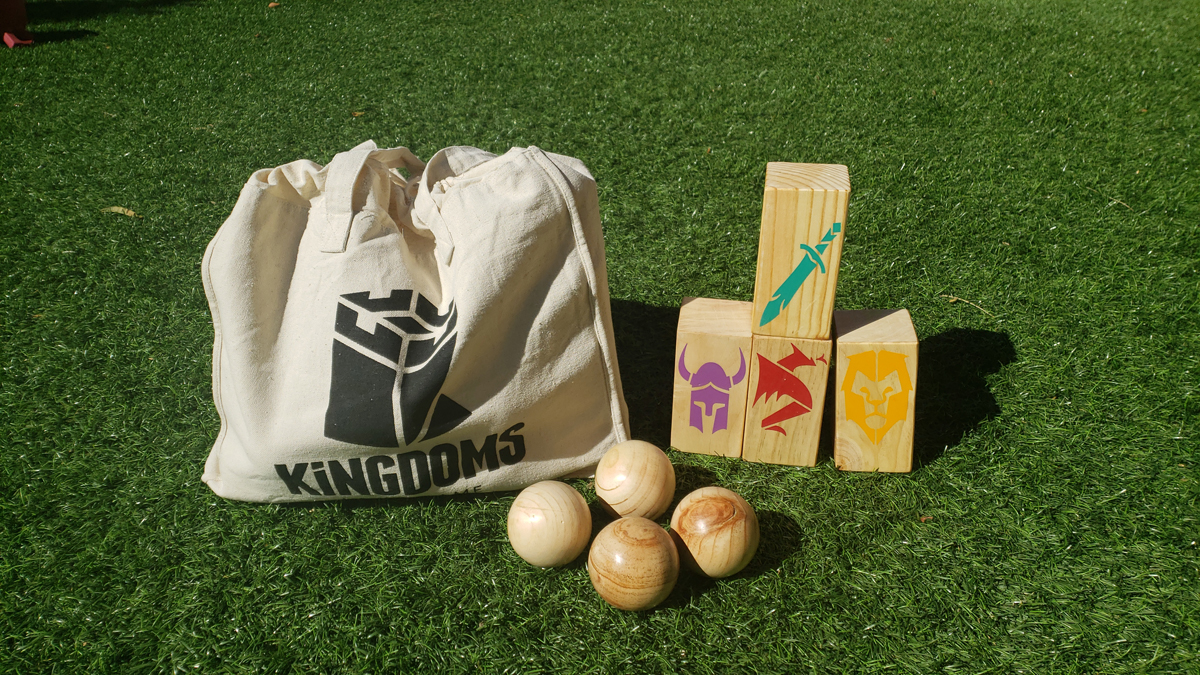 As our kids have both hit elementary school age, I’ve had more interest in backyard games that can be played when they have playdates or just to get them outside for a little bit. When I first heard about Kingdoms Lawn Game, I was intrigued. It felt like one of those backyard games, but with a geeky twist. I jumped at the opportunity to be sent a copy of the game in exchange for a review.

What is Kingdoms Lawn Game?

Kingdoms Lawn Game is an outdoor game that feels like a cross between bowling and skeeball. It’s designed for 2-16 players ages 5+ and takes about 15-30 minutes to play. there are three versions of the game that can be played alone or combined for larger groups to play. It was first launched as a successful Kickstarter, and has now become available for non-backers. The MSRP is $98.

The components of this game are absolutely incredible. I love when outdoor games are made with wood, highlighting craftsmanship as opposed to vinyl and plastic.

All of the actual playing pieces are made of wood and veneer which I absolutely love. The only quibble I have is that since the Wooden Stakes are wood with a pointed end, anyone with turf instead of grass in their backyard will need to find a substitute piece. Otherwise, the stakes went beautifully into the grass in our neighborhood’s little park, even though the dirt out here in the desert can be particularly brutal on stakes that are too flimsy. The Wooden Armies are just wooden skeeballs and have enough weight to do their job, but are not so heavy as to be hard for younger kinds to handle. The Armies are large blocks marked with colorful designs to designate different players/teams. The design did a great job of differentiating things by color and design across the 4 different sets so that even if you are playing a combined game, it’s easy to recognize which Castles go to which player.

The instruction booklet I got has been tweaked a bit since to make it small enough to fit in a back pocket and the rules have nicely been streamlined a touch more.

The canvas bag for carrying everything is really nice. The bag is nicely sturdy and balances the weight of the pieces well. I like that it also makes the game very easy to take along to play outside of your own yard.

Overall, I love the components and I know they will hold up well to lots of play. They have the sort of sturdiness that lets you know you’ll still be able to play the game years from now.

How to Play Kingdoms Lawn Game

Since there are three versions of Kingdoms Lawn Game, I will note that we received the Ancient Version which is often recommended for beginners. The New Age and Distant Lands versions have different stake layouts and Special Abilities. There is a diagram for playing with multiple editions in the same game.

The goal of Kingdoms Lawn Game is to be the last player (or team) with any standing castles left.

Getting the game setup isn’t too bad, but kids will probably need an adult to do it for them since the play area has to be measured. The game requires a 30ft by 30ft playing grid or Realm. I recommend using a measuring tape to help with this. The instruction booklet gives a nice diagram of the layout. For the Ancient Version, the 7 Wooden stakes are placed in a square shape at 15ft intervals with the side that has the Battle Line skipping the middle stake.  The ground does not have to be smooth and obstacles (natural or added) are welcome.

With your Realm set up, each Kingdom or Player/Team randomly selects from one of the 4 Castle Types and takes 4 Wooden Armies. Players should note that each Kingdom has a Special Ability. For the Ancient Version, those abilities are as follows:

Each Kingdom is spread out evenly behind the Battle Line in order determined by the diagram and must remain in their designated location.

Kingdoms then take turns building Castles down the Battle Line. On a Kingdom’s turn, a single Wooden Castle in thrown underhanded into the Realm. The Castles must land within or on the boundary line, but any that land completely outside of the boundary line are disqualified. The castles can be on or touching other objects, but if those objects would either make the Castle too unstable to stand or too stable to be knocked over at all, the Castle can be moved 5.5 inches away. Once all of the Castles are placed, they must be stood upright with their symbol facing the Battle Line.

The game is now ready to play.

This is one of those games that really is quick to learn, which is why the recommended play age can go down as low as five. The game has a few phases that move pretty quickly.

Starting on the left of the Battle Line and moving to the right, each Kingdom gets to throw or roll one Wooden Army underhanded at the Realm, trying to knock over enemy Castles. A player can knock over numerous Castles or even their own (ooops).

Each Kingdom retrieves its Armies. Any fallen Castles remain as obstacles, but if no Castles were knocked down, move the Battle Line up three stake lengths.

If a Kingdom runs out of standing Castles, it can either be removed from play or act as mercenaries trying to still take out other castles.

Kingdoms not being played by a Player can still have its Castles thrown in as Ghost Castles. If a Player knocks down a Ghost Castle, they get a Ghost Army to use for the rest of the game.

Kingdoms can make or break Alliances with each other at any time.

The two phases repeat until only one Kingdom has any Castles remaining and is declared the winner.

Why You Should Play Kingdoms Lawn Game

Overall, Kingdoms Lawn Game is a great new option for outdoor games that work well with single families or groups of friends.

I love the quality components that should stand the test of time and hours of play. Real effort was put into making a quality game and it shows. The fact the game is so portable in a huge bonus.

Set up is fast enough that you can jump into playing fast, and the rules are very easy to verbally teach to other adults and kids alike. I like that this is flexible enough for my family of four to play and enjoy while we’re still social distancing, but it will also work well for group events and playdates when things start returning to normal. I’d also recommend this for families to take along as an activity for camping trips. Schools and summer camps would also get a lot of distance out of this as an outdoor activity.

Play has that interesting balance of skill and strategy that manages not to be too overwhelming for younger kids. Even our six-year-old managed to knock over a Castle as we played in two-person teams, and our ten-year-old came pretty close to knocking over two in one shot. Uneven terrain actually provides some fun challenges, as a sudden slope or bump can change a rolling Army’s direction. There’s certainly choices to be made of how far or close together you want to place your Castles. For an extra challenge, include a play area with obstacles like trees or add your own with cones or other objects.

The game is probably set at a fair age range. Younger than five and I’m more concerned about coordination or care with a game that requires throwing objects, although depending on your own kid, your experience may vary.

Replayability, including numerous games in a session, is very high. Our kids wanted to go right back to playing a second game and the only thing that stopped us was the sprinklers coming on. We loved it enough that I am seriously looking into grabbing the other versions to give us more playing options, especially when large group activities become part of our lives again.

At an MSRP of $98 it’s admittedly a higher end game but I feel like it’s in fair range with other similar outdoor games I have seen, especially with all of the wood components. I have certainly seen a number of outdoor games with plastic and vinyl pieces at a higher price range. It would be a super nice holiday gift for the family, or a great gift for those newlyweds that seem to have everything but love outdoor gatherings.

You can get a copy of the Ancient Version at Uncommon Goods here, or find all three versions at Et Games here.