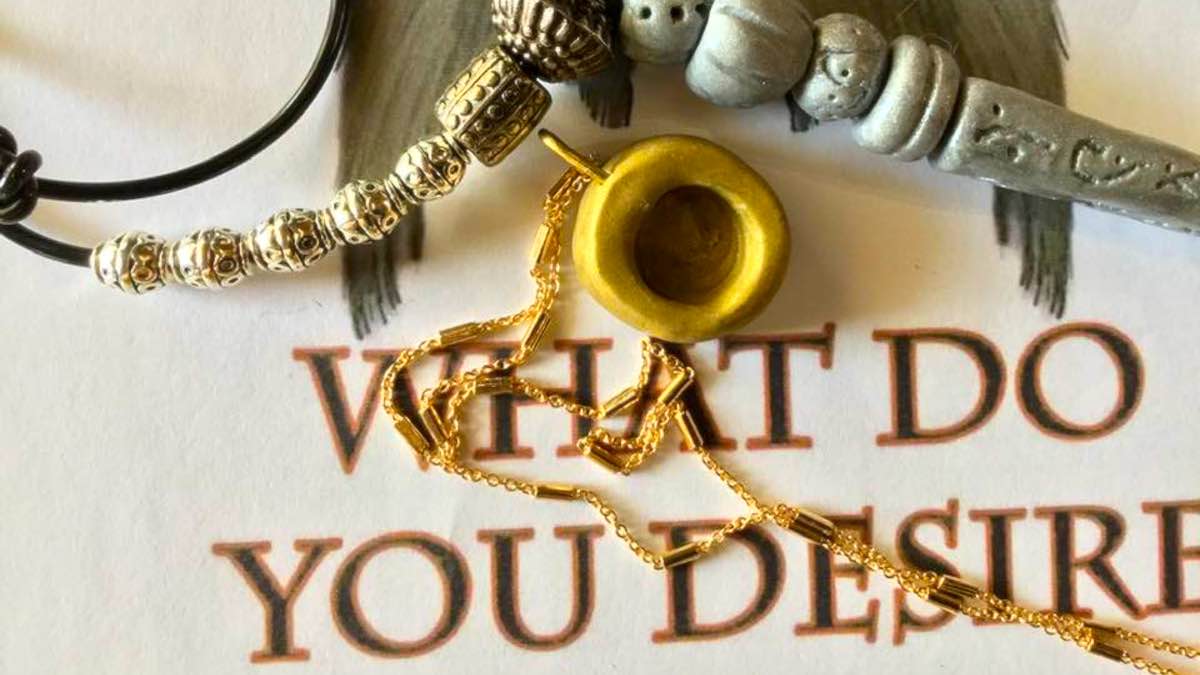 The fifth season of Lucifer is here, and quickly rose to Netflix’s top streaming show for the week. Although readers of the original DC Vertigo comic might find the interpretation a bit of a departure from their Sandman Universe, it is still a fun, sassy, and sexy series.

It also seems to be very attuned to its necklace symbolism. This includes forensic scientist Ella’s cross necklace serving as a visual reminder of where she stands on her faith, including when she lost it and regained it, and the über expensive stolen necklace that brought the train wreck of the Eve storyline into play. Throughout the series there are two necklaces that really stood out: Amenadiel’s “key” necklace, and Chloe Decker’s “bullet” necklace.

Since the officially licensed Lucifer merchandise world is practically nonexistent, both of these necklaces can be closely replicated with materials like polymer, and some jewelry supplies.

The necklace, a gift God gave “His favorite son,” served as the key to Flaming Sword, and throughout the series we learn just how important it is to Amenadiel personally. Later, in one of the series’ more touching moments, after the murder of a teenager named Caleb, for whom Amenadiel developed a father like affection, the angel left the necklace with Caleb’s body as a way to honor him.

What I like about this piece is it has a look that could fit in with a variety of cultures, from ancient Asia and the Middle East to African to the indigenous North American cultures to early European designs. It gives a sense that artistic minds from cultures all around the world drew their divine inspiration from the same muse or higher power.

It is a very simple, and attractive piece, and for the most part needs only some round silver beads and a plain black cord or chain. Bakeable polymer is one of the better ways for those of us who aren’t metalsmiths, and who don’t own a 3D printer to recreate the patterned, elongated main piece (the key).

• A black leather or silk cord

• Some round, silver beads (you can pick your own pattern, since the “key” pendant is the key to the look.

First, roll out a piece of silver polymer into a long tube about, and taper it at one end. Mine turned out to be about 5″ long, but it can be shorter if you need.

While the bottom half remains pretty much untouched, gently press the thicker top half, so it has four flattened, sides. Use a toothpick or thin pen tip to draw some crescent and other designs on each flat side. It doesn’t have to be identical to the one used in the show. Several crafters and artists have made their own replicas with their on variations, and they all still recognizable as Amenadiel’s pendant to fans of the show.

The top part is a pretty complicated design, but to make it easier for novice crafters, we’ll recreate it by making four balls with the polymer. Use a toothpick to shape each ball with a different pattern.

Take a piece of beading wire and fold it in half, leaving a loop at the top so it will be about half as long as the pendant, and gently push it through the pendant. Bake the polymer per the brand’s directions, with the wire in it, that should keep it all together.

Once the pendant key is done, string it on the cord, as well as several silver beads on each side to finish it off.

This pendant was a special custom birthday gift given to Detective Decker by Lucifer, made from the smashed bullet she used to “penetrate”his leg in the first season as it soon became clear she was the one person who could make him “vulnerable.”

This is a much easier piece to make, but is a nice, simple tribute to the show.

To make this piece, simply roll piece of polymer into a ball (no bigger than 1″ diameter) and press it on a flat surface to make a think disc. Shape it so one side is more tapered than the other (it will have a slight trapezoid look from the side). Use the end of a large marker or highlighter to press an indention on the more tapered side, slightly off center. That’s all there is to the basic shape.

For the link, fold a small piece of wire in an arc and push it gently in the side of the “bullet.”

Bake the entire piece, and then string it on a gold chain.

Both of these pendants are something mega Lucifans might identify right away, but both work as attractive enough pendants for even those who haven’t seen the show to admire.

Use them for cosplay or gifts, or keep them yourself…if that’s what you really desire.

Stay tuned for another Lucifer DIY from me when the second half of the season hits soon.