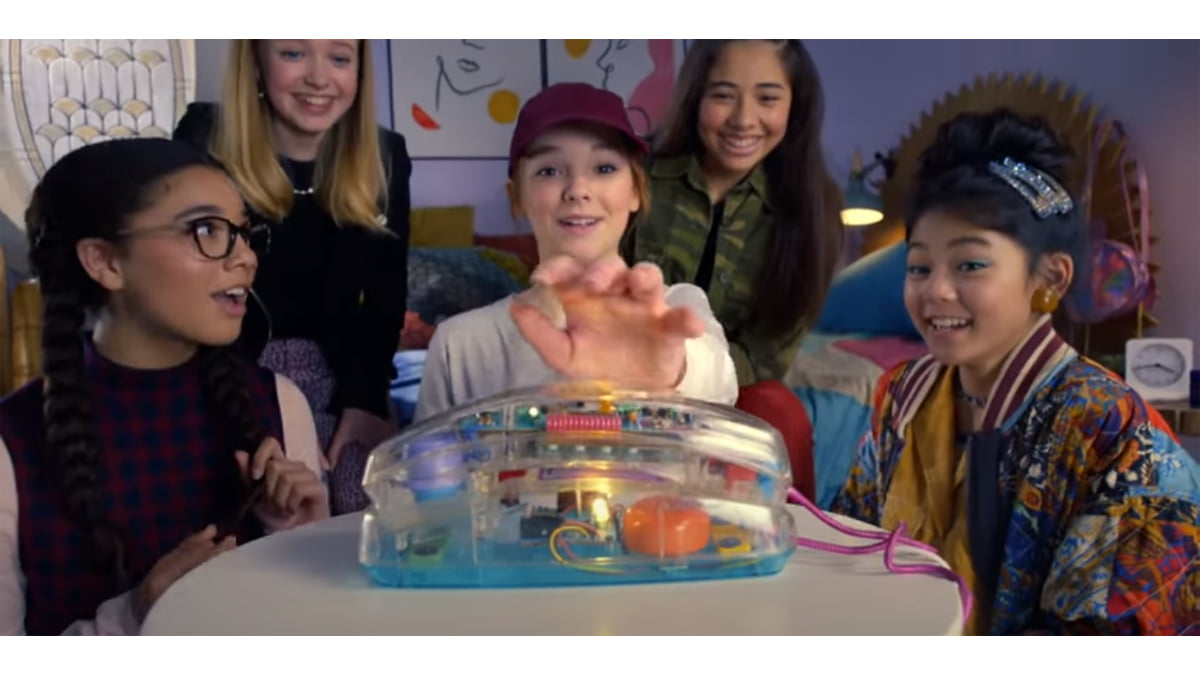 Like many elementary school-aged girls of the ’90s, I went through a hardcore Baby-Sitters Club stage between the ages of eight and eleven. I was a “Stacey Girl.” I think I admired her mastery of math (which was harder for me) and her effortless cool New York style. As the years and books went on, I related more to Mallory minus a house full of siblings. By the time I had aged out of Ann M. Martin’s beloved series, I had made it somewhere in the 80s on book count. (I became aware of the addition of Abby, but wasn’t still reading when she came along.) Still, the books were an important part of my childhood featuring girls from every personality type and interest area—alas, in middle school, most of the characters would have belonged to different social groups—who were savvy enough to run their own business and supported each other through a number of challenges all presented in a very kid-friendly way. Since a lot of families are still at home more than usual now anyway, I decided to check out the Netflix adaption of the book series, curious if such a dated series would still hold up for a new generation.

WARNING: The remainder of this article contains spoilers for The Baby-Sitters Club Season One.

There are certainly differences, but I feel that they add to the series rather than harm the nostalgia factor. The books were always written for a younger age group, so the social issues and peeks into middle-schooler life was always portrayed in a very G–PG sort of way. The newest television adaption caters a bit more to the age ten and up crowd. The Claudia of the books never would have created artwork inspired by “menstruation” and the plotline where Kristy gets her period for the first time at her mom’s wedding reception was not part of the books. Karen Brewer, Kristy’s eventual step-sister, never held a wake for any of her dolls, but as an adult, I can admit that a precocious enough kid like Karen might do just that. It’s not that the books didn’t feature an array of serious topics because they did (including divorce, blended families, remarriage, diabetes, mono, death of a family member, loss of employment, and racism). They also had charges with challenges like childhood cancer and hearing impairment. It’s amazing what all they covered in such an accessible way, but there are also additional topics that middle schoolers of today face, and bringing those to the update is important too.

The series features less of the babysitting jobs (unless plot specific) and more of the girls’ personal issues. Given the shorter length of the episodes and the challenges of a cast full of minors and the legalities of labor laws involving minors, this makes a lot of sense. The cleverest adjustment might be the explanation of the iconic landline that was used as the business line for club meetings. How do you explain that in an era where every middle school kid has a smartphone? It was easier than I anticipated. Claudia’s family has an unused landline as a perk of her sister’s significant internet package and the clear phone that was such a ’90s icon was a vintage Etsy find. Mary Ann also mentions using Google Docs for scheduling and Stacey pulls in targeted social media advertising for the club.

The cast has also diversified a bit more too. Of the first five babysitters the books featured, Claudia was Japanese-American, but everyone else was white. This time around, Mary Ann and Dawn are both played by young women of color, giving the cast more diversity than the books they are based on. Their charges and the parents of their charges also feature more actors and actresses of color being brought in for characters who were originally described as white. One of Stacey’s regulars, the Johanssens, are one example of this.

The Netflix series focuses on the first eight books and divides the first Super Special into a two-part arc. Here’s where we find the original five girls now:

Kristy Thomas (Sophie Grace): The club’s founder and president is still the tomboy with the acute business sense everyone remembers. A lot of her plotline revolves around adjusting to her mom Elizabeth’s remarriage to Watson Brewer (played by Alicia Silverstone and Mark Feuerstein). It may be my life experience or just the way the show has matured the storyline just a touch, but it’s far easier to note how Kristy’s bossiness control issues are because of her father abandoning the family. Her social group is shifting and changing, and Kristy doesn’t take to that so easily.

Claudia Kishi (Momona Tamada): The club’s vice-president is still a junk food and funky clothes-loving artist who struggles with school and having a genius sister. Her relationship with her grandmother Mimi is still as close as I remember, and the way the television series covers Mimi’s stroke is one of the more touching storylines. Mimi’s references to Manzanar was a detail I don’t remember from the books, but another well-placed addition.

Mary Ann Spier (Malia Baker): The club’s secretary still undergoes some of the biggest changes in her life as she starts to establish herself as a bit more grown-up than her widowed father realizes. Richard Spier (beautifully portrayed by Marc Evan Jackson) has his strictness softened by the fact it’s more obvious here that he was just struggling with the anxieties of being a widowed parent for almost all of Mary Ann’s life. Here, the only reason Mary Ann wearing braids was a thing was because it was the only hairstyle her mom had taught him to do before she passed away when Mary Ann was 18 months old. The bratty Jenny in Mary Ann Saves the Day is replaced with Bailey, a transgender girl that Mary Ann has to call 911 for when her fever spikes dangerously high. Mary Ann ends up calling out the medical staff when they misgender Bailey, emphasizing how important it is for Bailey to be recognized as a girl. It’s a storyline that didn’t exist in the ’90s for children’s books but brings the baby-sitters into the social matters of today.

Stacey McGill (Shay Rudolph): The club’s treasurer is still New York chic and dealing with her diabetes diagnosis (although Stacey now has an insulin pump instead of the finger pricking tests with insulin shots from the books). She also still has a tendency to develop crushes on boys way too old for her, like Kristy’s brother Sam and a lifeguard at Sea City. Her story is updated with a cyberbullying aspect to her medical condition and a lot more discussion about how hard the period was before her diagnosis, including her parents worrying that she had an eating disorder.

Dawn Schafer (Xochitl Gomez): The alternate officer of the club might have the largest number of shifts. This newer take on Dawn has her involved in not just environmental issues, but social issues as well. Her clothing is a bit edgier than the Dawn of the books, and her brother Jeff is nowhere to be seen. Her father is also happily in a same-sex relationship while her mother is now the niece of “Morbidda Destiny” as Karen calls the Brewer’s neighbor, whom she believes to be a witch. Dawn still works as being a different friend to Mary Ann than Kristy is, but important in her own way. She has a little more spunk and assertiveness than her book counterpart, but she works well with the other characters because of it. Her mother and Mary Ann’s father are still rekindling their high school romance, much to the delight of the girls and fans alike.

Overall, the series is well done and should be a nice nostalgic trip for the original fans, but a show that tweens of today should be able to enjoy as well. The material has been updated, but not turned into something so edgy that the girls seem like CW teenagers with plotlines that keep trying to outdo themselves for how outrageous they can get. This is exactly what an updated adaption should look like. With so many books to draw from, the only thing that will keep this show from being able to cover everything is the fact that the cast, unlike the book characters, can’t stay permanently frozen in the eighth grade forever.

The Baby-Sitters Club is now streaming on Netflix.

Last Chance to Win Our Monster in Paris Prize Package!