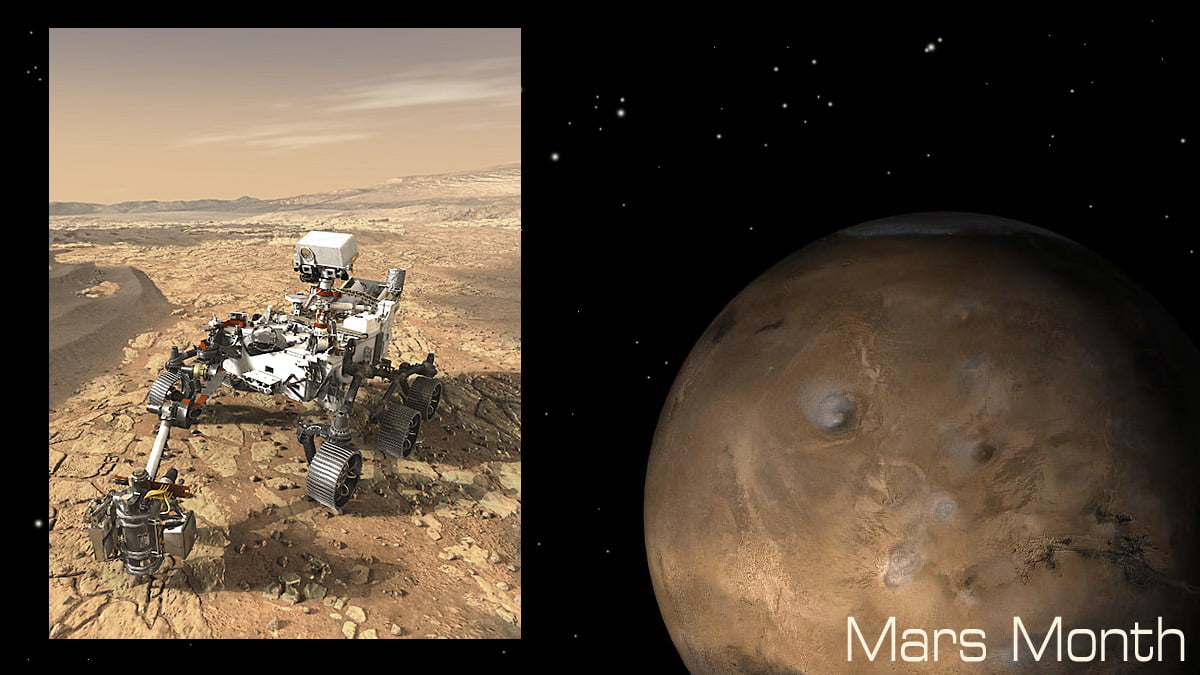 Throughout July, GeekMom prepared for the launch of the Perseverance rover with Mars Month, a month filled with Mars-themed content: Be sure to follow the Mars Month tag to find all of that content in one place. Today Melanie discusses the science behind how NASA picked the landing site for Perseverance.

We’re going to Mars! This morning (hopefully) NASA is going to launch the Mars Perseverance Rover, which is due to land on Mars in February 2021. This is a mission like no other, and a lot of care was taken to find just the perfect landing site for the rover. With a $2.4 billion price tag on the building and launching of the rover, they wanted to give the mission every chance for success. That includes landing the rover safely and making sure there were the right conditions for it to find and collect data. But how did NASA pick the landing site for the Mars Perseverance Rover, when the planet is 69.5 million miles away? They used remote sensing technology.

Remote sensing is a way to observe things and take measurements when you aren’t there to collect data in situ, or in person. Here on Earth, we’ve used remote sensing to make maps, predict the weather, track climate change, and study the ocean floor. We’re getting better at it all the time, and we’re constantly developing new technology. Every mission we’ve done to other planets involves remote sensing. We use the information sent back to us from probes and orbiters to form hypotheses about the planets, to map their surfaces, and to share beautiful images with people on Earth. From a planet’s orbit, we can now tell what the rocks on the surface of that planet are made of by looking at the wavelengths of light those rocks reflect. This allows us to see where water might have been present, and where life might have developed at one point in history. That is exactly what NASA scientists were interested in when they started to plan the Perseverance mission.

Because Perseverance is an unmanned robotic rover, a vital part of NASA’s prelaunch procedure was to find a safe landing spot with few travel hazards and a wealth of scientific data for the rover to sample, test, and record. For the site to be viable, it had to allow for the rover to accomplish the four main objectives of the mission. Geologically, the site should be diverse, showing signs of the different processes that formed it. The site should be astrobiologically interesting, to help scientists look for signs of ancient life. There should be enough suitable material at the site for the rover to collect and cache in the hope it can be collected at some point. And finally, the site should contribute to the knowledge that will allow human travel to Mars.

Fortunately, remote sensing technology has made it possible for us to visit planets in our solar system without ever setting foot on them. The Mars Reconnaissance Orbiter, which has been collecting data from Mars since 2006, has three specialized cameras on board that allow us to see the red planet like we never have before. The resolution of these cameras is so fine that the resulting images are like works of art. Yet they are so much more than that.

The Compact Reconnaissance Imaging Spectrometer, or CRISM, and the High-Resolution Imaging Science Experiment, or HiRISE, both send back images that can be processed by scientists so they can see what minerals are present at a certain site, where those minerals came from (whether on the surface or brought up from beneath the surface by volcanism or impacts), and if those minerals are the types that are present where there is or was water, like clays and carbonates. This is done by examining the wavelengths of light these minerals reflect (software is used to divide the image into bands of different wavelengths, so these things can be seen easily). Below is an example of an image from CRISM, with bands of reflected light set to be different colors so scientists can see the difference between various minerals. In this case, yellow is olivine, blue is pyroxene.

And below, here is an image from HiRISE, where its high-resolution imagery helped scientists discover lava coils on Mars for the first time. I highly recommend looking at other HiRISE imagery. The hi-def pictures will take your breath away.

The third camera, the Context Camera, or CXT, takes images that are intended to be used as a background for the information gathered by the other two instruments and is useful for seeing the big picture. The table below gives more information about each of the cameras and what they are used for.

All three of these instruments remove much of the guesswork from what’s going on at particular sites on Mars. In short, we’ve never had better access to potential landing sites than we do now. NASA was in a position to make a really educated decision as to where to land the new Mars Perseverance Rover.

Scientists met several times to discuss over thirty possible sites, dissecting them to see which sites would offer the best chance to achieve the mission objectives. Eventually, it came down to three final sites: Northeast Syrtis, Jezero Crater, and Midway. You can see below that these sites are relatively close to one another, and Midway was named such because it is mid-way between the other two sites. It was a last-minute addition to the site list.

All three of these sites had pros and cons that NASA considered, but it was very hard to choose between them. In fact, if it hadn’t been for the detailed information scientists were able to get via remote sensing, the decision wouldn’t have been clear at all.

Northeast Syrtis (below) had minerals that suggested past habitability, and there were clear signs of the processes that formed the area. But it was decided that it would take too long for scientists to accurately classify some things there that were harder to make out—if they were able to make them out at all.

Midway (below) could be reached from either of the other two sites, which made it an interesting secondary possibility. It holds some interesting possibilities for potential subsurface life, but the origins of some of the rocks were deemed too uncertain to make it the primary site.

This left Jezero Crater (below), which was the site ultimately decided upon to be the landing site for the Perseverance rover. It had scientific characteristics and points of interest pertinent to the mission objectives, as well as terrain on which it would be safe for the rover to land and operate, increasing the odds of mission success.

It doesn’t take a highly trained scientist to notice Jezero Crater has a very interesting feature on its west side—a delta from an ancient river that flowed into what scientists believe was a lake that filled the crater. One of the landing site criteria was that the geologic processes that made the site had to be discernible, and while there is some disagreement about the age of these features in Jezero, it’s well agreed that this delta was formed by an ancient river. Because deltas on Earth are known to be very rich in nutrients and organics, the building blocks of life, and so the same is thought to be true on Mars. Upon closer examination, teams of scientists found clays, carbonates, and possible hydrosilicates, all of which are good indicators that signatures of organic matter might be found at the site. Jezero has been deemed safe for the landing and operating of the Mars Perseverance Rover, and there are a wide variety of rocks and minerals here for collecting. It’s also close enough to Midway where the rover can travel out to that site as well. 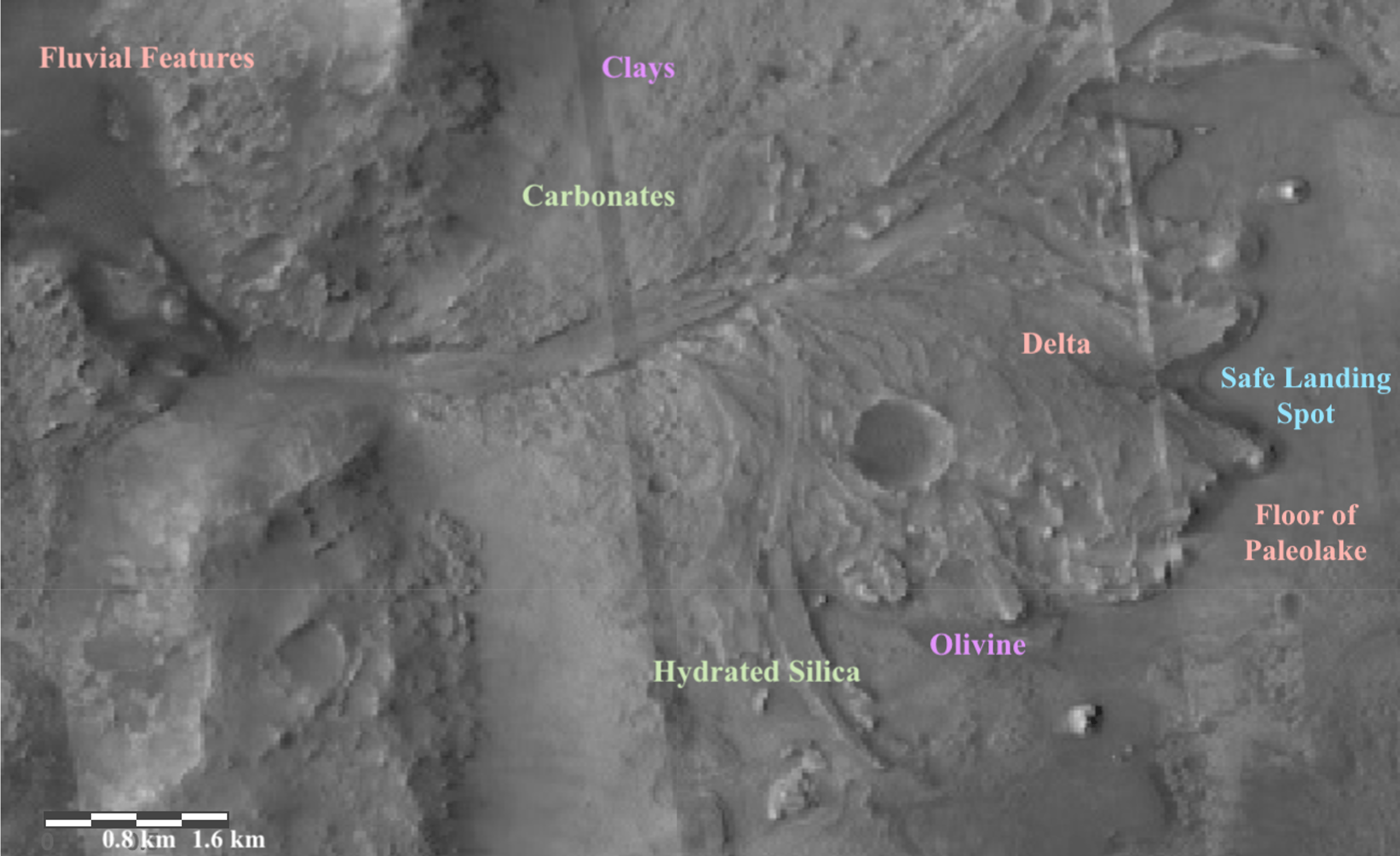 Planning a mission to a planet we’ve never seen in person always has risks involved. But remote sensing makes it possible for scientists and engineers to make these plans with a clearer vision than ever before, and it takes a lot of guesswork out of the planning phases. When the Mars Perseverance Rover lands on Mars next year, we can learn even more about the planet using a different type of remote sensing, with the instruments on the rover itself! 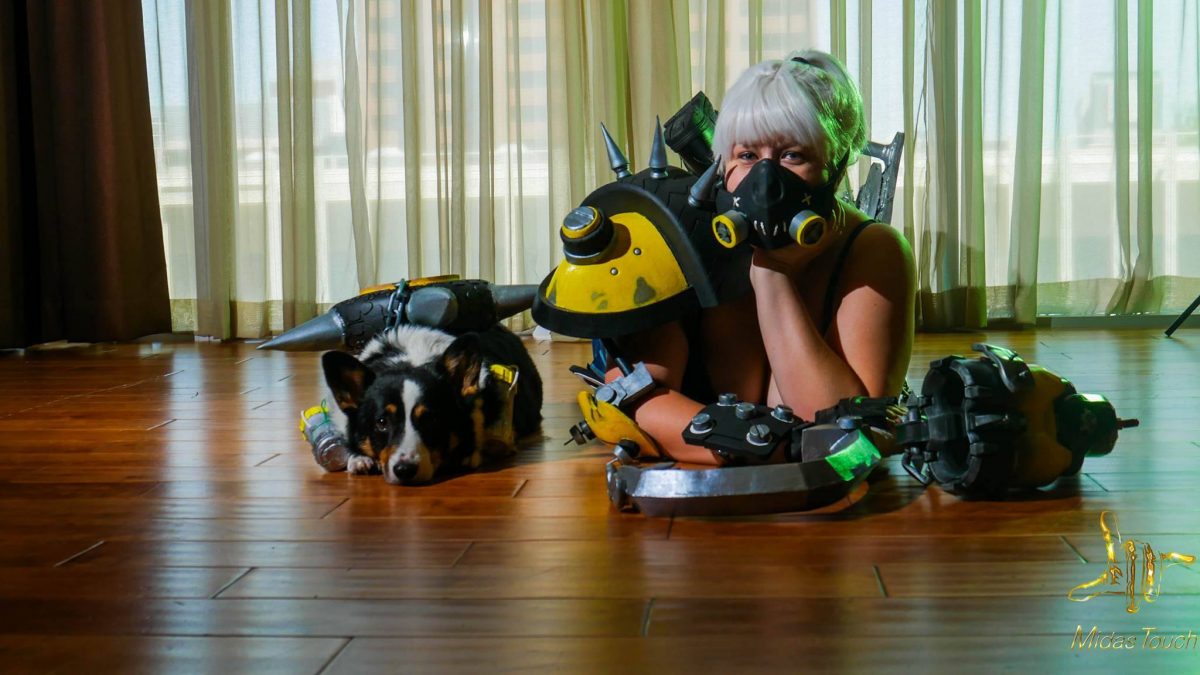