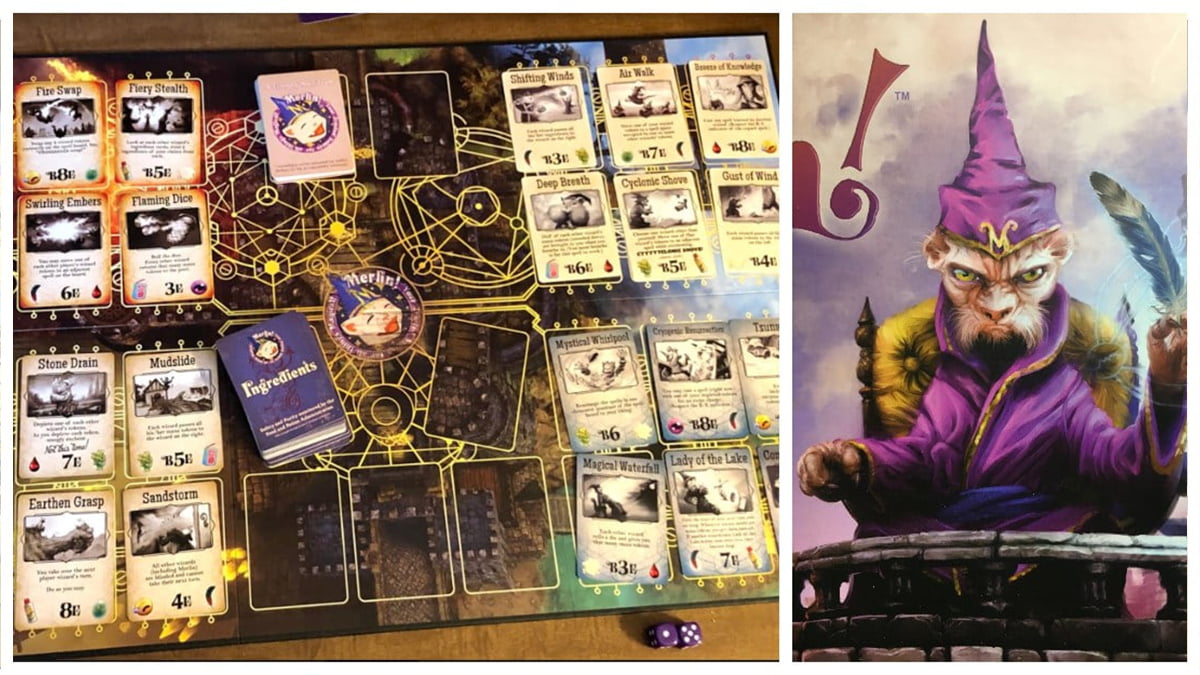 We have not been playing as many board games during these past few months as we are usually wont to do. Aside from the odd game of Tiny Towns or Cribbage, our brain capacity at the end of a day of home school (or work from home or summer camp at home) has been less than stellar. More at the Animal Crossing level… or Tiger King. One game that occupied some time for us, however, was Kill Merlin, a card-based board game made by a family company in California. You have to love any game that includes the warning “Game involves treachery” and cautions about the quantity of Orc Boogers within.

Kill Merlin was invented three years ago by Dave Schuman, along with his sons Zev and Zane, who were 14 and 8 at the time. Years of playing their favorite games, such as Dominion, Ticket to Ride, and Seven Wonders, along with a yearning to create, led to a family collaboration that resulted in Kill Merlin. The Schumans were then able to enlist their friend Scott Werner to help get their artistic vision onto cards. You can read their story on Dave’s blog, and discover the questions that plagued them, such as the intensity of hellfire, and whether Orc Boogers or Troll Snot would be the most efficient use of mucus.

What Is Kill Merlin

Merlin is the most powerful wizard in the land and has a monopoly on all magical ingredients. As long as Merlin is around, no other wizard can get a look in. All others must hide away and follow the whims of the great and powerful one. The only way to come out of the shadows is to Kill Merlin. A secret combination of 4 spells, when cast together, is the only thing that can bring him down. You must thwart your fellow wizards on your way to usurping dominance. 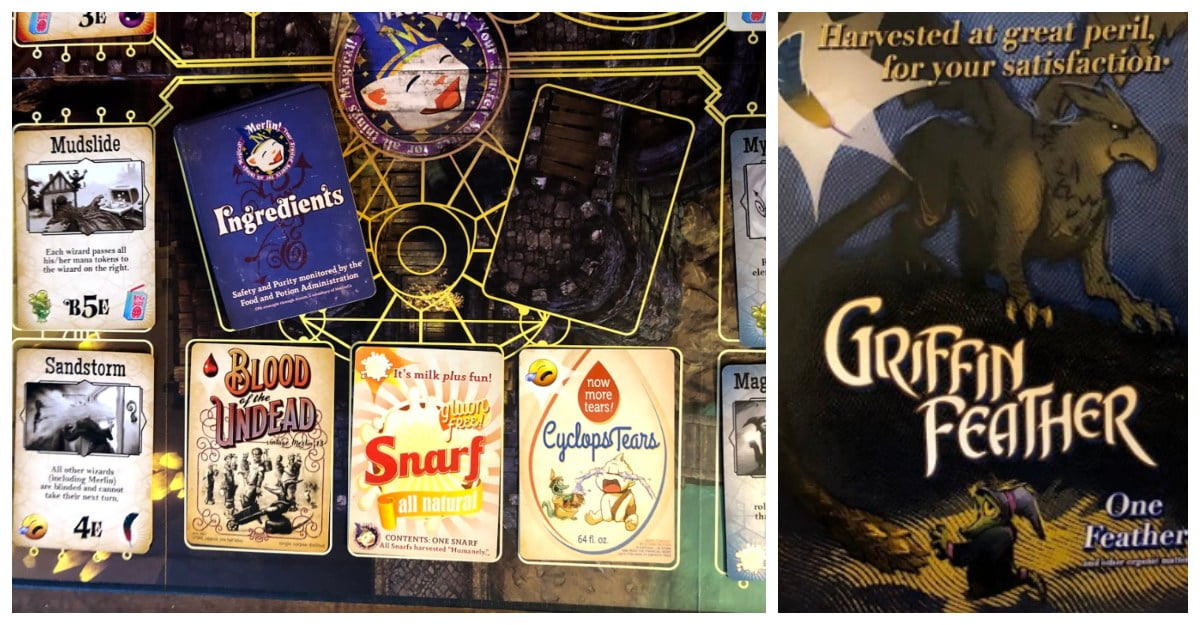 There are five self-proclaimed “easyish” steps to set up the game before you play, much of which is the shuffling of the spell, ingredient, and Merlin cards. Six of each spell card should be placed onto the corresponding quadrants on the board, for a total of twenty-four spells in each game. Each player should be given five mana from the pool, one secret formula card, and three ingredients cards, both of which should be face down. Three further ingredients cards should be placed face-up on the revealed ingredients spots on the board. When there are more than one of the same kind of ingredient cards revealed, discard all three and reveal the next three cards until there are no duplicates. This rule also applies throughout the game whenever revealed cards are taken.

The whole game is a series of special cards, and so there are many components to consider. 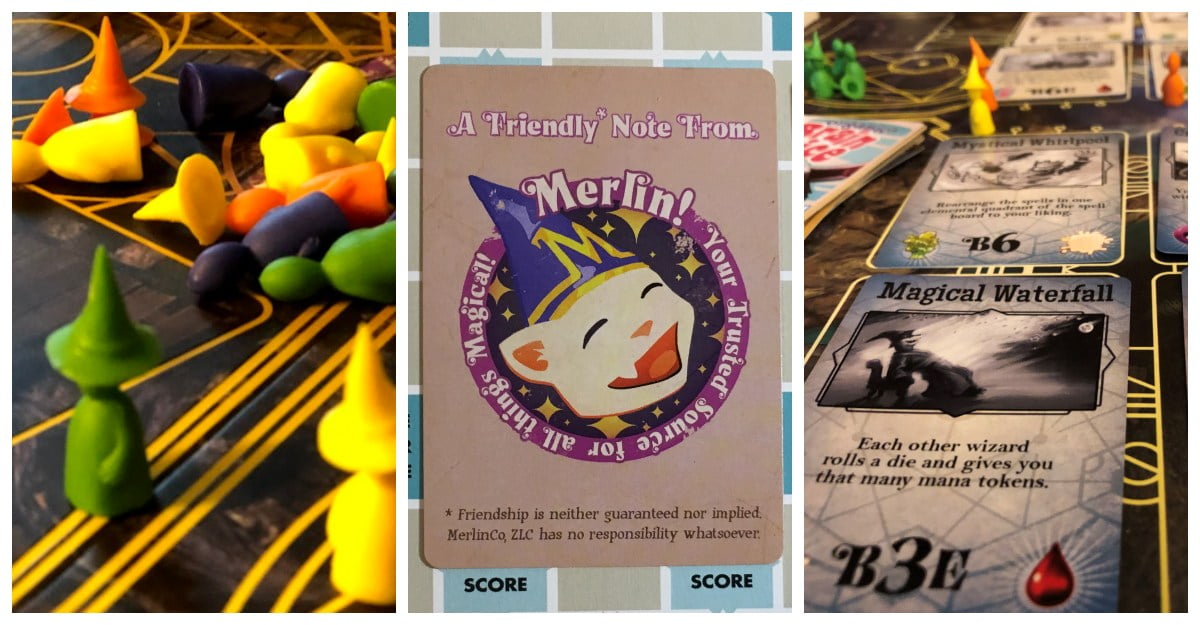 Merlin Cards can be either mean or kind, more often than not they are mean. Merlin takes his turn after each round, so you can always be guaranteed to hear from him one way or the other. Some of the cards are marked “Don’t Forget,” which means they apply to future rounds as well, and some are simply one and done.

Secret Formula Cards are the cards that show you which combination of spells you need to defeat Merlin. These cards show you the location on the board of the spells you need. The spells in those locations will vary every time you deal a new game.

Ingredient Cards It’s a patriarchal, capitalist world we live in, so you will need to purchase ingredients from Merlin in order to defeat Merlin. You get to purchase up to three ingredients per turn but have a five-card hand limit. Blind picks are cheaper than revealed picks, and there is a wild card called a “Mimic” which can take the place of any ingredient.

Wizard Tokens show whether your spell is charged or depleted. You can use the tokens or the little wizards with hats, both perform the same function. If a spell is charged you may cast the spell, if it is depleted, then it’s just knowledge. Spells do not have to be charged in order to kill Merlin, he is killed with knowledge alone—well, knowledge and mana.

Each turn follows the same formula until someone can kill Merlin.

The intricacies of each of these steps are laid out exceptionally well in the book that comes with the game. It’s very much like Munchkin, in that it can confuse the heck out of you for a few go-rounds, and then all of a sudden you just know what you are doing, and it is awesome, and you kick all the doors down. In Kill Merlin, you will get into the swing of things after a round or two, but don’t expect the strategist in you to really get going until you’ve killed Merlin a few times. The game can take between 30 and 120 minutes; we have yet to play a game in less than an hour. 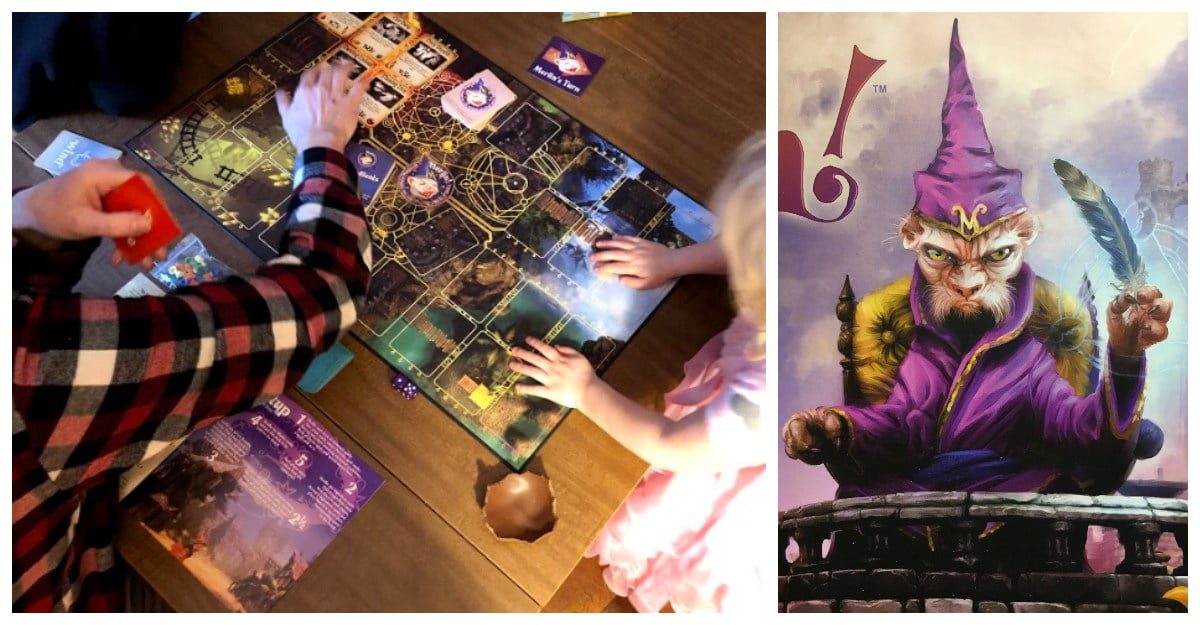 You win the game by learning the four spells, unique to your hand, that will defeat Merlin. You need to have a wizard pawn on each of the spells, though they do not need to be charged, and you need to have 20 mana tokens. When revealing your secret formula card, you must say “And with that, I have killed Merlin!” following which you may mock your opponents incessantly.

Should You Buy Kill Merlin?

If you like family board game companies, spell casting games, card games, board games, and the like, then yes absolutely. Kill Merlin is a fun game, with familiar components but also some new and interesting dynamics. The artwork is excellent, and the theme is incredibly fun. We played with our kids who are ten and eight, while the game is recommended for ages thirteen and up. Our ten-year-old loved it, while our eight-year-old lost interest. This is usually the state of things in our house. I find that with most games like this, the age recommendation needs to be based on your family a great deal more than on the recommendation. If you have impatient kids, this may be a tough one to learn, but once they conquer it, they will love killing Merlin. Kill Merlin is currently available on Amazon, but I would check your local game store first. 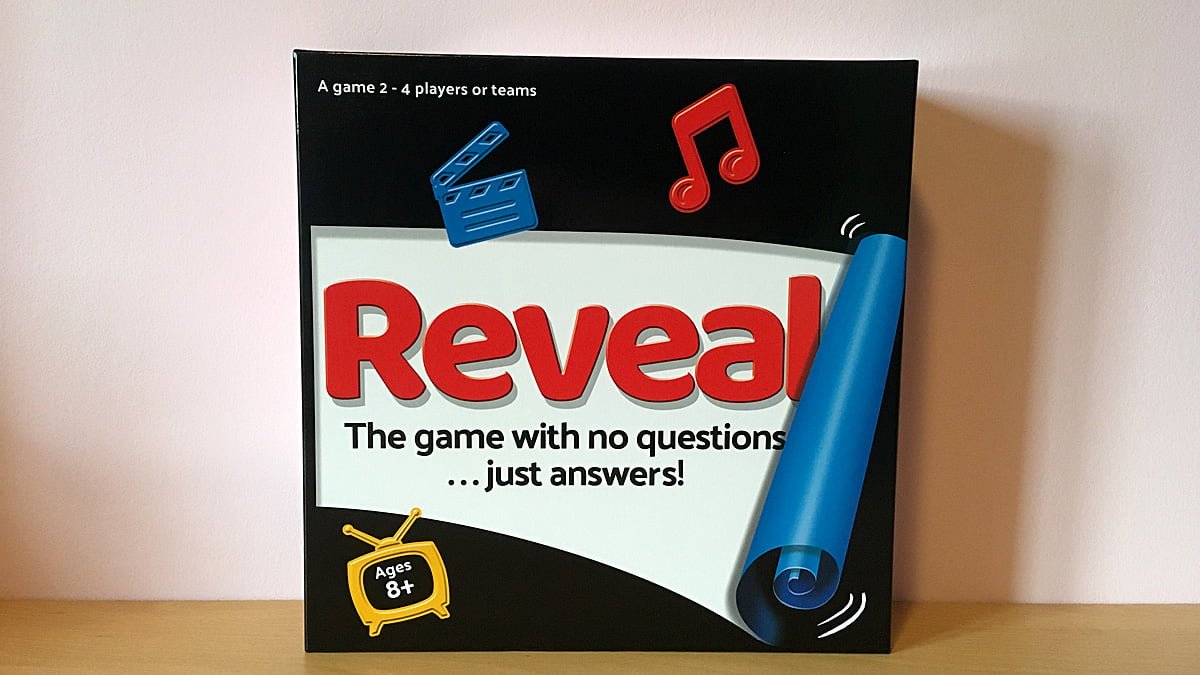 Family Games for the Holidays: ‘Reveal’

Give the Gift of STEM With UBTECH’s BuilderBots: Overdrive Kit