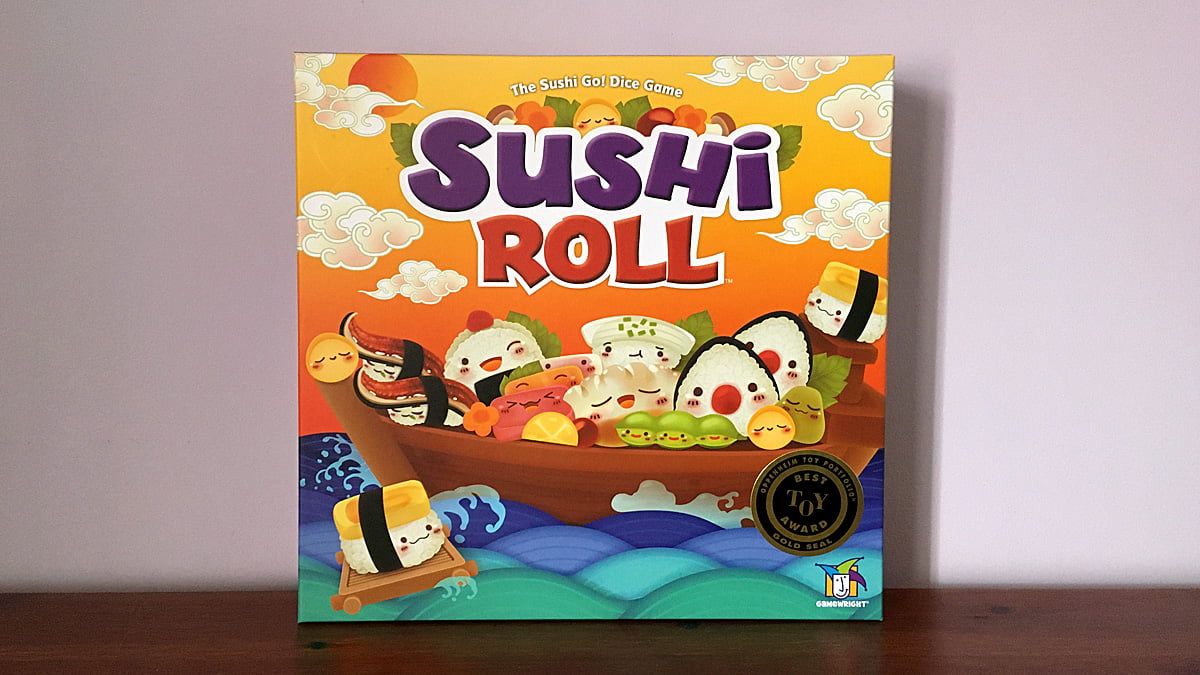 What is Sushi Roll?

Sushi Roll is a dice-rolling game for two to five players from the people who created Sushi Go. Players select sushi dice from the conveyors that move around the table, attempting to collect sets of items and score points. It is recommended for players aged eight and up and takes around 20 minutes to play.

The components of Sushi Roll are all great quality. The tokens are made from thick cardboard printed on both sides and the Trays and Conveyor Belts are also made of the same thick, high-quality board. Everything is colorful and fun, and the dice are lovely to hold with cute, engraved designs rather than stickers on their sides. The use of plastic is very minimal with only a few baggies included for keeping the different components organized.

The one let down is the packaging. The box is easily twice as big as it needs to be with lots of wasted space inside which makes it take up more space in storage and contributes to it being less environmentally friendly than it could otherwise have been.

How to Play Sushi Roll

Every player receives a Tray and places it face-up in front of them. They also receive two Chopstick Tokens and three Menu Tokens. All the remaining tokens are separated into piles and placed in the middle of the play area.

All the dice are placed inside the Dice Bag and shaken. All the players then randomly take dice from the bag and place them onto their Conveyor Belt Board. It does not matter which side is face-up. The number of dice each player should take is dictated by the number of players in the game:

At the beginning of the first round, the player with the red-bordered Conveyor Belt Board goes first. Play then moves to the left until every player has had a turn. On their turn, each player performs the same two steps in order.

First, they may use any number of Menu and/or Chopstick Tokens.

To use a Menu Token, the player returns it to the shared supply pile. The player may then select and re-roll any number of dice from their Conveyor Belt Board before placing them back on the board. The player may do this as many times as they wish on their turn, provided they have a Menu Token to spend.

As with a Menu Token, to use a Chopstick Token the player first returns it to the shared supply pile. They may then select one die from another player’s Conveyor Belt Board and swap it with their own, without changing which face is face-up. The player may do this as many times as they wish on their turn, provided they have a Chopstick Token to spend.

Once the player has spent and many Menu and/or Chopstick Tokens as they want, they choose one die from their Conveyor Belt Board to keep and move it from the board to their Tray without changing its face. A detailed description of the different types of dice is below at the End of Round Scoring section. This ends the player’s turn and gameplay passes to the right.

Play continues like this with the Conveyor Belt Boards sliding around the players to the left until no dice remain on them.

Once the Conveyor Belt Boards are empty and cannot be passed along again, the round ends and scoring can begin. Players are scored based on the dice in their Tray at the end of the round.

Wasabi: Wasabi on its own it worth nothing, but placing a Nigiri on top of a Wasabi triples its points value.

Pudding: Take a Pudding Token from the supply. Puddings are only scored at the end of the third and final round.

Menu: Menus are worth no points. By selecting a Menu Die, a player gets to take Menu Tokens from the supply equal to the number of icons on the die.

Chopsticks: Chopsticks are worth no points. By selecting a Chopsticks Die, a player gets to take a Chopsticks Token from the supply equal to the number of icons on the die.

Multiple sets of any icons can be scored.

Once everyone’s dice have been scored, all the dice are placed back in the Dice Bag and shaken up and a new round begins. In a three-player game only, the Conveyor Belt Boards are slid to the left at the end of the round in order to ensure that the starting player changes.

After the third and final round, final scoring takes place. This is largely the same as the scoring of the previous two rounds but now includes puddings, menus, and chopsticks.

For the menus and chopsticks, one point is awarded for every set of two unused tokens in any combination.

The scores for this round and both previous rounds are added up and the player with the highest score wins.

I was excited to play Sushi Roll because my family and I love Sushi Go, the original card game it is based on. I really enjoyed this new variant, although I think on balance that I still slightly prefer the original.

The big difference between Sushi Roll and Sushi Go is that Sushi Roll adds in a bigger element of chance thanks to the frequent dice rolls. With Sushi Go, the cards remain the same as they are passed around the table and the only aspect of chance comes from which card another player takes for themself, but here, a Maki Roll die might change from a three to a one or vice versa on every turn. I liked this new feature but I found that my husband and son did not, preferring the more predictable nature of the cards. For obvious reasons, I haven’t been able to play with the other Sushi Go-loving members of my family and friends, and I’m curious to see what their opinions will be.

As with its predecessor, the artwork for Sushi Roll is adorable but having to condense this down onto the sides of dice rather than on cards does mean that you don’t get to appreciate it as much, although this is somewhat made up for by the large box art and instruction sheet. The components all feel great and are obviously high quality, particularly the dice which I loved playing with thanks to their smooth corners and bright colors. The boards are fun to use, with the trays reminding me of small menus and the conveyors adding a unique touch to the game.

In fact, it is the conveyor belt element that makes me feel that Sushi Roll is going to be great for parties. I’d love to see an expansion at some point that extends the maximum number of players above five because watching the conveyor belt boards sliding around the table was one of the most fun aspects of the game and picturing it with a large group just brings a smile to my face.

Sushi Roll brings a new element to an already popular game, helping to give it a whole new feel and making a familiar game feel like a whole new experience. While it will never replace Sushi Go which is destined to become a classic, Sushi Roll might well be a better choice for groups sitting around a table at a games night and it will add a whole lot of color, cuteness, and cheer to your game cupboard.