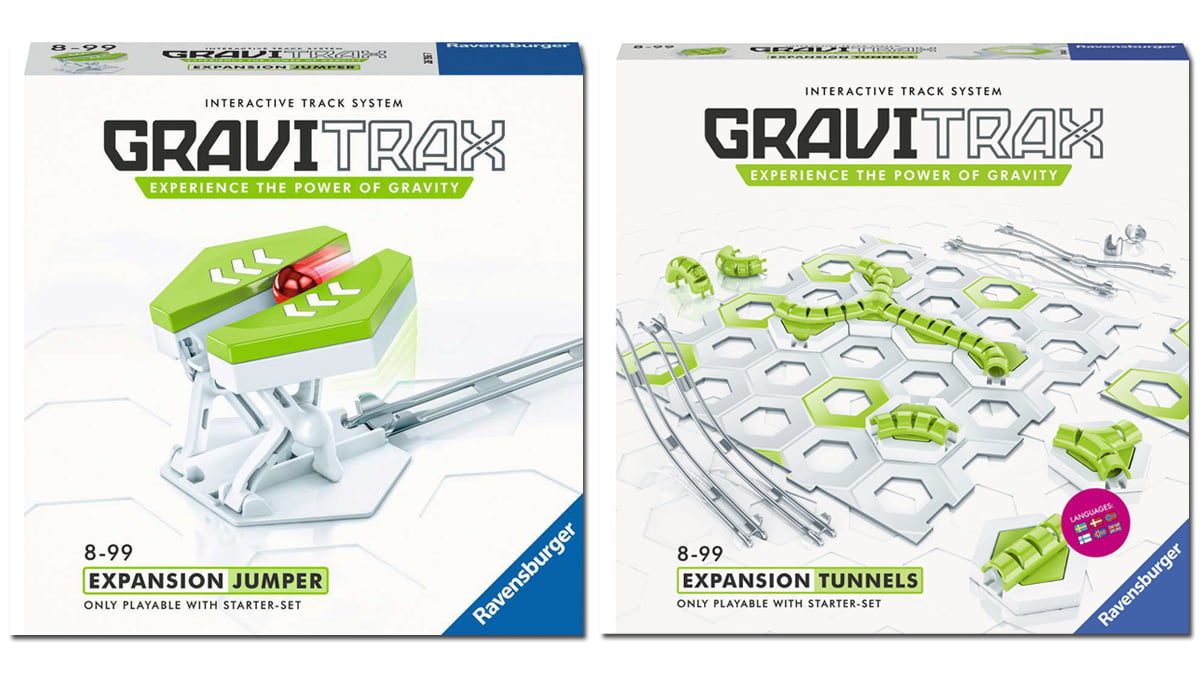 Gravitrax remains one of our favorite toy systems, and 2020 sees the release of yet more expansion packs. This time, we’re taking a look at the Jumper and the Tunnels set, the latter of which has become an instant favorite in our household.

The Jumper is one of the smaller Gravitrax expansion sets. Along with the Jumper itself, the set also includes six rails (1 large, 2 medium, and 3 small) and the customary instruction sheet that explains how to use the new piece and gives an example of a track built using it.

The Jumper is well-named because jumping is exactly what it does. The piece uses two spindly legs that remind me of an AT-ST from Star Wars and jump up when a ball touches the trigger on the top, carrying the ball up to a higher level. If a second ball comes along after the Jumper has jumped up, they continue along a second track built into its base.

The Jumper was one of the more interesting Gravitrax pieces to watch, but also one of the more finicky to actually use. If the ball is traveling too quickly when it reaches the Jumper, it is liable to hit the next piece of track as the Jumper raises itself, frequently knocking that piece out of alignment so the track design fails. We mostly fixed this by slightly lowering the upper level (or raising the Jumper itself fractionally), but it did cause some frustration nearly every time.

Using the rating system from my previous post about Gravitrax expansions, my son and I rated the Jumper:

The Tunnels expansion set instantly became one of our favorite expansions. While it is definitely one of the more expensive options, it includes so much that it has fantastic value for money. The extra cardboard base mats are especially useful as these allow you to spread your layouts over a wider surface area.

The tunnels themselves are very easy to use and incredibly helpful as they help to control your marbles. This is particularly useful if you need a marble to take a sharp turn at speed. Using standard hexagonal track pieces or rails, the marbles will often overshoot if going too quickly and fall off the track, the tunnels help them take these turns consistently without this happening. The two drop rails are also great at giving you a controlled start to your tracks and this allows you to build extra height into your designs.

Ok, the Tunnels expansion set isn’t the most visually exciting to build with—it actually hides the marbles away, as you would expect from the name, quite often. What it does is allow you to build faster and more complex tracks by giving you both extra space and more control over your marbles. In fact, this expansion is so useful I would happily consider buying multiple copies, despite it being one of the pricier expansions.

As the ratings suggest, I didn’t have much difficulty in deciding which of these two expansions I would buy if I had to pick just one. The Tunnels expansion wins hands down thanks to how much flexibility it adds to our layouts and how easy it is to incorporate.

The Tunnels expansion is easily my favorite of the Gravitrax expansions since the original expansion pack, and I would highly recommend you pick one up.

3 thoughts on “Yet More Gravitrax Expansions – Are These the Best So Far?”