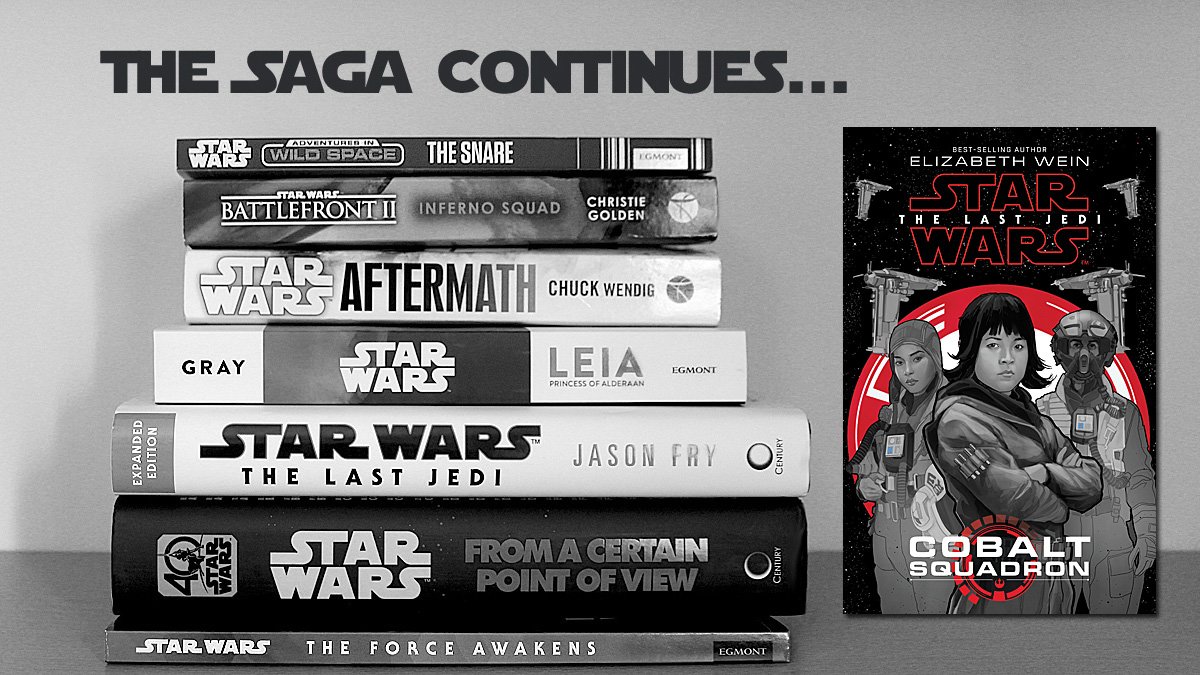 Originally published to coincide with the release of The Last Jedi, Cobalt Squadron by Elizabeth Wein is a middle-grade novel that follows Rose Tico during the weeks prior to the start of the film, exploring what she was doing while the events of The Force Awakens were taking place.

The book opens at the close of a Resistance reconnaissance mission to the Atterra system, a system comprised of two planets orbiting their star in the same path. General Leia Organa has heard that the First Order is blockading shipping lanes and has dispatched a single bomber (filled with probes instead of bombs) to discover the truth. The unusual planetary alignment of Atterra mirrors that of Otomok – the home system of Rose Tico and her sister Paige – so when a pair of Atterran refugees crash their transport into the ship’s open bomb bay and seek sanctuary during the mission, the two feel a strong sense of empathy toward their plight. The refugees bring with them a tale of horror and devastation, and the Resistance knows they have no choice but to act and try to help the people of this dying system. Rose and Paige are then thrust into the heart of a risky mission that might just trigger an all-out war.

Rose is absolutely the hero of Cobalt Squadron, even if she spends most of it thinking of herself as anything but heroic. In fact, she spends much of the story dealing with her own anxiety and insecurity. Rose fears being separated from her sister, worries about Paige being injured or killed during a mission, and is terrified that the jerry-rigged contraption she has invented on the galactic equivalent of the back of a napkin to keep her squadron safe will fail. She’s not the only character who is dealing with fear in Cobalt Squadron. The Atterran refugees are facing their own set of fears, as are the other members of Cobalt Squadron itself and their commanders. In many ways, Cobalt Squadron is a lesson on the many ways fear can manifest during difficult times and the ways we can choose to handle it.

I think it was this that helped me to enjoy the story more. I have suffered from anxiety disorders since my teens and when living with anxiety, it is easy to look at others and imagine that because we see them acting bravely on the outside, they are somehow better than we could ever be because we are held back by our fear. Rather, Cobalt Squadron shows us that everyone is experiencing fear and it is down to us to decide how we will either work to control it or let ourselves be controlled by it.

Cobalt Squadron is also a great book for those looking for STEM role models. Rose’s value to the Resistance as an engineer is clearly demonstrated in almost every chapter. Not only is she capable of running and maintaining her ship, but she can also devise new ideas and inventions and quickly teach others to use them. It’s easy to see pilots and fighters like Poe or Luke or Rey as the heroes of the Star Wars galaxy, but getting to see the importance of “background” characters like Rose shows that the Resistance really is a team and that team cannot operate without dozens of people like Rose keeping it up and running.

The relationship between Rose and Paige is perhaps the one area where I felt the story was lacking. The two don’t spend a vast amount of time together and I felt that I was repeatedly told how close their bond was rather than coming to understand that for myself. However, that didn’t stop the ending from landing a real punch to the gut.

Cobalt Squadron wasn’t my favorite Star Wars story, but that’s more to do with my personal genre preferences than anything “wrong” with the story itself. What it did do was give me a deeper appreciation for Rose Tico, a character I’ve so far been somewhat indifferent to – mostly because I didn’t know enough about her to really feel a connection. Coming out of this story I felt both that I knew her much better and also wanted to read more stories about her and the vital yet under-appreciated role she plays in the Resistance.

Check out more Star Wars novel reviews in our The Saga Continues column.

“The Curse of the Brimstone Contract:” A Steampunk Adventure, Chapter 21

Between the Bookends: 7 Books We Read in October 2021

2 thoughts on “The Saga Continues: ‘Cobalt Squadron’ by Elizabeth Wein”