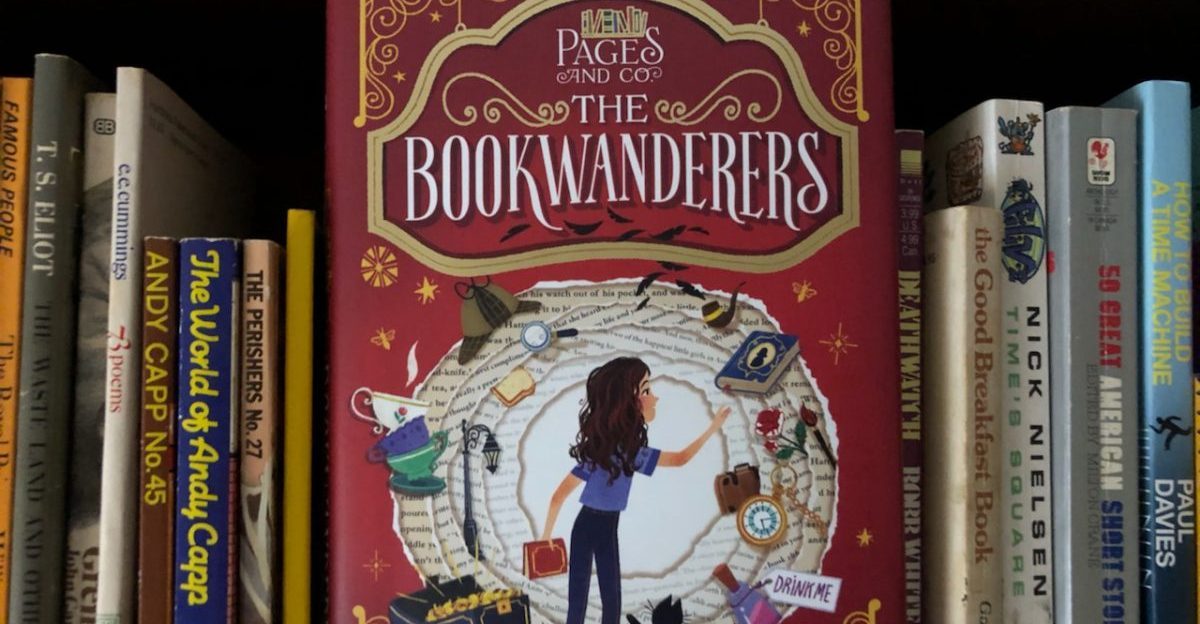 Every so often, a story comes along that draws you in completely, carrying you along for a wonderful ride. This is the only way to begin describing the encounter I had with the debut novel of Anna James, Pages & Co.: The Bookwanderers. In this book, the titular character literally gets carried away in a book. In Tilly’s world, libraries, book stores and other repositories of books, serve as thin places between our world, and the worlds created by the minds of authors. Certain people, with a proclivity for the written word, develop the ability to travel in and out of stories, interacting with the characters without leaving a mark on the story itself.

I have read many books about books. I have read many books about people who love books. I am currently reading a collection of short essays about the favorite bookstores of a selection of authors. I have read many books about people who can travel in books, such as The Eyre Affair, and Inkheart. It’s an idea that has always intrigued me. Where would I go if I could? Would I walk the great halls at Pemberley? Would I romp with Rupert in Nutwood? Would I dare seek out Vivienne and Narissa, or take a stroll through the Arctic with Bernadette? To be honest, I am probably more apt to join Mr Woodhouse for a quiet evening by the fire. Despite my own cautious nature however, I do so love reading about those who hop from book to book, from world to world, for the pure excitement of it.

First and foremost, Pages & Co.: The Bookwanderers was written by an author who loves books. An author who loves the book repositories of the world, be they for buying or borrowing. An author who loves stories, from conception, to reading, to re-reading. Her affection and respect for the written world is evident in every carefully curated sentence, every lovingly handled paragraph. If you didn’t want to live in a bookstore before reading this book, you certainly will when you are finished.

“Seb sat back with a dreamy look on his face. “You know when you walk into a bookshop and you see all those thousands of books lined up in front of you? That intoxicating feeling of knowing that behind each cover is a different world to explore, like thousands of tiny portals? That adrenaline rush just before you open a new book? The thrill of being surrounded by fellow book lovers? That is what fuels bookwandering, and it comes to life in bookshops.” “

Our story begins with 11 year old Matilda (Tilly) Pages, at home with her grandparents. Her home is the family bookstore, Pages and Co. and what a marvelous place to live it is. Replete with café, amateur pastry chef Jack, and Lizzy Bennett wandering the stacks. Tilly however, would probably rather live in a tenement than a bookstore, if only it could be with her mother, who vanished under mysterious circumstances many years before. Tilly, like many young bookworms before her, prefers the friends she has within the pages of the books around her, to those at her school. She is therefore delighted, though slightly alarmed, when those same characters begin stepping out of their books to have a chat with her in the bookstore. In no time at all, she discovers that she can also step into their worlds, and shortly thereafter brings along with her the boy from across the street, Oskar. Eventually Matilda and Oskar are introduced to the greater world of bookwandering, the Under Library, and the dangers and delights of having access to these fictional worlds. However a treasure and a trap awaits them within the pages. Tilly and Oskar must use their newfound knowledge, and abilities, to avoid the trap while gaining the treasure.

There are several stories running together in this book, and bookwandering is only the beginning. Tilly’s curiosity about her mother, her family’s legacy in the Under Library and beyond, what can fictional characters actually do and know, are all equally entrancing sub plots. There is also a great deal that James leaves open for future stories. I am about as delighted with the world she has created here, as I was the first time I walked down Privet Drive. 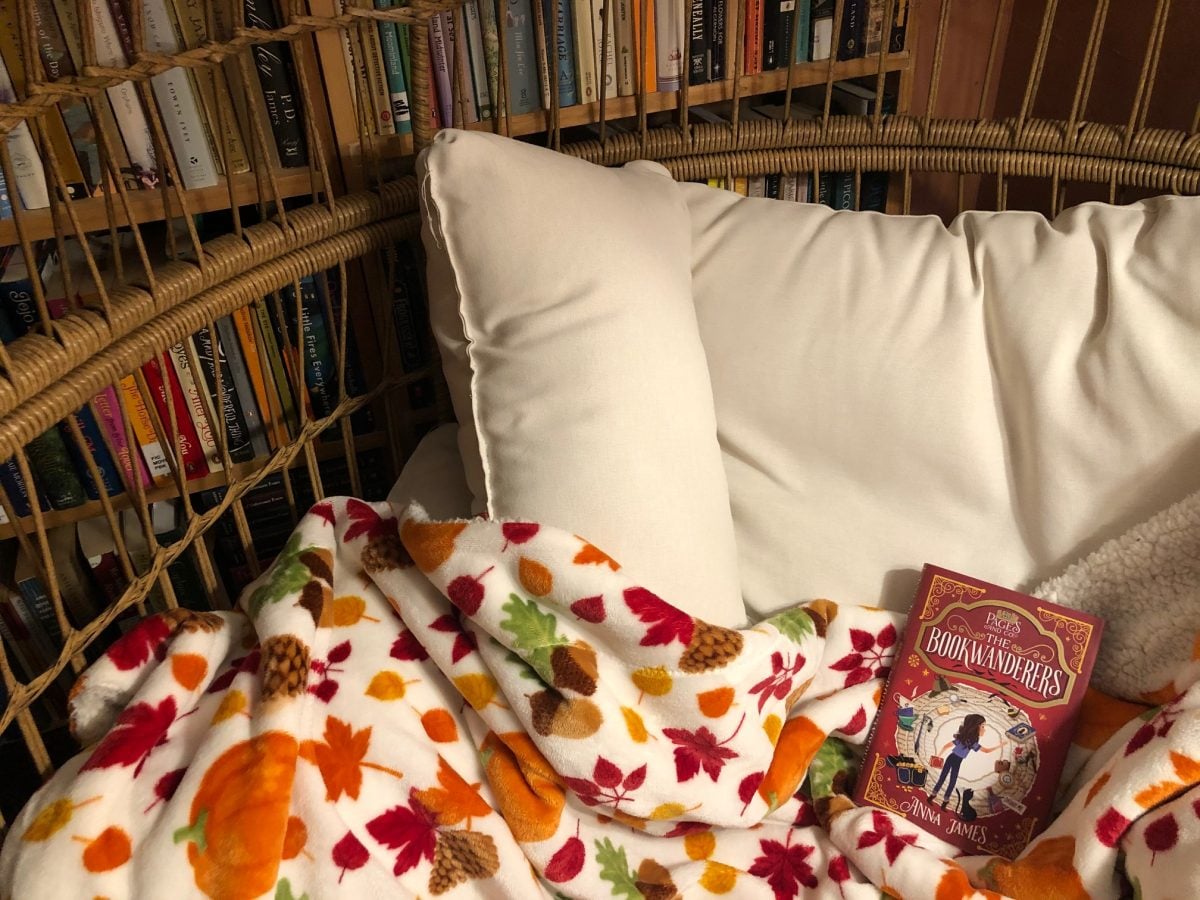 Pages & Co.: The Bookwanderers is one of those books that is best devoured on a cozy afternoon during some kind of rain or snow storm. It definitely does not lend itself to being put down, as the characters are as inviting as the story is compelling. In terms of the male/female character ratio, the book is nicely balanced. Of the major characters, Tilly talks to five male and five female. The male characters seldom talk to each other, and even then, there is always a lead female character present, and actively involved in the conversation. The conversations are rarely about anything but the action of the book, and when the conversation is about a certain man, well it’s an unusual conversation (and an unusual man) to begin with. Hermione Granger would be pleased with the dynamic of power herein. Yet Oskar is no mere sidekick, and has more of a tangible presence than you initially think he is going to get. His own ability to bookwander is explored much more in the second book, when it is inextricably linked to the women in his family.

The power of the written word is celebrated in this book. The role of the author is lauded but not elevated beyond the importance of the reader. The existence of thin places in the world, where you can cross over into fiction is just delightful. Given the amount of time I spend in bookstores, I am going to be looking around each corner more whimsically from now on.

Lest you think James gets carried away by the fantastical elements of her world, the lead characters are still portrayed as very real 11-year-olds, and are involved in some very real things for middle school aged children. They talk about being abandoned by someone for not being “best friend material,” they experience awkward silences when talking about cake. Tilly and Oskar are friends with no hint of romance, as a tale of two eleven year olds should be. In one sentence Tilly is breathing in the fresh air of Avonlea, while in the next, Oskar is falling to his knees and vomiting in reaction to the same thing. Much like the lead character, the whole story itself has one foot firmly in fantasy, and one in reality.

The first book is currently the only US edition available, but you can special order the second volume: The Lost Fairy Tales. The titles of the books are slightly different in the UK edition. The UK edition of the second book has such an amazing cover under the dust jacket, that I am inclined to purchase the UK edition of the first, just to get the artwork. The illustrations for both editions are done by the same person, Paola Escabar, but there are changes for the different markets, most notably that Tilly in the UK appears to be wearing a school uniform, whilst the US Tilly wears jeans. The artwork within the book is delightful, and the device used for noting when a person enters a book is whimsical, just distracting enough, and makes me smile every time. The series will be completed with a third book, though a publication date has not been announced. The series has also been optioned for television. I’m thinking Millie Bobbie Brown.

I received this book to review, but when I was about two thirds through I quickly ordered the second book in the series from my local independent bookstore.

A Magical Racquet Ride Can Take Kids on a Tennis Tour

Fund This! A Coding Story for Kids, Artful Dice, Sci-Fest, and Mermaids!

3 thoughts on “Adventures in Bookwandering”