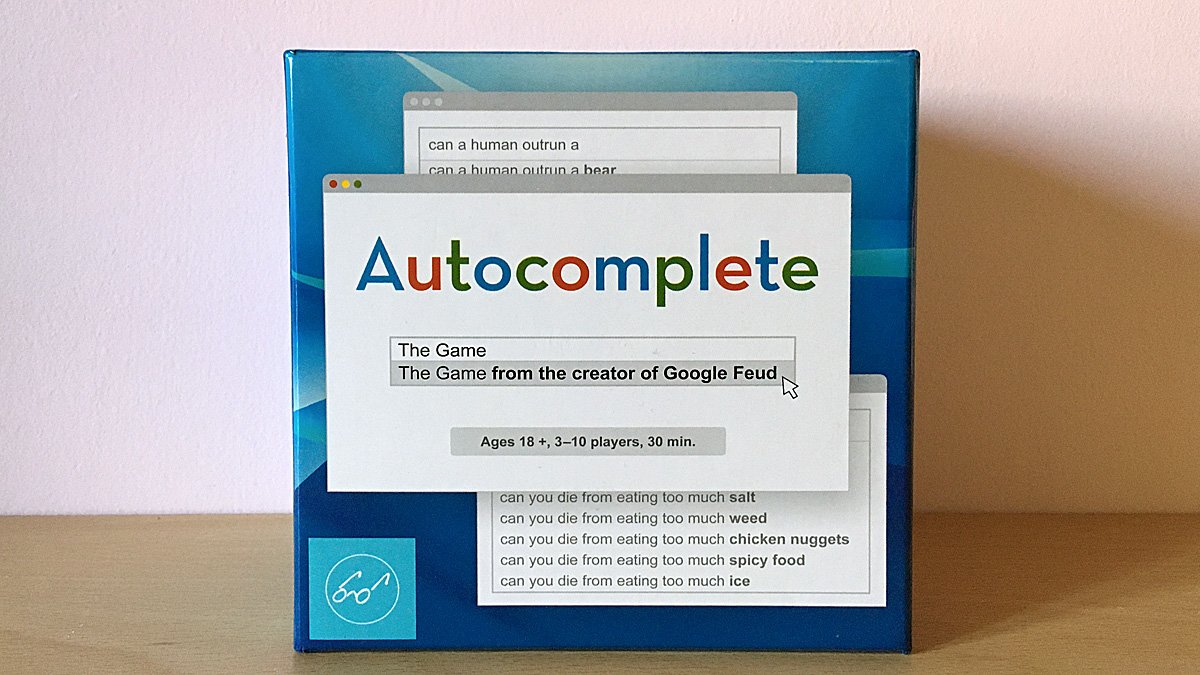 Autocomplete is a card game in which players must guess which words are the most commonly searched for online as part of a given question with players or teams earning points for making correct guesses from the ten options on the back of the card. Although aimed at adults (the box gives an age recommendation of 18+), we have comfortably played with older kids and teens. The game was created by Justin Hook, a freelance writer who has written episodes of Bob’s Burgers and other shows.

The Search Cards in Autocomplete are a nice size which makes them easy to read even in low light. Unfortunately, they are made from a very shiny cardstock which lends the game an unpleasantly cheap feel. The box itself is well designed and the components fit inside neatly with virtually no wasted space. That being said, the plastic sand timer does take up some room and means that the box is larger than it could have been if players simply used a stopwatch on their phones instead of including this extra item.

How Do You Play Autocomplete?

Autocomplete is designed to be played by two teams, however, if there are fewer than five people playing then it is recommended to play as individuals.

One player is selected to be the Judge for the first round; this person will change with each subsequent round. The Judge should have a pen and paper ready to note down points, but other than that, no setup is required.

The Judge draws a Search Card from the box and reads aloud the beginning of the Search Phrase. This will be something along the lines of:

Where can you sell a

Can a human outrun a

Can you die from eating too much

Once the Judge has read out the Search Phrase, they turn over the timer and the teams or players can begin to shout out answers. The Judge makes a note of any shouted answers that match the answers listed on the back of their Search Card, there is no penalty for shouting out incorrect guesses.

Once the timer runs out, the round ends. The Judge counts up the points earned by each team or individual player, announces the winner of the round, and then reads out all ten correct answers from the back of the Search Card.

The next round then begins with the role of Judge passed to either a player from the opposing team or the next player to the left if playing as individuals.

Autocomplete is played over ten rounds although this number could be adjusted up or down to make for a shorter or longer game. Once the final round has been played, the player or team with the most points is declared the winner.

There are several variant ideas for playing Autocomplete included in the instructions. These include:

Should You Buy Autocomplete?

Let’s start by talking about that age recommendation. The Autocomplete box states that it is suitable for ages 18 and up. This is for two reasons. First, some of the given answers are inappropriate for younger kids. The “How to tell if you’re a” card lists douchebag as an answer while “can I perform my own” lists labiaplasty—not necessarily a word you want to be explaining over the holidays with grandma listening in. Several cards have answers related to drugs, alcohol, and sex which may make some folks uncomfortable, however, the spirit of the game is wildly different from other adult games like Cards Against Humanity. There is no intention here to offend or be offensive; the cards are more factual than anything, so more liberally minded parents may well be happy to play with the whole family, which is why I’m including it here on GeekMom.

The bigger challenge for younger family members to join in with Autocomplete will be that under 18s are simply less likely to guess at many of the answers. I don’t know many young people who would guess the answer “membrane sweep” for “can I perform my own” or the answer “model on The Price is Right” for the “who was the first male” Search Card. But arguably, I’m not sure I would have ever guessed at those answers either!

Many of the cards in Autocomplete are totally kid-friendly and would make great conversation starters: Do fish know when they are wet? Who was the first female doctor? Do birds pee? This is a game that parents will need to think about in-depth before they buy it for their families, and the question of suitability will very much come down to individual opinions.

As for our family, we really enjoyed playing Autocomplete and found it to be great for a laugh when we wanted a fast and fun filler between longer games. The answers are often completely unexpected which leads to some interesting conversations, like who exactly is out there Googling: “Is duct tape safe for fish?” or “pictures of ugly feet.” I have played my own version of Autocomplete with my ten-year-old son where we would take a card and look at it together, trying to guess some answers before flipping it over to reveal what we got correct, but I wouldn’t let him join in a full family game just yet.

In my opinion, Autocomplete feels like a modernized version of Family Feud (Family Fortunes to our British readers), however, instead of surveying just 100 people, Autocomplete effectively “surveys” millions by using the most popular search terms. Of course, these can and will change over time so you can’t just do a sneaky search on your phone to cheat. The number one answer on the card for “how to get rid of your” was “period,” yet a quick Google search for comparison gave me “MP” as the top result—most likely because the UK has a General Election coming up in a few weeks.

Autocomplete is a game that is slightly more suited to New Year’s Eve with some friends than the dinner table after Christmas dinner, but would still go down well over the holidays with many families. It will also be a brilliant option to counter with whenever someone suggests a game of Cards Against Humanity by keeping the slightly inappropriate content but removing the offense for the sake of offensiveness element. Autocomplete is not the best game I’ve played this year, but for something fun to pull out when everyone just wants a laugh, it’s a great choice.

For games aimed more squarely at families this holiday season, check out our Games for the Holidays tag.

Winners Of The Hop Easter Giveaway!

Fund This! Fleming and John, Single-Use Monocles, and mDrawbot!

2 thoughts on “‘Autocomplete’: A Guessing Game for the Search Engine Savvy”