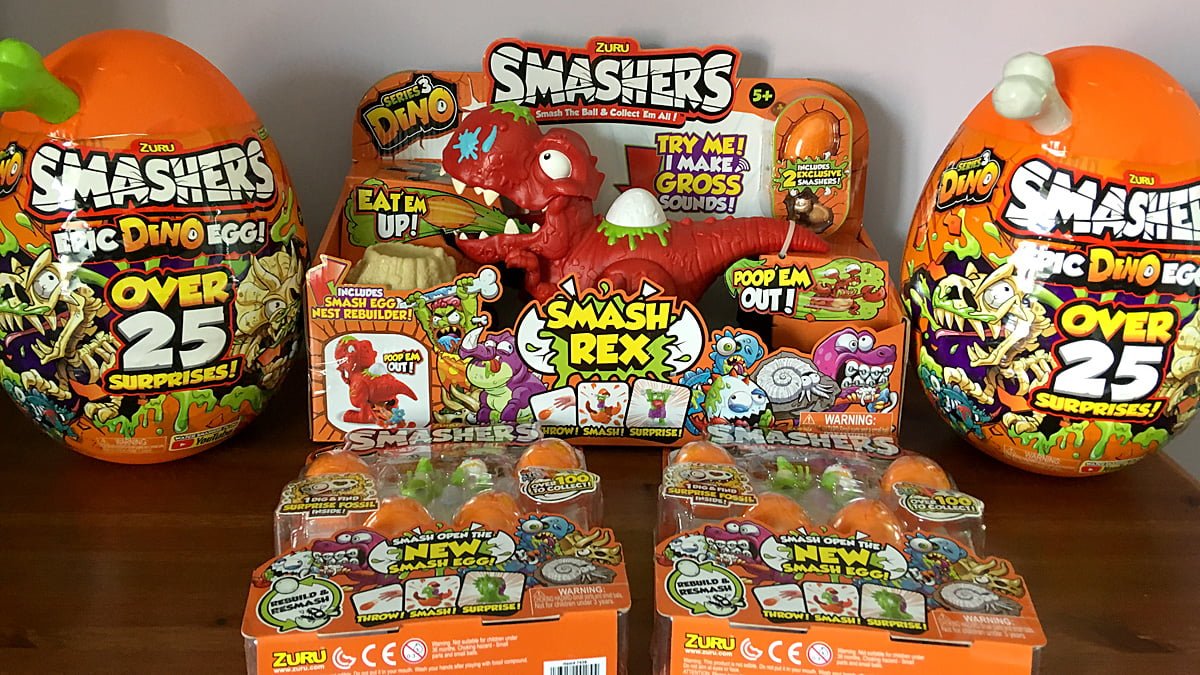 What Is Dino Smashers?

Dino Smashers is the third product series from Zuru’s Smashers blind box collectibles range. Perhaps obviously, they are dinosaur-themed (the previous series were Sport and Gross) and come in a range of pack size options to suit all budgets, from pocket money level small packs to epic sets containing dozens of items. Please note, this post contains affiliate links.

What Do You Do With Them?

The key element in any Dino Smashers set is the Smash egg, so let’s begin there. Each Smash Egg is slightly smaller than a standard chicken egg and made of bright orange plastic. Hidden within is one of over 100 Dino figures from the various sets including Dino Fossils, Robot Dinos, Mutant Dinos, and more. You smash your Smash Egg, breaking it into six pieces to reveal the figure inside, but unlike with many blind box style toys, the Smash Eggs can be smashed and rebuilt endlessly. Occasionally, your figure may be embedded within a miniature Fossil Rock, so you’ll need to excavate it in order to find out which one you’ve found.

This smashing and figure collecting is the core of Dino Smashers, but the other products add more to the family. The Nest Rebuilder is a beige plastic crater that is used to make rebuilding your Smash Eggs a whole lot easier. You’ll get one of these with most of the larger level sets, including the Smash Rex.

The Smash Rex set was the one my nine-year-old son was most excited by. This set includes the nearly eight-inch tall Smash Rex, a cool plastic dinosaur who eats Smash Eggs and poops them back out, complete with sound effects. By placing an egg in front of Smash Rex and using the tail to manipulate the dino’s movements, Smash Rex can pick up a Smash Egg in its jaws, break it apart in its belly, and poop out the shell fragments and contents. It’s hardly the most sophisticated of toys, but kids will love it, or at least they will when it works. We could rarely convince Smash Rex to do his thing properly and frequently had to repeat the actions several times before we would get a fully working run-through. The video below was the most effective attempt we caught on tape.

The Epic Dino Egg was easily my favorite set in the Dino Smashers range and felt like the best value for money. After unwrapping the egg and breaking it apart (it too can be rebuilt) you will reveal a sealed plastic bag filled with goodies. Alongside the standard Smash Eggs and some accessories, you’ll find five sealed packs and a map guiding you through a journey across a dinosaur-filled landscape. Each of the five packs contains hidden bones which, when all have been extracted, can be put together to form a large dinosaur skeleton model.

You’ll begin by digging through your bag of Dino Dirt before moving on to the Fizzy Lava (you’ll want to do this one somewhere you can easily clean up afterward). Next, you’ll need to squelch through the glowing slime then dig away at the Fossil Rock with the handy pickaxe to extract another part. Finally, you’ll explore the Ice Age Putty to reveal the final bones which you can then put together using the instruction sheet to create your dino skeleton model. There are three different Epic Dino Eggs in the Dino Smashers range, each one contains the same set of items but will build into a different dinosaur model at the end and the different ones can be identified by the color of the bone sticking out of the top of the egg.

Once you have finished your dinosaur journey, you’ll be left with your skeleton model along with your Smash Eggs and figures, accessories, and the Glowing Slime, Ice Age putty, and Dino Dirt, which all come in resealable containers (the Fossil Rock and Fizzy Lava are single-use only). We spent a sunny afternoon working through all the elements of an Epic Dino Egg in the garden and I found there was a lot to do in this set with plenty of reusable items too.

Who Will Dino Smashers Appeal To?

While the toilet humor and general grossness of some elements of Dino Smashers will, in all honesty, probably appeal more to boys than it will to girls, there’s plenty here for all kids to love. I know that my Jurassic Park-obsessed eight-year-old girl self would have fallen head-over-heels for the Dino Smashers range. Any kid who is into dinosaurs will love these toys.

In terms of age, I’d point the Dino Smashers range at kids aged around six to ten. My nephew received a pack of Smash Eggs for his sixth birthday, and while he was content to smash them and get to the figures inside, he didn’t have the patience to rebuild the Smash Eggs, so the shells had ended up in the trash by the end of the day. At the other end of that age range, my nearly ten-year-old son played with the figures for a few days but quickly grew bored of them and soon focused only on the slime and putty elements.

Should I Buy Dino Smashers?

As with all blind box products, I’m always wary of investing in anything that brandishes the word “collect” as prominently on its packaging as the Dino Smashers range does. With over 100 of these figures to collect (including the usual rare, ultra-rare, and playset exclusive ones), you’ll soon find yourself being pestered to buy more and more of these things if you have kids that are easily suckered into the “must-have-them-all” mentality. As is standard with these types of toys, the figures themselves don’t actually do anything beyond sitting around gathering dust, and while the Smash Eggs can indeed be smashed and rebuilt endlessly, the novelty of doing so quickly wears off when there is nothing new to discover inside. I do, however, think these would make for excellent Easter egg hunts, as they will comfortably fit candies or other small toys inside them.

For me, the set that gives you the least value is the Smash Rex. While the Rex model is of a good size and surprisingly sturdy, you can’t get around the fact that you are paying out for something to open your eggs, something that can just as easily (and possibly more satisfyingly) be accomplished by simply dropping them from a height. For true T-Rex lovers, it might be a fun addition, but beyond that, the Smash Rex feels entirely unnecessary and, as noted above, we struggled to make it work consistently.

At the other end of the scale is the Epic Dino Egg, which contained a lot of items, kept us entertained for an entire afternoon and more, and felt like by far the best value for money. If I had to pick any set from the Dino Smashers range, it would be this one and I would be happy to pay out for the third and final Epic Dino Egg to complete the trio of skeletons.

Before I wrap up this review, I have to say a word about the plastic waste of which there is a huge amount generated by nearly all of these toys. In this case, the Smash Rex set actually fares best with very minimal plastic packaging, while the Epic Dino Eggs fails abysmally thanks to being wrapped in multiple layers of plastic wrap on the outside, then filled with another plastic bag containing over a dozen items each wrapped in their own plastic wraps and bags. It’s a major problem across the toy industry but one I feel that I need to call out any time I see it, especially as blatantly as this.

In the end, we had a lot of fun with the Dino Smashers range and found that some products offered distinctly better value than others. 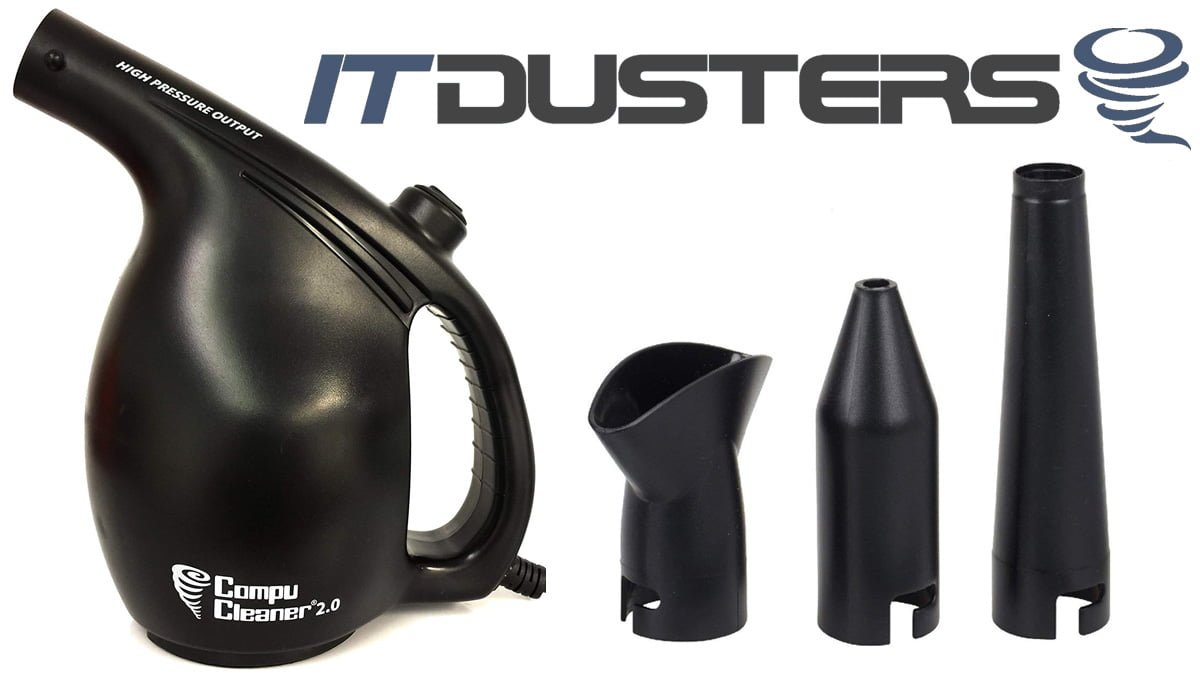 CompuCleaner: A Compact, Mains-Powered Air Duster for Your Home

Toucan Box: Activities For Your Kids Delivered Straight to Your Door