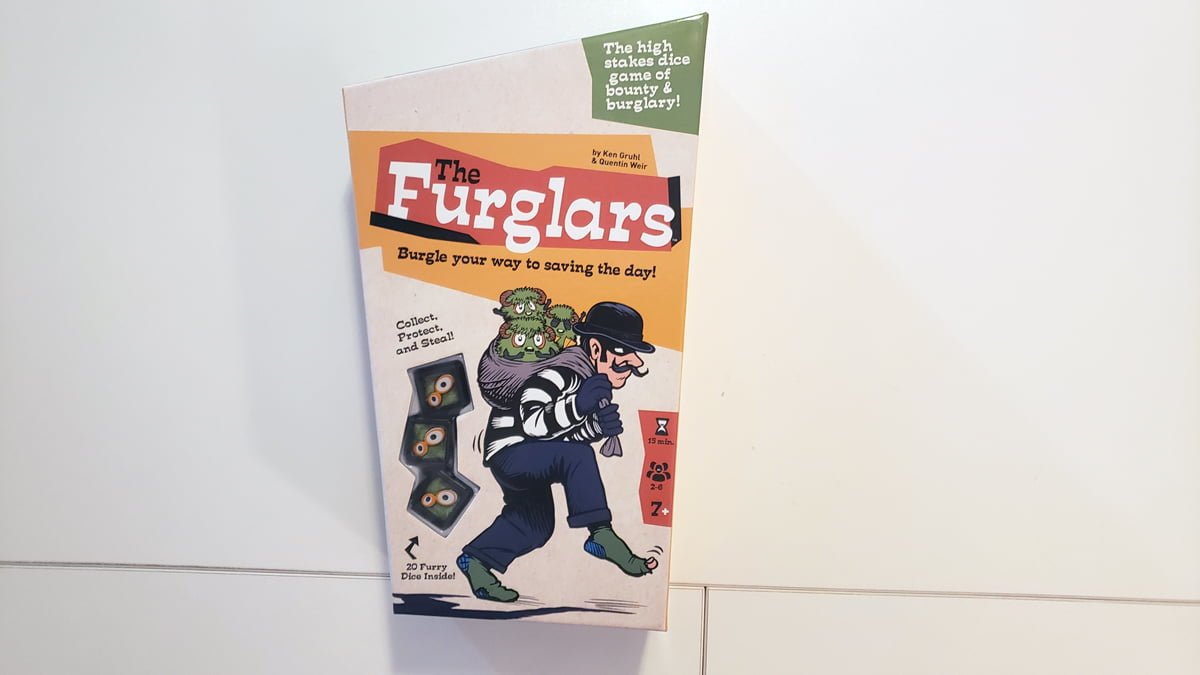 Sometimes finding games that our eight-year-old and our five-year-old can both play is tricky, as five-year-olds don’t have the same strategy level and reading skills. Every so often, we do come across a game that’s good to play with them both. The Furglars, from the same company that created Banagrams, is one of those games, and I received a copy of the game in exchange for a fair review.

The Furglars is a dice-based game for 2-6 players ages 7+ that takes about 15 minutes to play and has an MSRP of $14.99. In the game, players become “Furglars” and try to earn “Bullion Points” by capturing, stealing, and protecting fuzzy little creatures called “Furgles.”

The Furglars contains the following:

The dice are lightweight plastic, but the designs are painted on rather than applied via stickers, except for the “Furgle” side, which is hollow to show the fuzzy Furgle. The Character and Bank Cards are nice, hefty cardboard and should be able to take quite a bit of damage over time. The instruction book is more tag board thickness, which should hold up decently, especially in the hands of kids. The Bullion Bars themselves are colored plastic, but with a game in the fifteen dollar range, that’s pretty typical. My only real complaint is the box has a quirky shape, which makes it a little harder to tuck in nicely on a board game shelf, but isn’t enough in itself to make me pass on the game.

How to Play The Furglars

The goal of The Furglars is to be the first player to reach 15 Bullion Points (21 for 2-player games) while capturing, stealing, and protecting your Furgles from other players.

The Furglars is one of those games that’s very easy to set up. First, set out the Bullion Bank and sort the Bullion Bars into their spaces. Next, let each player pick a Character Card. The different cards don’t grant players any special abilities, they’re just to help keep track of Furgle and Bullion Bars. Finally, each player starts with some Furgle Dice (5 in a 2-player game, 4 for 3-5 players, and 3 in a 6-player game). Return extra Furgle Dice to the box. You’re already ready to play The Furglars.

The Furglars is a fun, face-paced family game that’s pretty easy to catch onto and lends itself nicely to larger group numbers.

After the first round, players do the following actions on their turn:

Gameplay continues until one player reached 15 Bullion points (21 in a two-player game) and is declared the winner.

Why You Should Play The Furglars

The Furglars is a really fun game for families that has enough strategy to not feel dull to parents, but enough luck that younger kids have a fair shot. The one place where I thought there was a hint of disadvantage was whoever goes first is more likely to have their Furgles stolen by the time the Second Round comes along and struggle to earn points in that round, so I might let the youngest player go last. Parents should be aware that part of the game does involve stealing Furgles, and some kids are more prone to getting upset by that than others. That being said, while the game lists the bottom age at 7, we let W, at age 5, play. He quickly caught onto what the pictures on the dice meant, for him, I think it felt like Feed the Kitty with a little strategy and more direct stealing from other players. He did benefit from me pointing out once that if he didn’t focus his stealing on me, I would win the game in a round, but I think younger kids can participate as long as someone is willing to help a little on the strategy end.

The game was fast and fun, I think it ended under 15 minutes each time, and the boys kept wanting to play it again. Since setup is so easy, accommodating a few quick games is not hard at all, and clean up isn’t very involved either. Overall, the play and component quality are what I would expect for something with a price tag of $14.99, and I honestly believe it would make a fun family game addition or gift for another kid. You can get a copy directly from Banagrams or via Amazon.

Week Four of the Kodak and GeekMom Giveaway is Here!

1 thought on “Tabletop Review: ‘The Furglars’”